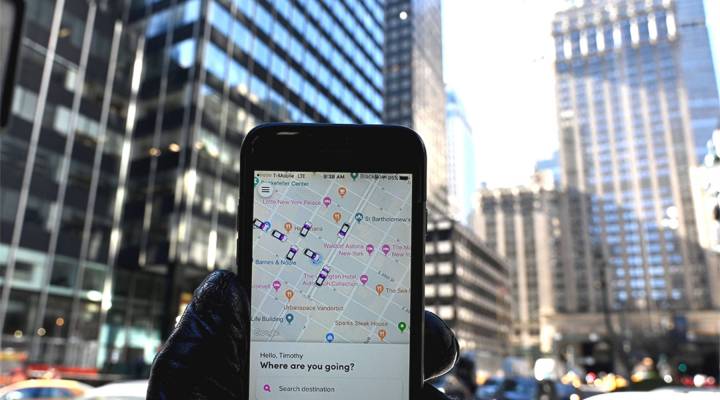 COPY
An iPhone with the Lyft ride-sharing app on it shows cars in the area on Park Avenue in New York City March 26. Timothy A. Clary/AFP/Getty Images
Marketplace Tech Blogs

An iPhone with the Lyft ride-sharing app on it shows cars in the area on Park Avenue in New York City March 26. Timothy A. Clary/AFP/Getty Images
Listen Now

The ride-hailing platform Lyft goes public today ahead of Uber, which is expected to list in the coming weeks. Drivers for both companies went on strike in Southern California earlier this week to protest changes in how their pay is calculated. Lyft’s reliance on drivers is a risk factor it mentioned in its paperwork to go public. Others include new regulations or the possibility it will never be profitable. For every dollar of revenue the company brings in, it winds up 40 cents in the red. Still, Lyft has been able to pick up more riders in the last couple of years, thanks in part to big public stumbles by Uber, which prompted some users to look for alternatives. Marketplace’s Tracey Samuelson asked Faiz Siddiqui, a tech reporter covering transit for the Washington Post, where Lyft goes from here. The following is an edited transcript of their conversation.

Faiz Siddiqui: Lyft is sort of billing itself as “the nice guy” of the ride-hailing apps, the more socially conscious one. Even on the heels of some of that backlash against Uber, Lyft undertook these social campaigns, charitable giving, where you could take a ride and donate a certain portion of that fare to a charity. I think Lyft continues to try to capitalize on that image. Whether that works out for them in the end remains to be seen. But, certainly, they’re going to keep pushing that message.

Tracey Samuelson: Right. We saw this week some drivers protesting pay cuts. There is baked into Lyft’s business model a kind of tension between the worker-contractor, the drivers and the company.

Siddiqui: Yeah, Lyft’s ultimate end goal here is going driverless. Once they do that, you can give rides on the cheap, I’ve heard in the range of 20 cents a mile. It seems like the companies can achieve profitability at that point.

Samuelson: You mentioned the goal of going driverless. We know what Lyft does today. We know that it’s an app that links passengers and drivers for on-demand rides, but what Lyft could become, whether it’s driverless or perhaps a more regulated company, we don’t really now. What are investors buying in this IPO?

Siddiqui: They’re sort of buying hope. They’re buying on opportunity. The consistent line that I’ve gotten from investors is somewhere between, “Why would you ever invest?” to “Do invest. It’s potentially really lucrative, but don’t put all your eggs in one basket.”

Samuelson: What’s Lyft going to use the money for?

Siddiqui: That’s the question. With a company like Tesla, there’s a more direct product application here. You go public, you have the money to do something like build a consumer passenger vehicle, like the Model 3. With Uber and Lyft, the question is: Does this mean the era of investor-subsidized fares that are maybe super cheap, are those fares over? My sense is no. But it could be the beginning of that transition.

Samuelson: When you look at the risks facing the company, the potential headwinds, how big a factor do you think labor is in terms of drivers organizing or potentially a court ruling that drivers are employees, not contractors?

Siddiqui: Those things are huge. That’s the core of their overhead costs. They don’t really have fleets of cars that they operate, with some exceptions. Drivers are the key question here. If anything happens to change the status of drivers from contractors to employees, if there’s a court ruling that mandates better treatment of drivers, more investment in drivers, a living wage, those would be potentially massive for a company that relies on this type of model.

There are about a dozen and a half risks Lyft listed in the company’s rather candid registration statement, which you can read here.

The Information also put together a paywalled list of the people who are going to make a lot of money today. A $30,000 investment in 2007 is now worth $100 million. But what does that kind of wealth do to a city when it’s not just Lyft and Uber employees, but also Slack, Postmates, Pinterest and Airbnb? The New York Times predicted earlier this month that San Francisco will drown in millionaires. 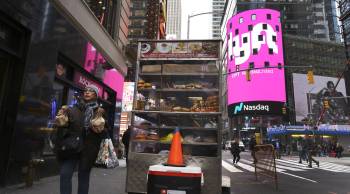 Lyft issues IPO, but its path to profitability is still unclear