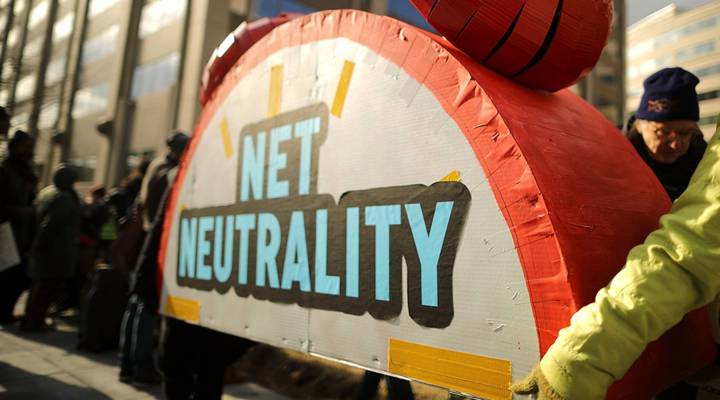 On Wednesday, Democrats in Congress introduced a bill that would bring back the 2015 net neutrality rules that the Federal Communications Commission threw out in 2017. The rules prevented internet service providers from discriminating against certain types of online content. Lots of people think that legislation is the only way to settle the question of net neutrality long-term. That’s because, right now, the FCC is in charge of either regulating internet service or deciding not to regulate it. And whether the FCC wants to regulate the internet depends almost entirely on which political party is in charge. But this new legislation doesn’t really fix any of that. Host Molly Wood talked with Tom Merritt, host of the Daily Tech News Show podcast. He says this comes down to how internet service is legally defined. The following is an edited transcript of their conversation.

Molly Wood: For people who have forgotten what things were like under the Obama administration, under Tom Wheeler’s rules issued in 2015, what would this put back?

Wood: Do you think we can expect to see something else? Do you think that this is the end of Congress’s action on net neutrality?

Merritt: No, I think this will probably end up being a political football. I don’t think this is going to pass. I don’t think it’s going to change anything. Even if it did pass, there would still be attempts to roll it back again, if the Republicans can figure out how to do that.

Wood: There’s an argument to be made that this is the minimum Democrats could do on net neutrality. It’s a good PR move for proponents, but when it comes to a lasting solution, it’s slightly weak.

Merritt: Yeah, it’s the minimum they can do, to just say, “We’re going to Ctrl+Z on what the Republican administration did and go right back.” They’re not typing out anything new. They’re not adding any new legislation. They’re just trying to undo.

Wood: If you had to speculate, why do you think we’re not seeing something more formative? Isn’t this an opportunity to actually write legislation, instead of just undoing this? There are plenty of ideas out there for how it could look.

Merritt: Writing legislation is still ongoing. There are some Republican and Democratic congressional representatives and senators who are working on plans out there. But this is easier to bring to a vote, especially because it was done once before. This is something they can say they did without having to go through the gargantuan effort that it would take to craft brand new legislation into being.

Gizmodo has a good piece on how, if the Democratic legislation came to a vote, if it passed and if President Trump signed it, the legislation as written would prevent the FCC from overturning the rules again.

It would also answer a question that has, in previous administrations, let the FCC sidestep the question of whether it has to deal with net neutrality or not. It would specifically give the FCC the authority to not only regulate internet service but to enforce regulation with fines and penalties. The current chairman Ajit Pai, who led the charge to overturn the 2015 rules and who thinks they stifle innovation and ruin everything for the telecom industry, would probably not be super excited by that outcome. In fact, his office issued a strong statement on Wednesday saying it would be a mistake to return to this “heavy handed regulation from the 1930s.”

Back in 2017, Pai told Marketplace Tech he thought Congress probably should take a role in laying down some long-term rules. But, clearly, putting him back in charge of rules he dumped immediately after taking over the FCC was not what Pai had in mind.