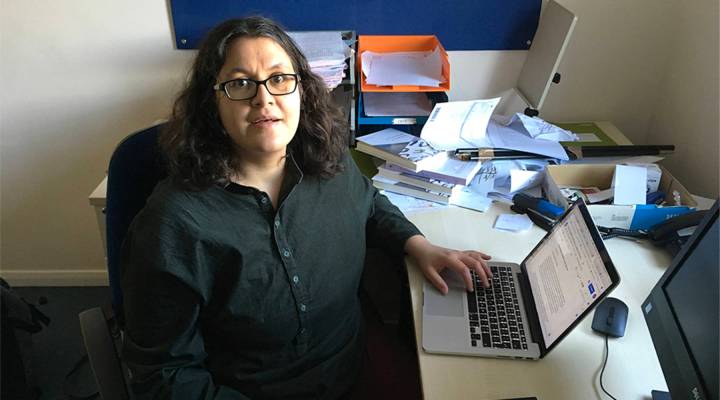 COPY
Helen De Cruz, a senior lecturer at Oxford Brookes University and immigrant from Belgium, said Brexit has changed the way she thinks about her finances and immigrant status. Courtesy of the BBC
Brexit

Helen De Cruz, a senior lecturer at Oxford Brookes University and immigrant from Belgium, said Brexit has changed the way she thinks about her finances and immigrant status. Courtesy of the BBC
Listen Now

With Brexit day approaching on March 29, the fate of more than two million European immigrants in the United Kingdom is unclear. The Freedom of Movement policy from the European Union has allowed EU citizens to live and work in any member state. But ending the policy was a big motivator for Brits who voted for Brexit and wanted more restricted immigration to the U.K. Helen De Cruz is a senior lecturer in philosophy at Oxford Brookes University. Originally from Belgium, De Cruz told our partners at the BBC about how Brexit has changed the way she thinks about her finances and immigrant status.

My name is Helen De Cruz and I’m a senior lecturer of philosophy at Oxford Brookes University.

Originally I’m from Belgium. I grew up in Belgium. I moved to the U.K. first in 2011. I was very much taken with Southeast England, and Oxford in particular, and I loved things like the architecture, the climate, the people.

I think it’s fair to say that the referendum result, when it was announced, was a big blow. So I felt really integrated; for instance, I regularly went to church, local church, and I even was part of the choir. But afterwards, I kind of felt like I’m not really truly part of these communities. I’m not really truly welcome here. I mean, sometimes you’d hear people say things like, “now, aren’t you leaving yet? I thought we voted you out.” But there aren’t many people who said that.

In terms of financial decisions, the main thing that Brexit has done is put me off buying a house, and it was kind of sad because my father-in-law recently died, and we have a big, heavy painting that he made. And we were sort of looking forward to finally not be in rented accommodation anymore, but have our own house because that would allow us to hang that heavy painting because you would have to damage the wall in order to hang it. And the fact that it’s still now upstairs, sort of wrapped in blankets to protect it, is kind of a testament to the fact that we sort of put our lives on hold and that Brexit has put our lives on hold.

I have not applied for settled status. Nevertheless I will apply in due course because I don’t want to become an illegal immigrant. I think it will be difficult to apply. Also there’s no clear right of appeal, there’s no clear instructions about what would happen if, for some reason, even though it’s difficult to imagine given that I’ve always worked here and so on, but what if for some reason something goes wrong, and the application is denied? I have no idea what to do in that case.

This series only works with your help. Let us know how your economy is doing by filling out this form, and your story may be featured in a future My Economy.