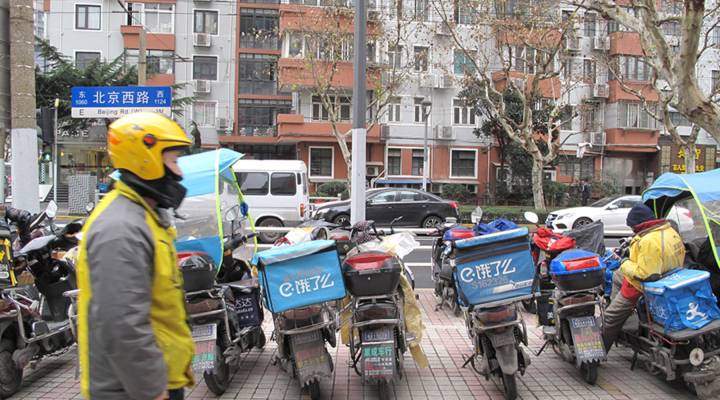 China is celebrating the Lunar New Year this week, and Chinese President Xi Jinping, in his annual holiday speech, gave special thanks to the hardworking people delivering e-commerce packages and food. These workers have become an integral part of daily life in cities like Shanghai.

According to estimates in the Chinese state-run media, there are some 3 million couriers and roughly 7 million more delivering meals for food delivery apps.

Zhang Xu has worked for the two biggest food delivery apps, Ele.me and now Meituan. The 26-year-old agreed to let Marketplace tag along on his delivery run.

This is how the hour unfolded:

9:18 a.m.: Zhang arrives at a food court in central Shanghai, which is the designated hub for his delivery zone. He logs into the Meituan app and waits for orders.

As full-time staff, he is required to work at least six hours a day, but there is no fixed start time.

9:21 a.m.:  He receives three food orders. The app generally groups the delivery in the same direction to maximize efficiency.

“Our salary depends on how much customers order. Since our delivery area covers a lot of nice shopping malls and office blocks, customers tend to order more expensive items. If I make a lot of deliveries, I can earn an average of 10 yuan [$1.50] per order,” Zhang said.

The money he earns in Shanghai is at least 60 percent more than what he can make doing the same job in his hometown in northeastern China’s Shenyang city.

It’s unusual for Zhang to receive so many at this hour, but there is not enough food delivery staff. Many of his colleagues have gone back to their hometowns for the Lunar New Year holiday week. Zhang is working through the holidays because the company will give him an extra 5,000 yuan ($740).

Zhang heads out to pick up the food on his electric bicycle, which is the fastest way to get around car-choked Shanghai.

He zips across the street to a dumpling shop to pick up the first order, but the food is not ready yet.

Zhang Xu is one of the top food deliverers in his district, earning more than the average white-collar salary.

9:33 a.m.: Zhang picks up a second order from a cake shop chain. Five seconds later, he’s back on his electric bike.

9:36 a.m. He returns to the dumpling shop to pick up the first order. As the restaurant staff packs up the food, Zhang checks the map on his smartphone.

“While I’m waiting, I will get familiar with the route to improve the efficiency of my deliveries,” he said.

9:41a.m.: He arrives at an office block and parks his electric bike in the underground parking lot. He sprints up the stairs.

Zhang must pick up the pace because at this point, he has less than 30 minutes to deliver all the meals. He picks up the third order from a Western casual dining restaurant.

9:47 a.m.: Zhang zigzags through traffic and pedestrians at a big intersection, then parks his electric bike on the side of the road. He runs in to a noodle shop to pick up the fourth order.

There are many restrictions on where electric bikes can go, stop or park, so couriers and delivery people risk traffic fines or worse.

Zhang’s colleagues have had their electric bikes stolen, which is a big financial hit because delivery staff must buy their own electric bikes. He has purposely bought a second-hand electric bike that looks worn in hopes that it will be less attractive to thieves.

9:52 a.m.: Zhang calls his first customer to come down his office block to pick up the food.

“Some office buildings don’t allow outsiders to step in, while others will block delivery people from taking passenger elevators, and it will take too long to wait for the cargo elevator,” Zhang said. At times, he has been barred by building security from entering while wearing a bike helmet or delivery uniform. These tiny obstacles slow down Zhang’s delivery time.

9:53 a.m.: Construction around the office block has made it hard for Zhang to find the entrance. The first customer calls to ask where he is.

Dealing with customers is a big challenge in the job. If customers are not happy, they can leave a bad review on the app.

“The company will fine the head of our delivery zone if there are too many customer complaints on the platform, then we, in turn, get penalized 50 yuan [$7.40] for each bad review,” Zhang said.

Zhang has received a bad review for forgetting a pair of chopsticks for the customer before.

According to a 2017 report by state-run news agency Xinhua, more than 150 million people — nearly half the population of the United States — use food delivery services in China.

Since many people use food delivery services, Zhang believes there is a broad understanding in society for how hard his job is. He feels safe to leave his food box unlocked on his bike sometimes while rushing to make a delivery. However, he did have a food order stolen from his electric bike once before.

10:01 a.m.: The third delivery is complete on time because the customer came down from the office building to pick up the order.

Sometimes customers will give Zhang a small tip, which is not customary in China. There are other perks to the job.

“The best thing happened at a Western restaurant,” Zhang said. “I picked up an order at 10:30 p.m. and the boss had made extra food. He gave it to me for free. That order probably costs a lot, maybe about $10. It was very delicious. Grilled chicken and rice. That was my first proper Western meal.”

10:06 a.m.: Zhang rides up the sidewalk, honking at a pedestrian to get out of the way in order to complete his last delivery on time.

In Shanghai, pedestrians need to remain alert, especially during mealtimes, for delivery people on electric bikes coming from all directions.

“There is no secret to doing this job well. It’s just persistence. If you work more than 10 hours a day, then you will have a very good salary at the end of the month,” Zhang said.

11:00 a.m.: The lunch rush starts. Zhang will have to complete twice as many deliveries in the same amount of time.

He rarely takes days off, but he will not continue this lifestyle for long. Zhang saves 80 percent of his earnings in hopes of buying a shop one day.