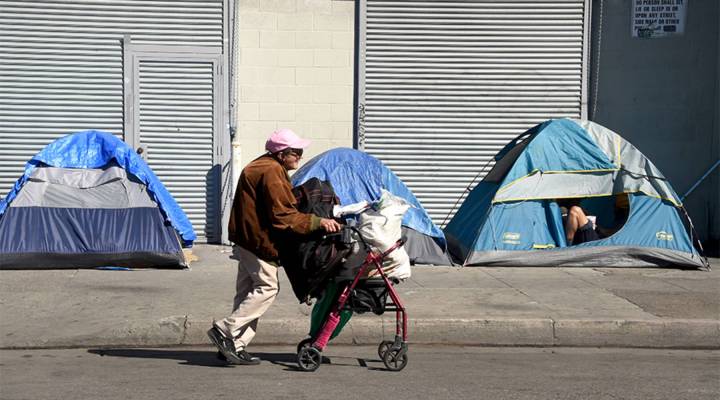 How many homeless people live in any one area? To find out, local governments conduct counts every year by order of the Department of Housing and Urban Development. Officials partner with nonprofits and volunteers to collect the data needed to apply for federal dollars to address homelessness. The count includes those staying in shelters and transitional housing.

In odd-numbered years, like this one, people also go out to count the homeless population sleeping on sidewalks and in cars. It’s a massive undertaking, especially in regions with high levels of homelessness, like Southern California. This year, some areas near Los Angeles are using an app to improve the quality of data collected. It’s a shift from the pen and paper method still used by most. Marketplace’s Jed Kim talks about the new tech and how its being used with Jill Replogle, the Orange County reporter for Southern California Public Radio. Replogle downloaded the app to check out how it works. The following is an edited transcript of their conversation.

Jill Replogle: When you get to a spot you pull up the survey, your location shows up on a map and so it’ll mark exactly where you took that survey. You go through a series of questions and submit it. Then when I got back to the deployment center … you can see it actually populating in real time. They had a projector up and they were showing the surveys coming in and the numbers counting up. You could see on the map where all of the people who took the surveys were located across the county.

Jed Kim: This is a big difference from years past when it’s been, as I understand, pen and paper. What benefits does this bring to the process for local governments?

Replogle:  It’s still done with pen and paper in a lot of places. For one thing, it [the app] eliminates the tedious transferring the answers from paper to a database. And it eliminates the possibility for human error that can happen when you’re transferring that data, and especially in terms of the location because people would mark their location on a map but it might not be the exact location where they were. So this really gives authorities an accurate look at where people are sleeping on this particular night.

Kim: I’ve got to imagine that it’s got to be faster…

Replogle: So much faster. We’ll have a preliminary count at the end of the day and then it still takes a few months for them to cull through the data, make sure there’s no duplicates and analyze what they have and then send it to the federal government. But we can at least have a pretty good count immediately which is so much better than it used to be.

Kim: For local governments, what’s the incentive to have this better data?

Replogle: Well for one thing local governments want to know who is homeless, where they are, whether they’ve been living in the county for a long time. They need that information so that they can better target their resources towards addressing homelessness and so that they can get money from the state and the federal government and possibly nonprofits to help address homelessness. We the public and our elected officials want to know if what they’re doing to try to address homelessness is working.

Click on the audio player to listen to the interview.