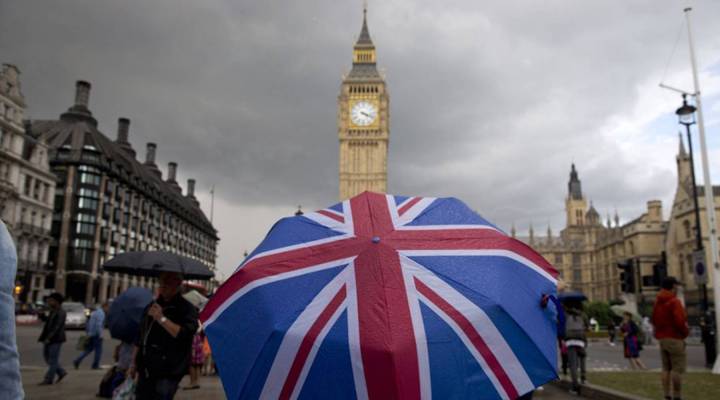 COPY
A pedestrian shelters beneath a Union flag-themed umbrella near Big Ben and the Elizabeth Tower at the Houses of Parliament in central London on June 25, 2016, following the pro-Brexit result of the U.K.'s EU referendum vote. JUSTIN TALLIS/AFP/Getty Images
Brexit

A pedestrian shelters beneath a Union flag-themed umbrella near Big Ben and the Elizabeth Tower at the Houses of Parliament in central London on June 25, 2016, following the pro-Brexit result of the U.K.'s EU referendum vote. JUSTIN TALLIS/AFP/Getty Images
Listen Now

British Prime Minister Theresa May’s Brexit deal cleared another hurdle in Brussels on Sunday. A summit of the remaining 27 member states approved the agreement negotiated by May to settle the terms under which the United Kingdom will formally leave the European Union on March 29 next year.

But this is not yet a done deal. The British Parliament must give its blessing — in a vote expected next month — and there’s no guarantee that it will do so.

May’s deal is highly contentious. Critics say it will turn Britain into a colony, bound by EU rules and regulations but without a say in deciding those rules and unable unilaterally to walk away from them.

Many Brexiteers say it betrays the result of the “Leave” referendum in 2016.

Many Remainers, on the other hand, claim May’s deal is vastly inferior to EU membership, and they’re calling for a second referendum to give the people a chance to call the whole thing off.

“I just think we need a people’s vote because leaving the EU on that stupid deal that Theresa May has put together … it’s just rubbish,” said Polly Ernest, who owns a guest house in rural England and was demonstrating against Brexit outside Parliament last week. “We lose so much with this deal. And we look stupid,” she added.

Steve Bray, a coin dealer by trade, was also demonstrating against Brexit. He also dismissed May’s deal as a “shambles,” calling for a second referendum.

“Nobody is getting what they voted for. We have to put this back to the people because the government cannot sort this mess out. It’s down to us, the people,” Bray said.

Many other business people echo that call. A recent opinion survey indicated that 57 percent of U.K. companies — from mom and pop stores to the biggest multinationals — would like to see another vote. And that includes the owners of British Boxers, a small British clothing company, purveyor of what it says are “very patriotic underpants.”

Although her brand taps into British heritage, self-reliance and fighting spirit, Price relies for the company’s full range of upmarket underwear and nightwear on an intricate European supply chain.

“We have piping that comes from one of the best piping factories in the world. That’s in France. We have fabric from Holland, from Portugal, from Italy. And that’s just to get the goods made,” Deborah Price said. “When it comes to exporting the finished product, Europe is an increasingly important market for us as well.”

Deborah and Darren Price are terrified of the tariffs and trade restrictions they may face after Brexit, and they would like the British people to be given the chance to change their minds and vote to stay in the EU.

“Given the range of information we have now, given the more full knowledge of the impact of ‘leave’ on the British economy, we want a second referendum. And I think that second referendum will result in a remain vote,” Darren said.

If Parliament rejects May’s plan next month, Remainers like Darren and Deborah Price want the EU to delay Britain’s departure date so the U.K. can consult the people again.

Brexiteers balk at that, however. They were also protesting against May’s deal outside Parliament last week. But they deplore the very idea of a second referendum and would prefer the U.K. to leave the bloc without a deal, if necessary. John Longworth of the hard-line Brexit campaign group Leave Means Leave said that if Britain now pleaded to remain in the EU, it would soon be sucked into a United States of Europe.

“We would face having to agree to join the eurozone, the European Army and all the other things that the European superstate are heading towards at the moment,” he said. “And our budget contributions would shoot up. We’d certainly lose the rebate that Prime Minister Margaret Thatcher won for us in the 1980s.”

May has brought Leavers and Remainers together but only in opposition to her plan. On the issue of a second referendum, the two sides are further apart than ever.  Matthew Jenkins, who joined the small pro-Brexit protest outside the House of Commons, said the call for a rerun of the referendum is an attempt to overturn the biggest vote in British history.

“The people have already spoken,” he said. “Quite decisively. It was the biggest turnout we’ve had for anything.”

And his fellow protester Patricia Wilmitt said millions of voters would feel cheated if the Remainers got their way.

“People came out in their hundreds and hundreds of thousands two and a half years ago, thinking ‘This is my chance to make a difference.’ They voted to leave the EU. And then to find they’re going to be ignored. It means we do not live in a democracy,” Wilmitt said.

Britain’s Brexit agony drags on with weeks and perhaps months of political and — possibly — economic unrest ahead.