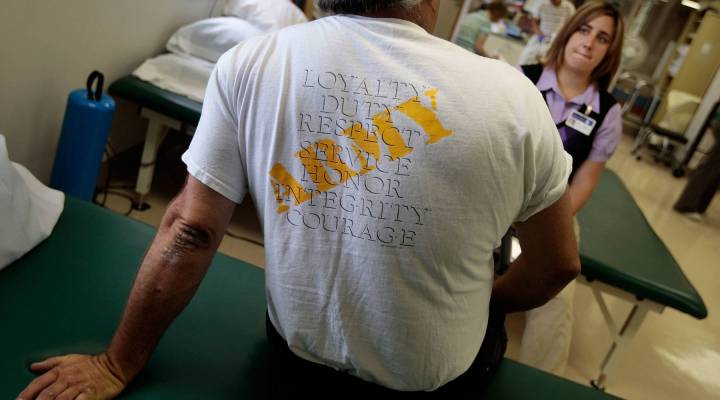 Justin Miller served for 11 years in the U.S. Army and deployed twice to Iraq. He was medically retired, suffering from severe PTSD.

He almost became one of the 20 military veterans and active service members who die by suicide every day. He was saved, in part, by a serendipitous phone call from his friend Chris Mercado, a fellow vet, who helped talk him back.

Now Miller and Mercado have collaborated with a team to build the app Objective Zero using social networking technology to make those kinds of vital connections between veterans immediate and easily accessible.

“While doing research, we found out that when most veterans decide to commit suicide, they do it in the first five minutes,” Miller said.

The two friends knew they needed something that could help veterans in less than five minutes.

“We need something that’s instant and anonymous,” Miller said.

The app is designed so you can sign up as a user, someone seeking help. Or you can be an “ambassador,” a trained volunteer who is there as support. Anyone who uses the app can choose and switch between the two positions.

“So one day I’m having a bad day. I can go on as a user. Another day I’m feeling good, I’m on top of the world. I am willing to listen. I can switch over and become an ambassador,” Miller said.

Users have sent over 16,000 text messages and made more than 350 hours of phone calls.

Objective Zero is also developing an algorithm allowing a veteran to opt in to a support network. Friends and family could then be alerted if a user is showing signs of struggling, such as dramatically changed sleep patterns or unusual internet searches.

Meanwhile, the Department of Veterans Affairs, which is the largest health care provider in the United States, is also using apps to help veterans struggling with PTSD.

Supporting veterans’ loved ones can have significant impact as people cope with the return to civilian life after military service, according to Jason Owen, a clinical psychologist with the VA, who works with the National Center for PTSD to develop mental health apps for vets.

“One of the biggest shortcomings for veterans is that their family members are often not actively included in their care despite the family member being the person that’s really there and available to deliver 24/7 support,” Owen said.

The center surveyed over 240 family members to get feedback on the apps and has since released a second version of its PTSD Family Coach app to provide tools that are explicitly for family members.

All of these apps are available at the usual app stores. The VA’s mental health apps here.