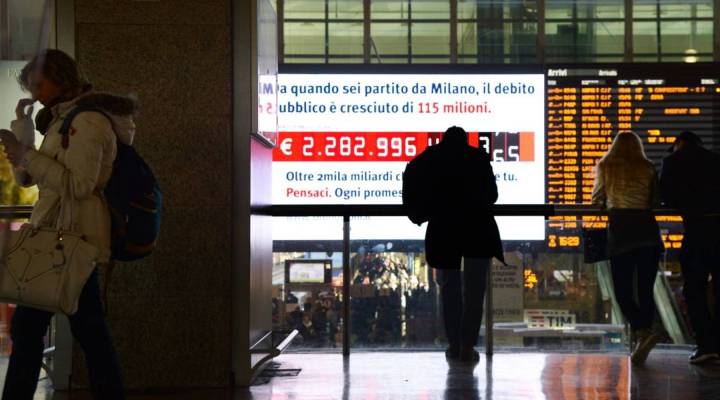 The European Union has rules for its member countries on how much debt they can go into. Those member countries do not always follow them. Italy especially has run afoul of EU rules on deficit spending and is facing a budget deadline on Tuesday.

For better or for worse, here in the U.S., we don’t have a strict definition of too much debt, but Matthew Klein, an economics commentator at Barron’s, says Europe’s definition is basically made up, and he came on to talk about it. Below is an edited transcript of the interview.

Sabri Ben-Achour: Italy is proposing a deficit of two 2.4 percent. Europe wants that number to be .8 percent. That seems to be a very minor difference that’s resulted in a big diplomatic flare-up. Where did Europe get this definition for what’s an acceptable deficit to begin with?

Matthew Klein: So the Europeans are thinking primarily about how to reduce Italy’s debt because they think that Italy’s government debt at 130 percent of GDP is too big. They came up with a definition about 30 years ago that debt should be 60 percent. That definition is not based on economic analysis; it’s based on what was the average at the time in Western Europe.

Ben-Achour: The European Union does have a certain amount of flexibility to allow countries to go into little more debt when they need to because countries need to do that when they’re in trouble and support their economies, and they can pay it off later. But Europe doesn’t actually believe that Italy is in trouble. Why is that?

Klein: So the reason is that the flexibility that they give is based on a mathematical calculation relating to inflation, and the problem is that this doesn’t really work well for countries that have had severe depression. Italy’s problem is that even though the economy is significantly smaller now than it was 10 years ago, the European commission’s data imply that Italy is actually fully recovered, and the Italian government disagrees with that assessment.

Ben-Achour: The fact that there are such divergent assessments between member countries and the E.U. as to how the individual economies of that block are doing does not bode well for a union that is trying to stick together. Is there any attempt to resolve these definitions that are so arbitrary?

Klein: In terms of the flexibility provided by the treaties, it seems like it’s going to be very tricky because you have a large bloc of countries within Europe, particularly within northern Europe, that has a view that government debt is a fundamentally destabilizing force in an economy and should be reduced as much as possible in all circumstances. That is a very extreme view. It’s not what most normal economists would think is sort of the way governments should run their policy in sort of a default state, but that is effectively what has been baked into the treaties.