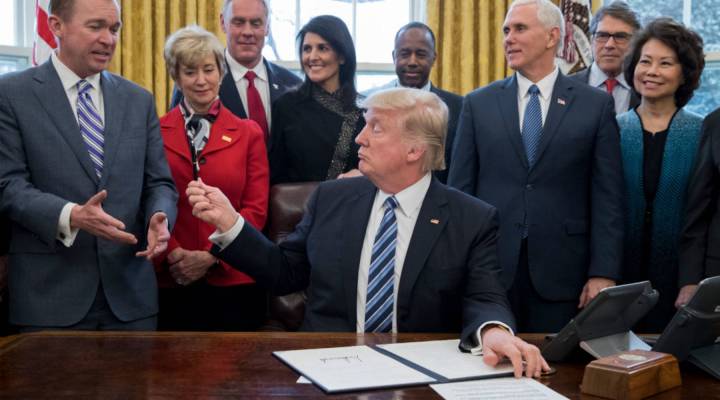 President Donald Trump, who created a business out of licensing his name, recently tried his hand at branding something else: the North American Free Trade Agreement.

The United States, Canada and Mexico struck a deal earlier this month to form the United States-Mexico-Canada Agreement, or USMCA, which still bears many similarities to NAFTA. Even though USMCA may give American farmers greater access to Canada’s dairy market or it may require more of your car parts to be made in North America, critics say it’s largely the same deal.

But Trump, who called NAFTA a “job-killing disaster” on the campaign trail, might not sound very convincing to his voter base if he simply said he “tweaked” NAFTA or updated a few things. A new title is a political tool.

“If you want to make a claim that you’ve accomplished something, it’s helpful to change the name,” said Hans Noel, an associate professor of government at Georgetown University. “Now Trump can say, ‘NAFTA was the worst deal ever, and I’ve gotten rid of it, and now I have something else that’s new.’”

This isn’t the first time Trump or his administration have changed the names of various policies, agencies and initiatives — sometimes just switching a couple of words or stamping out terms that reflect ideologies they may not like.

Take the Consumer Financial Protection Bureau (CFPB), which recently got changed to the Bureau of Consumer Financial Protection (BCFP). Or the President’s Council on Fitness, Sports and Nutrition (PCFSN), which was renamed as the President’s Council on Sports, Fitness and Nutrition (PCSFN). You didn’t read the same title twice: “Sports” and “Fitness” were the only terms that got switched.

Changing the name of a government entity may reflect changed priorities, a shift in the direction it’s going in, or an attempt to show you’re in control, according to Dawn Lerman, a business professor at Fordham University.

“Language reveals something about mindset,” she explained.

Minor shifts under the Trump administration

Trump’s interim pick to head the CFPB, Mick Mulvaney, switched the name to the BCFP earlier this year, arguing that was its original name in the text for the Dodd-Frank Act, a bill that authorized the creation of the bureau.

He’s not wrong. That is what Dodd-Frank refers to it as. But the change might be a jab at Massachusetts Sen. Elizabeth Warren, who proposed the agency in the first place under the Obama administration.

“The CFPB doesn’t exist. The CFPB has never existed,” Mulvaney said at an American Bankers Association conference. “I’m not sure who made that decision. I think I can guess; she might be in the Senate.”

The name change might also be an effort to emphasize the bureaucratic function of the agency, and downplay the “consumer” aspect, said Dietram Scheufele, a life sciences communications professor at the University of Wisconsin-Madison.

The Trump White House isn’t the only administration that’s decided to rename a government group, though.

“It’s not an uncommon thing for agencies or departments to sort of be reorganized, or to change missions,” said Lynn Ross, a teaching professor at Georgetown University.

The Obama administration had changed what was then-called the President’s Council on Physical Fitness and Sports to the President’s Council on Fitness, Sports and Nutrition in order to emphasize healthy eating. In line with its reversal of other Obama-era decisions, the Trump administration then flipped the words “fitness” and “sports” to emphasize the latter. Ivanka Trump wrote an op-ed for NBC News back in February stating that “we must break down barriers to youth sports participation.”

Laurel Sutton, a linguist who co-founded the brand naming agency Catchword, said placing “sports” first may be a nod to Trump’s voter base. (Sports viewers, in general, lean Republican, according to a study from National Media Inc.)

Word order also mattered in the naming of USMCA, with Mexico and Canada trailing after America.

“He [came] up with a name that promotes his own ideology: Which in this case is ‘America First.’ So if it’s going to be an agreement, he’s gotta put the U.S. first over and above everybody,” Sutton said.

Focusing on the U.S. as its own entity may be why he decided to nix the words “North American” from the pact.

“NAFTA is North American, so it’s just everybody and it’s got an umbrella term for it. Whereas this has each country in there in its pieces, which is much more consistent with the administration’s approach to think about things as U.S. interacting with other countries, and we’re not part of some bigger thing,” Georgetown professor Hans Noel said.

The Trump administration has also changed the names of various environmental groups, taking out the terms “clean energy” and “climate.”

While these name changes seem minor, they arguably reflect the Trump administration’s distance toward policies that tackle climate change. Last year, Trump pulled the U.S. out of the Paris climate accord, an international treaty aimed at curbing greenhouse gas emissions. And in the face of a new climate report from the United Nations about the consequences of climate change, Trump expressed suspicion and said he wanted to know which group “drew it.”

A change in name may highlight the real change going on — a shift in policy or a change in the law. But the symbolism is still important.

“Naming is a lot more complicated than people think. There’s the part of naming that’s just about labeling things, like calling something accurately what it is. But then there’s the strategic part of it, where you’re trying to change hearts and minds,” Catchword’s Sutton said.