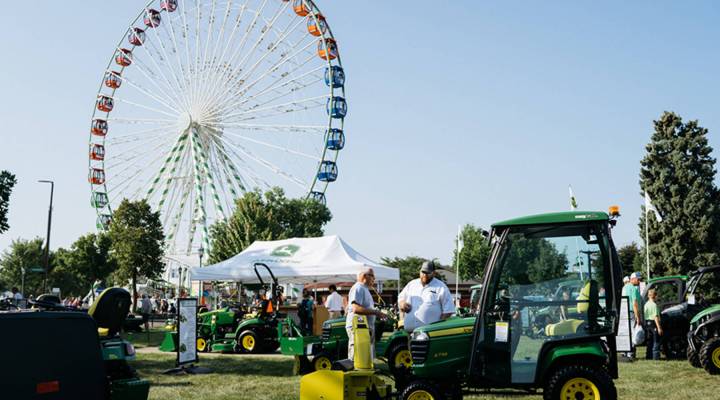 On the first day of the Minnesota State Fair, hog farmer Wanda Patsche is volunteering at the swine barn exhibit, where a visitor can pet piglets, see different varieties of hogs like the Chester White, and pick up a free paper headband with pig ears.

One of the things on Patsche’s mind as she talks to fairgoers: the economic plight of farmers.

Patsche raises more than 4,000 pigs a year in Welcome, Minnesota. Retaliatory tariffs Mexico and China have placed on U.S. pork products are hurting farmers like her who depend heavily on export markets. She’s getting less than $100 a pig today. That covers the cost of the piglet and the grain needed to help it reach market size, but little else.

“We’re probably losing $30 to $40 a head. We’ve got to get the tariff situation figured out for our country,” she says. “We can go a little while but if it’s extended, we’re going to see farmers going out of business.”

Volunteer Alex Murdock holds a 9-day-old piglet as she greets visitors to the “Oink Booth” at the Minnesota State Fair in Falcon Heights, Minn., on Sunday, Aug. 26, 2018.

A $12 billion agricultural bailout the Trump administration announced this week might provide some relief but most farmers, it seems, would rather get a good price for their crops than take a federal check. For now, Patsche is cheerfully encouraging state fairgoers to buy pork, even as she feels battered by the trade war.

“We’re really very proud of what we do, we love growing food for people, and I’m just like, open those markets up for us, let us do what we do best,” she says.

Nearly two million people visit the 12-day Minnesota State Fair every year. Visitors can take in live music, eat a lot of fried food and sweets, hop on carnival rides, and take in exhibits that celebrate the state’s agriculture industry. The State Fair is Minnesota’s gathering place, where citizens and politicians — they have a big presence at the fair — let their hair down, but also discuss the big issues of the day. Like the ag economy.

The U.S. Agriculture Department says net farm income has fallen 50 percent since 2012, in part because of declining crop prices. Now, many farmers have to deal with retaliatory tariffs from U.S. trading partners, on products like soybeans and pork.

“Being kicked when down is kind of how it feels,” says southern Minnesota farmer Glen Groth, who’s checking out youth farm exhibits at the fair.

Groth worries that a vital market for his soybeans — China — will disappear if the trade war lingers.

Glen Groth, a dairy and crop farmer from Ridgeway, Minn., poses for a portrait outside the 4-H building at the Minnesota State Fair in Falcon Heights, Minn., on Thursday, Aug. 23, 2018. Groth says he hopes trade disputes can be worked out within the next six months to prevent U.S. soybean farmers from losing key export markets.

“Other regions of the world, I feel, will start to pick up America’s slack,” he says. “There’s a lot of undeveloped land around the world that could be brought into soybean production.”

President Donald Trump handily won Minnesota’s farm country in 2016 and he still has a lot of support there. Farmer Lorn Wallin is hanging out by the fair’s milking parlor in a bright red “Make America Great Again” T-shirt. He says Trump is already helping farmers by rolling back regulations that affect them. And he’s cheering the Trump administration’s trade moves.

“I hope that they stand their ground,” he says. “That probably isn’t what you’d expect to hear out of a farmer.” Wallin says when this trade war is over, farmers will be better for it.

You’ll get a different take on tariffs from many Minnesotans who make their livings from mining, like Bob Ryan. He’s working at the fair’s United Steelworkers booth, handing out insulated sleeves for soda and beer cans.  Ryan says he understands why many food growers are opposed to recent U.S. trade policy.

“I feel terrible for the farmers because of decisions that are made,” he says.

But he supports U.S. tariffs, specifically the ones on steel and aluminum imports. It was just four years ago when nearly 2,000 workers in Minnesota’s iron ore mines and taconite processing plants were laid off. Entire communities suffered, and the region blamed China for dumping steel into the U.S. market. Ryan credits tariffs for helping turn things around.

“We are running at 100 percent capacity at all of our mines,” he says.

Minnesota’s not just mines and farms, of course. The state has a diverse economy and is home to the headquarters of giant companies like Target, Best Buy and United Healthcare.

Bob Kudrle works just a few miles away from the fairgrounds at the University of Minnesota. He’s a professor of international trade and investment policy. He says Minnesota is not the kind of place that’s going to benefit from current trade policy, “unlike some states, Pennsylvania, Ohio, that have been terribly battered by the changing global economy.”

Minnesota, he says, is a likely net loser in a trade war.