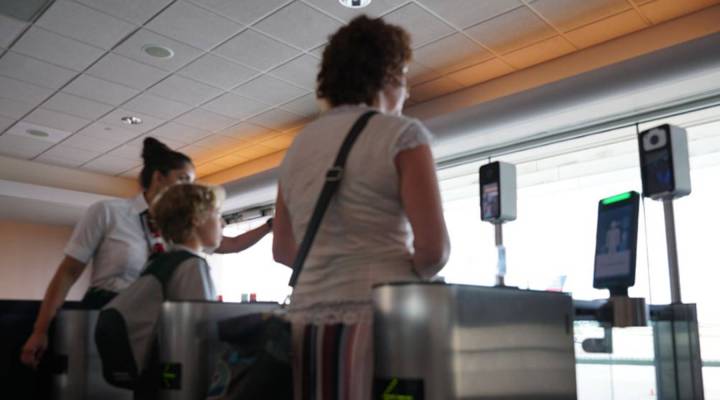 The line to board one of British Airways’ evening flights to London from Orlando International Airport was long. Nearly 250 passengers — some retirees, business people and families who had visited amusement parks — inched toward what looked like a futuristic subway turnstile, following a gate attendant’s instructions to “step on the yellow footprint and just look directly at the camera for me.”

Passenger after passenger approached a small camera that snapped a photo and, using biometrics — or measurements of facial features — matched the image against passport photo data on file with U.S. Customs and Border Protection. Once the software gave confirmation of the match, the passengers stepped through the gate and proceeded onto the plane.

“It’s much faster than having to look in the passports and documents, especially when it’s a family traveling,” said Souad Amedjahdi, who has handled boarding for British Airways for the past two years. She estimated that the facial technology cuts the boarding time from the usual 45 minutes to about 25 minutes, which she said helps the airline company.

“We get less penalized for delays,” Amedjahdi said.

Orlando International Airport is the first in the nation to commit to processing all arriving and departing international travelers with the facial recognition technology. The program, introduced by U.S. Customs and Border Protection, aims to reduce passenger wait times and tighten security measures.

Orlando International began a pilot program in January and paid $4 million to formally adopt it. It’s a partnership between private cybersecurity firm SITA and Customs and Border Protection. SITA software transmits passengers’ photos to the agency, which uses government-owned facial-scan technology to match those photos with data on file.

Newsome said the program is useful for maintaining tight security as the number of travelers’ coming through the airport grows.

“It’s hugely important to be able to handle more passengers in the same amount of space,” Newsome said.

He cited a report from the Georgetown Law Center on Privacy & Technology, which found that biometrics software does not respond well during a data breach. But the use of biometrics raises privacy and security concerns, according to Peter Swire, associate director for policy of the Georgia Tech Institute for Information Security and Privacy.

The report also referenced tests by the National Institutes of Standards and Technology, a government agency, which found that more than 35 facial recognition algorithms showed accuracy rates varied depending on the race and gender of the person being scanned. Customs and Border Protection said its facial technology has a more than 97 percent accuracy rate.

Swire said one question he has around privacy is how the government could use its facial scan technology software in the future.

“They could change the rules and start using these pictures for a much broader range of things,” he said.

Douglas Kidd, executive director of the National Association of Airline Passengers, said that if the technology is widely adopted, passengers will likely pick up the cost through taxes, airport fees or additional charges.

“The government may end up buying the technology,” he said. “But we, the passengers, pay for it.”