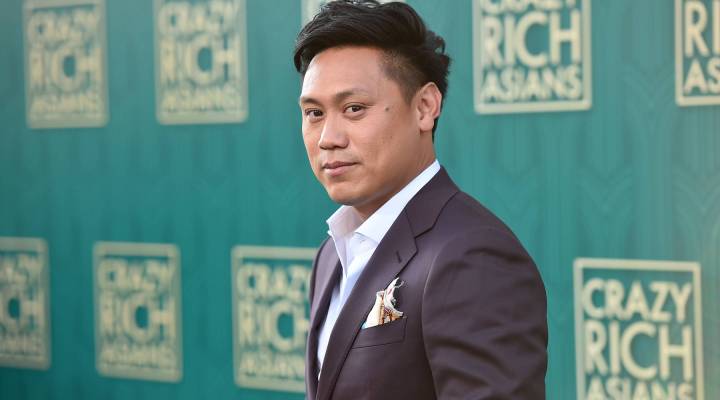 “Crazy Rich Asians” hits theaters Aug. 15 and is the first Hollywood studio film in 25 years to feature an all-Asian cast. It’s based on the book by the same by Kevin Kwan and stars Constance Wu, Awkwafina, Henry Golding and Michelle Yeoh. In anticipation of the cultural significance of this moment, director Jon M. Chu felt that it was important to release it with a studio that could put it in theaters. He turned down a big offer from Nexflix and went with Warner Bros. instead.

At a time when Hollywood is taking heat for its lack of diversity, it could be a turning point for the industry. It’s certainly a turning point for Chu, who came to the studio to talk to Marketplace host Kai Ryssdal. The following is an edited transcript of their conversation.

Kai Ryssdal: So, you read this book, give me the elevator pitch when you wanted to get it made.

Jon M. Chu: I was looking for a project that was personal to me, especially considering I never dealt with my own cultural identity of being an Asian-American. That’s the last thing I wanted to deal with or talk about, but I felt like I was getting older and I was having a baby. And so there was stuff that I wanted to figure out for myself. So my sister emailed me about the book, my mom emailed me about the book. And so I took it on and I demanded that I’d be a part of it.

Chu: It’s been a journey. This is my eighth movie in 10 years.

Chu: I am part of the system. I think that was the wake-up call. As I was reading this stuff a couple of years ago on Twitter about #Oscarssowhite and #whitewashedout, I learned. I was reading, I was listening to people, and I realized, “Yeah, they’re right.” And when I looked in the mirror, I realized, “Oh, I am Hollywood. I’m here. This is my whole life.” So I had to do something. If I was going to do anything, then I should just shut up, but at this point I had an opportunity.

Ryssdal: So here comes the put up or shut up question, because this is the first all-Asian major film coming out of Hollywood in like 25 years.

Chu: Many, many years. Yes.

Ryssdal: What’s your stress level, and what happens if this doesn’t land big?

Chu: If it doesn’t land big, the fight will keep going, we’ll keep making stuff. That’s not what’s at stake. What’s at stake, I think, is if people show up. It accelerates. It’s a message to the studios that there’s good business here, to the conglomerates that own the studios, to all other mediums…. It says that it’s worth your time and your energy to invest tens of millions of dollars to have one of these types of movies, and I think that every movie that comes out that proves the point changes the dynamics, makes the studios say less and less that there is some reason why they can’t make these movies. So this is the new cinematic universe. It is perspective and new stories.

Ryssdal: It was important, really important, for you to get this movie to the big screen versus TV. Netflix actually offered more money, right?

Chu: Yeah, and Netflix has more eyeballs, like, immediately all around the world. You want to wait for it. There’s no reviews, there’s no opening weekend to decide this.

Ryssdal: Nobody knows what the number is.

Chu: Yeah, nobody knows, it’s great. So that was a difficult decision. There was no guarantee for the Warner Bros. side, how many theaters, how much marketing dollars they put in. But we knew that movies still have meaning. Movies still impact culture more than anything in the world. We would not have this fervor or this energy if we were just another one on Netflix. And I love Netflix, don’t get me wrong. I want to work with Netflix.

Ryssdal: Oh yeah, because they’re the next deal. Right?

Chu: But for Warner Bros. to say, the most old-school studios to greenlight this movie and say, “Hey, we will bet on this, you should, too” pours into all media and all pop culture, actually.

Ryssdal: I can’t believe I’m asking this of a 38-, 39-year-old guy. But to your legacy now. After this film, you’re working on an adaptation of Lin-Manuel Miranda’s “In the Heights.”

Chu: Yeah, a musical all about immigrants as well.

Ryssdal: So the question is, is this now your mission going forward to make sure that American cinema is more representative?

Chu: I think, “What can I do that no one else can do?” I’m in this position, in a very lucky position. I was discovered, I didn’t have to do commercials and music videos to get to this point. I’ve been very blessed. Never had to raise money for an independent movie. So what, what am I doing with that? What am I actually pushing the boundaries of that in this position? And that’s, I think, my new Chapter 2, is I’m looking for projects that other people actually can’t do and I can push forward.