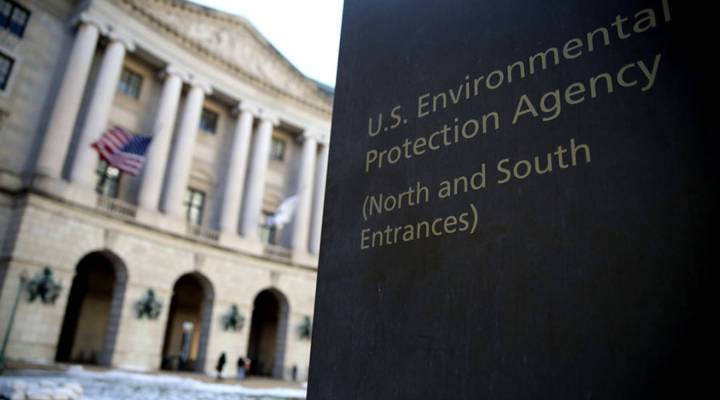 The federal government, on the verge of banning some uses of a carcinogenic industrial chemical at the close of the Obama administration, has delayed action under President Donald Trump and kept the chemical on the market.

The chemical, trichloroethylene (or TCE) has long been used for degreasing and cleaning metal parts in factories, but has been classified a “human carcinogen” by the Environmental Protection Agency since 2011. TCE has been linked to cancer in several industrial sites, including a toymaking plant in the suburbs of Portland, Oregon.

In Beaverton, Oregon, Amanda Evans-Healy remembers her father having one of the best jobs, at the View-Master plant that assembled those red, 3-D picture viewers once the rage in postwar American households. She remembers the plant fondly.

“We all gathered in the front employee parking lot” one day, Healy said. “A helicopter landed, and Mickey Mouse and Pluto and Donald Duck got out. And that was huge.”

Evans-Healy stands at the site of the plant, which from the 1950s to the 1990s was a toy fantasy land. It’s now a strip mall. Her father worked in the View-Master art department for more than two decades, before being diagnosed with liver cancer in 2001.

His disease progressed quickly. “It just was worst-case scenario. We found out in Thanksgiving 2001, and he passed away shortly after Valentine’s Day.”

Three years before his diagnosis, the factory announced its water had been laced with TCE, which for decades had been used to strip grease off metal pieces. A joint state-federal report found that workers had been dumping the used chemical on the ground, where it leaked into the company drinking water well. Soon after the discovery, the plant owner shut operations in 2000 and transferred View-Master production to Mexico.

The report, produced by the state of Oregon and the federal Agency for Toxic Substances and Disease Registry, estimated that up to a quarter of a million View-Master workers over the years may have been exposed to TCE.

The Oregon case is one of several industrial sites with suspected cancer links, including the Camp Lejeune marine base in North Carolina, and a toxic dump site in Woburn, Massachusetts that’s at the center of the book “A Civil Action.” A movie by the same name was released in 1998, starring John Travolta as a plaintiff’s attorney for alleged pollution victims.

In a new report, the nonprofit Environmental Working Group estimates that TCE contaminates the tap water supplies of 14 million Americans. EWG had previously reported the presence of TCE in more than 300 drinking water systems in 36 states.

At the Beaverton View-Master plant, just five workers and their families received settlement money from the company in 2011. That included Amanda Evans-Healy’s father. Other families either didn’t sue, or saw the statute of limitations run out.

“I feel horrible,” Evans-Healy said. “I really, really had hoped to do a lot more. I still hope someday something can be done.”

To her, one of those “somethings” is a ban on TCE use. Two years ago, the EPA proposed to ban for certain uses of the chemical, in aerosol degreasing, vapor degreasing, and spot cleaning in dry cleaning companies. This became a problem for some companies that have long depended on TCE.

“They didn’t have to think about what they were doing with the cleaning,” said Jason Marshall, a toxic chemicals expert at the University of Massachusetts Lowell who helps companies find safer alternatives to TCE. “They just dropped it in and came back it was clean.”

Many firms have invested in pricey degreasing machines that use TCE.

“When they have a large piece of equipment that cost them millions of dollars, then they’re not willing to drop that solvent if they’ve just purchased this,” Marshall said.

Chemical industry lobbying groups challenged the EPA proposal and underlying science. Any direct link between TCE and cancer is “erroneous,” the Halogenated Solvents Industry Alliance, representing TCE makers and users, wrote the EPA in regulatory comments. “We judge the epidemiologic evidence to be neither ‘convincing’ nor ‘strong.’”

“EPA is a politically motivated, regulatory agency, and not a bastion of accurate, objective science,” said Frank Schnell, a retired ATSDR toxicologist and adviser to the American Council on Science and Health, whose funders have included conservative foundations and energy, chemical and pharmaceutical corporations. “In fact, it is their job to intentionally err on the ‘safe’ side.’”

This past winter, the agency under the Trump administration took the proposed TCE bans and moved them to the EPA’s “long-term action list.”

To environmental groups like EWG, that is tantamount to “hibernation, indefinite delay, storing it in your attic,” said EWG vice president of government affairs Scott Faber. “There’s an enormously strong record that TCE is a known carcinogen. So there was really no reason for the administration to delay these bans.”

The Halogenated Solvents Industry Alliance declined to be interviewed for this story, as did a second industry group, the American Chemistry Council.

“Trichloroethylene is one of the first 10 chemicals for EPA’s review under the amended Toxic Substances Control Act. The law requires EPA’s risk evaluation to be based solely on health and environmental information, including consideration of risks to sensitive subpopulations relevant to the conditions of use evaluated. After the review is complete, EPA will determine if the conditions of use evaluated meet the law’s safety standard or require risk management that may include use restrictions, phase outs and bans.”

The EPA’s media office emailed Marketplace a statement asserting that TCE uses in the proposed bans will be folded into a longer-term evaluation: “The TCE uses that were in the proposed rule will be included in the risk evaluation that is scheduled to be completed in late 2019.  EPA has concluded that the risk evaluations for these chemicals will be more robust if the conditions of use are evaluated by applying the guidance and approaches required by the amended TSCA statute”

Meanwhile, Washington chemical law attorney Lynn Bergeson said TCE use in the real world may already be diminishing, noting that Home Depot is removing products containing the chemical from its shelves.

“They can make a decision based on their own appetite for risk,” Bergeson said of retailers choosing not to sell products containing risky substances, “and their commitment to simply not supplying products that contain chemicals that are believed to pose risk, because it’s against their corporate creed.”

Correction (July 27, 2018):  An earlier version of this story omitted a written statement from the American Chemistry Council about trichloroethylene. The statement has been added.