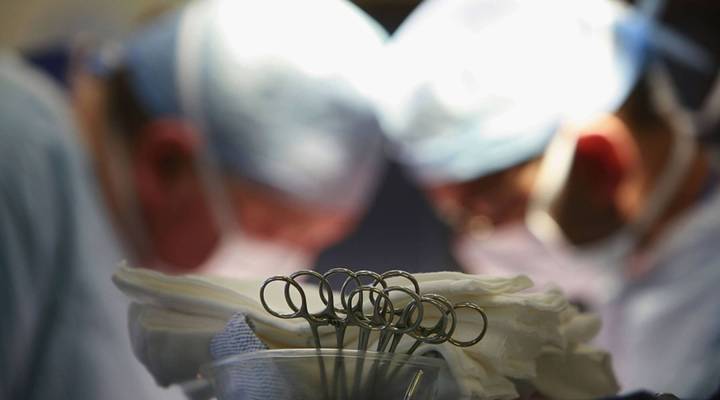 “Looked in the mirror and I was really yellow,” he said.

Johnson, who has worked in Texas hospital radiology departments for 25 years, didn’t know it then, but he had severe acute alcoholic hepatitis. Johnson met with physicians in Dallas.

“The doctor came in and he said, ‘You have to be in AA for six months before we will even consider putting you on the transplant list,’” Johnson said. “I didn’t have six months.”

About two-thirds of the estimated 30,000 people diagnosed each year with severe acute alcoholic hepatitis die within three months. Unlike people with other kinds of liver disease that are caused by drinking, these people are prone to infection, suffer from multiorgan failure and are “failing right in front of you,” said Tamar Taddei, a Yale University gastroenterologist.

Taddei said some people only learn of their diagnosis, and their grim prognosis, after seeing the doctor for the first time.

Often their best hope is a liver transplant. But for the past 30 years, before even considering surgery, U.S. transplant centers have required patients to abstain from drinking for six months. But more and more physicians are questioning this strict standard, particularly in extreme cases like Johnson’s.

“There really was never anything magic about that six-month interval,” said Mack Mitchell, a gastroenterologist at the University of Texas Southwestern Medical Center.

In 2011, French researchers published an influential paper in the New England Journal of Medicine that found patients who abstain for six months before a transplant are just as likely to return to drinking as those who don’t wait — about 25 percent. Follow-up research in the United States has reaffirmed the finding.

“We’ve come to the conclusion the most important thing is that careful evaluation and selection process,” Mitchell said.

A recent survey of U.S. transplant centers estimates about one in four now will forgo the six-month abstinence period and instead consider different factors, including the status of a patient’s mental health and support from family and friends.

Eight thousand people receive liver transplants a year for a variety of conditions, with 15,000 people on the wait list.

Given the scarcity of healthy livers, doctors do their best to predict who is at lowest risk to go back to the bottle. And while some facilities are reconsidering their abstinence policy, many are sticking with the long-standing practice.

“Many centers are still debating the pros and cons and all of the ethical considerations, because it’s a major shift,” said Yale’s Taddei.

For every person who receives a transplant, there’s someone who won’t. Donna Cryer, who runs the patient advocacy group Global Liver Institute, welcomes the evolving standard. But the hard math of the situation makes her think there’s resentment, too.

“People die on the transplant list every day,” she said. “There’s so many children, teenagers who arrive there having never touched a drop of alcohol. It can seem unfair.”

The American Association for the Study of Liver Diseases, which helps set transplant guidelines, wants more research before it is ready to endorse any new policies.

But Dr. Ray Chung, a member of the association’s governing board, said the emerging research “has given all of us not only pause, but made us rethink that historical rule.”

That reassessment may be why Jeff Johnson is alive today. After doctors in one Dallas hospital said he’d have to wait six months, Johnson crossed town to UT Southwestern.

Johnson and his 18 family members who joined him at the hospital convinced the staff he was a good gamble.

“I had everything to live for,” Johnson said. “I had a strong family.”

He got the liver.

Johnson has begun to speak out on the issue, trying to encourage others like him.

“There are a lot of people that are dying out there that don’t have to,” he said.