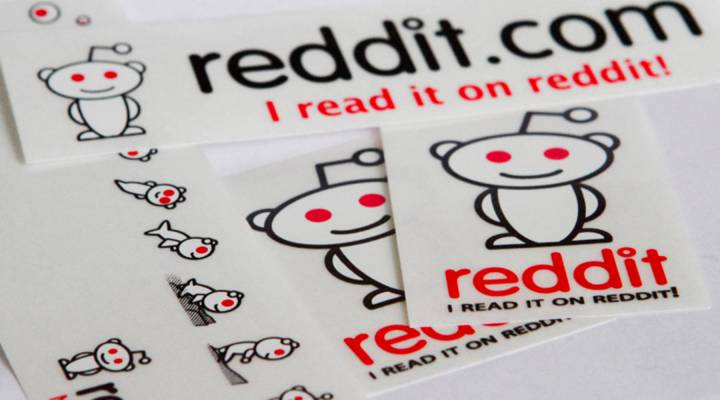 Reddit is the fourth-most visited site in the United States. It’s been dubbed “the front page of the internet” and popular for Ask Me Anything interviews with public figures and celebrities. In recent years, it’s also infamously fostered hate speech and harmful communities of trolls. Steve Huffman founded Reddit in 2005 after graduating from the University of Virginia. He then sold the company, but returned in 2015 at the peak of vitriol on the platform.

Marketplace Morning Report’s David Brancaccio sat down with Huffman in Aspen to discuss the platform’s multiple uses, free speech and role the company has in regulating the content posted. The following is an edited transcript of their conversation.

Steve Huffman: So Reddit is a network of communities. We have communities that cover pretty much any topic imaginable. Stuff you would recognize, you know, news, sports, politics, internet culture, memes, you know, what’s going on and things you might not find elsewhere online. And we also have a pretty deep network and support community, so places you might go when you’re having difficult times in life — whether you’re going through a divorce or maybe struggling with addiction. Reddit, globally, is a place where you can find community and belonging.

Brancaccio: It is actually how some of my own offspring get their news. They get it from Reddit. You know, “I saw on Reddit,” and it’s actual news — a link to a news story, and there it is.

Huffman: Quite a bit of people get their news from Reddit.

Brancaccio: All right, but there’s a lot of speech because of all these topics, and some of it is stuff that none of us wants to see. Sometimes it’s racist. You have a sense that people should say pretty much what they want on Reddit, just they can’t do anything. It’s the behavior that you’re focused on.

Huffman: Exactly. So Reddit is a very broad place and we see pretty much — we think of ourselves in many respects as a reflection of humanity. But just like in humanity, there is a darker side in this, people who say things that might be offensive or fringe. And the way we think about that is trying to draw a line between behavior and beliefs. We are not the thought police. We don’t want to control what you believe, but we do care about how you behave. So for example: Our content policies prohibit spam inciting violence, harassing and bullying. Those things are, I think, objective behaviors that we don’t want to see on the site.

Brancaccio: But I know you wrestle with this because, you know, what incites violence? In other words, it doesn’t have to just be “I want you to go knock someone on the head with this stick.” There can be words that are so inflaming that the next possible step is violence. So how do you wrestle with that?

Huffman: Well, it’s a really fair point. Sometimes it’s clean and black and white, but more often than not when we’re wrestling with it, it’s because it’s in the gray area. And so we have a whole team dedicated to this. So me, our general counsel, our head of policy, our head of trust and safety — we debate these issues quite a bit. And, of course, our communities have a say on this as well, right? So every community is run by moderators, which are users who create the community and set the standards for discourse, but also the users themselves can vote on, whether it’s a post or a comment on Reddit, vote on anything. And so they also enforce their own standards. And most communities actually have rules and restrictions far stricter than the ones that we impose. And we think that’s a good thing.

Brancaccio: And when it comes to figuring out whether a statement of fact that might be on Reddit is true or not or if it’s made up, your system of the people who use Reddit can kind of vote it up, helps you sort fact from fiction.

Huffman: The question of truth is something, a topic of conversation nationwide right now, and it’s a very pertinent conversation. And we believe that no one individual, whether it’s a private company like us or even me as an individual or the government, should be the arbiters of truth. It’s actually, I think, a very complex problem, and it comes down to people being skeptical and debating and having these conversations. You know, journalists digging things up and fact-checking and presenting their views and as well as us, you know, a technology company, really ensuring that the volume of any particular viewpoint is in proportion to the number of people who actually have that viewpoint — ensuring the integrity of our systems and our content is really important to us.

Brancaccio: I don’t think it’s ironic. You are a sentient human being. But there is some irony in the fact that there have been limits to what even you can take. You went to University of Virginia, right? So Charlottesville happens. And there’s some stuff on Reddit that you just did not want to see.

Huffman: Charlottesville was a pretty emotional experience for me personally. That is where I grew up, that’s my home. And I didn’t like seeing that happen in the real world.

Brancaccio: And your initial reaction was what?

Huffman: I was upset. There was a lot of emotions there. I was quite angry. There was a community on Reddit at the time that was almost an apologist for what happened there, and that was deeply upsetting. And my knee-jerk reaction was just get them off the site. I know the answer here. You know, we can we can figure it out later. Fortunately, I’m not the sole decision-maker in these conversations. And I think we had a productive and rational decision about it and that —

Brancaccio: There was a cooling off period for you, Steve?

Huffman: Well, for me, personally. Fortunately, the team was already on it, and we had actually, before the Charlottesville tragedy, had been refining our language around violence and glorifying violence. In the wake of Charlottesville, that was a really good motivation to get that wrapped up pretty quick. And I’m glad we did that.

Brancaccio: Maybe robots can fix this. I know you actually have humans on the case trying to figure out what goes too far on Reddit, but maybe artificial intelligence can come in here and do some of your work for you.

Brancaccio: Even a technology guy like you says maybe.

Huffman: I think AI and machine learning can — we are going to do incredible things, and I think the future is very, very bright. And I am neither with the cohort of people that think AI is the end of humanity, nor am I in the cohort of people that believe AI is world peace. AI is a computer science tool for right now, building better models and they are becoming increasingly complex so we can do some incredible things. But a motto we’ve always had at Reddit is “let humans do the hard part” and so when we’re talking about things like classification and setting standards for discourse and policy enforcement, I’m actually a huge proponent of how do we share that burden with our community? Because the only thing that scales with users, is users. And I think we’ve got a long way to go. When my spellcheck, when autocorrect gets a little better on my phone, then we can start talking about, you know, AI is the solution to all of our problems. I hope we get there, but —

Brancaccio: And spellcheck isn’t that good is your point, yes.

Huffman: But until then, I think we have to own some of this as well.

Brancaccio: Now I have, in the past, done Ask Me Anythings, AMA’s, on Reddit and it’s really me, David, doing it live. Can you assure me when I’m watching an AMA by a celeb it’s not some surrogate or an AI?

Huffman: Not always, actually. In fact, we do our best, but when it’s not the case, the community sniffs it out, and it’s usually a train wreck. Now it’s one of those delightful train wrecks that I, as a user, really enjoy watching because I think it keeps people honest. But that’s really important, I think, being yourself. And I think woe be the person that mistakes Reddit for some other easily manipulated social media platform.

Brancaccio: Now Steve, you said aloud before that you, yourself, have certain troll or troll-y or troll-ish tendencies. What did you mean by that?

Huffman: I think troll has become an overloaded word, certainly in the context of the last election. But I think the internet culture that I grew up in, it’s a form of pranksterism, of being deliberately obstinate, seeing if you can get somebody to be goofy or lose their temper or somehow do something silly. But the word also, I think, unfortunately, has new meaning in our —

Brancaccio: — Troll can be certainly corrosive. It can lead to terrible things because it’s akin to bullying.

Brancaccio: So you as a “troll” — I’m doing air quotes — you like to provoke trouble, just not corrosive trouble?

Huffman: I think there’s difference from — a lifelong hobby of mine is when somebody is like, “Hey, have you ever heard the song?” and I say, “Uh, no, could you sing it for me?” All right, and if I can get somebody to sing in a public place, that I think, that is amusing. But that’s very different from fake news.