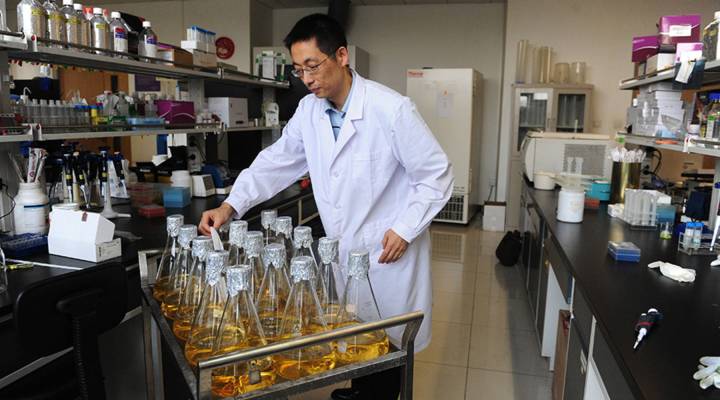 COPY
In a picture taken in 2010 Professor Shi Yigong, who walked away from a top research position in the United States to become the dean of the School of Life Sciences at Beijing's prestigious Tsinghua University in 2008, places a note among bottles of bacterial culture in a university lab in Beijing. FREDERIC J. BROWN/AFP/Getty Images

In a picture taken in 2010 Professor Shi Yigong, who walked away from a top research position in the United States to become the dean of the School of Life Sciences at Beijing's prestigious Tsinghua University in 2008, places a note among bottles of bacterial culture in a university lab in Beijing. FREDERIC J. BROWN/AFP/Getty Images
Listen Now

If you stroll around the campuses of China’s top universities and research facilities, you may well bump into someone like Chuck David. He’s an assistant professor at Tsinghua University School of Medicine. David is an American. He studied at Duke in North Carolina and Columbia and Sloan Kettering in New York.

And he’s not the only foreigner at his school or even his department.

“In biology, we have a British guy, someone from Spain, an Italian woman who ran a lab at Yale for a while,” David said. Thousands of academics in past years, he said, have been setting up shop at top Chinese universities and research centers.

This is part of a broader policy by the Chinese government.

“There is a strong interest in recruiting faculty from abroad,” said Michael Powers, a professor of finance at Tsinghua University’s School of Economics and Management. He was at Temple University’s Fox School of Business for 20 years before that. He said he was offered a competitive package to move and said China’s top institutions, the government and private foundations are willing to spend what it takes.

David said there was something else that drew him: funding for research and graduate students to help him with his research. At his current position at Tsinghua, he said, he barely has to write grant proposals at all.

Chinese talent recruitment is not a threat to the United States for now. The U.S. still takes in more talent from China than it exports to China. Some 85 percent of Chinese nationals who pursue a doctorate in the United States, for example, are still here 10 years later (though the Trump administration may shorten visas for Chinese students in certain science fields).

Even so, some observers say the United States should take notice of Chinese efforts to draw in talent. One of them is Xiao-Fan Wang, professor of cancer biology at Duke. He also advises the Chinese government on how to make China more hospitable to foreign talent.

“I also worry about our country’s policy right now,” he said.

National Institutes of Health funding for biomedical research hasn’t increased enough during the 36 years he’s been in the United States, Wang said. And it’s difficult for researchers just starting out to get funded. The U.S. National Science Board reported in February that China will probably pass the United States in research and development investments by the end of this year.

“The U.S. still has the best in the world in terms of infrastructure, culture, all the things, but we’re not using that,” Wang said. “The key is we’re not putting money where we should.”

And that speaks to the real reason China is putting energy into recruiting and retaining talent. It’s not simply about the educational system or research for research’s sake, it’s to develop China’s economy — specifically, to promote innovation.

“They need to change the economy, so it’s not just made in China, but created in China,” Wang said. “They realize that to compete in the national stage, the key is talent.”

Research and innovation are drivers of growth. And for that you need the best researchers and innovators you can get.

Correction (June 6, 2018): This post has been updated to reflect that Michael Powers spent 20 years at Temple University’s Fox School of Business.