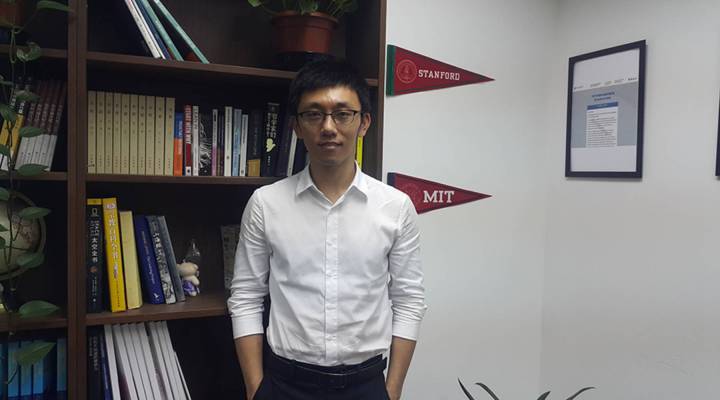 Dong Huaihao has a chemical engineering degree from Tianjin University, which is near the capital of Beijing and is ranked among the top 40 colleges in China.

His achievement is no small feat. He hails from the central province of Henan, which is almost as big as the state of Washington and has as many people as California, Texas, Florida and New York states combined.

Competition for entrance into the university is fierce, because Chinese colleges limit the number of students they take from each province. In 2014, Tianjin University accepted only three out of every 10,000 students who took the national entrance exam in Henan province. Dong was one of them.

Now he wants to take on an even bigger challenge – to get a graduate degree from a U.S. institution of higher learning.

“American universities are better than China’s. They usually have a long history, their libraries are big, and their learning facilities are more sophisticated. Americans are good at critical thinking, which is very different from our culture,” Dong said.

However, the current trade tensions between the U.S. and China may derail the plans of students like Dong.

In an effort to prevent intellectual property theft, American embassies and consulates have been given additional screening instructions for interviewing Chinese citizens who study sensitive fields such as robotics, aviation or high-tech manufacturing, according to Senate testimony by Edward Ramotowski, the State Department’s deputy assistant secretary for visa services, this past June.

The announcement of tighter screening procedures has not deterred Dong, who has been preparing to study in the U.S. for the past three years. He has taken test preparation courses and hired an agency to help him navigate the American admissions process. To help in the effort, Dong Huaihao’s parents spent more than 50,000 yuan ($7,500), which in Henan province is the average wage for an entire year.

Their investment paid off. Dong has been accepted into the University of Southern California to pursue a master’s degree in chemical engineering in the fall.

However, the university offer will not guarantee that he can study in the U.S. America’s visa process is among the most stringent in the world for Chinese nationals. It includes a face-to-face interview at a U.S. embassy and consulate.

Dong said he had to present his study plan, his graduate adviser’s resume and proof of his parent’s income and assets to American officials.

“I had to prepare a lot of documents, but the officials at the U.S. embassy barely looked at them. They asked me a couple of questions, and then said I have to undergo an additional checking process,” Dong said.

He said he heard of classmates who are in the same position.

Back in early June, Ramotowski confirmed at the Senate subcommittee hearing, that Chinese citizens in sensitive fields may be limited to a one-year visa.

Professor Zhao Huajun from Zhejiang Chinese Medical University said the restriction is not fair to students.

“When Chinese students study abroad, they learn foreign technologies through recognized academic programs and exchanges. They are not there to steal or hurt America’s national interests,” he said.

In 2013, U.S. authorities charged Zhao with economic espionage when he was working as a researcher at the Medical College of Wisconsin. The charge was later dropped when he pleaded guilty to a lesser charge of illegally downloading data, which Zhao maintains was done to safeguard the research.

“I am a scientific researcher by training. I wouldn’t do things that violate the principles in the field of science,” Zhao told Marketplace.

News of visa rules tightening has not affected business for Focus International, an education consultancy group that has offices across China. The firm specializes in preparing students to study into foreign schools.

According to Focus International’s general manager, William Yan, the U.S. has been tightening visa rules for the past five years. Despite that, he sees a growing appetite among Chinese families for an American education. His clients are not just sending their children to U.S. colleges. Some 40 percent of families are also applying to private U.S. junior high and high schools.

“One of the reasons parents send their kids to study in the U.S. earlier, is because they hope that this will give their child an edge with American colleges later,” Yan said.

He said his firm charges between 100,000 yuan ($15,000) to 300,000 yuan ($45,000) to advise students on which schools they have a good chance at getting into based on their academic performance. He insists that the company sticks to an advisory role, unlike some agencies in China that have been accused of drafting admissions essays and forging documents for students.

Another reason parents are sending their children to American primary and secondary schools, is to bypass China’s grueling national college entrance exam, or gaokao. Preparation for the exam begins three years in advance.

Yan, now 30, still remembers studying from 6 a.m. to midnight to prepare for his exam more than a decade ago. He said it was the same for most people at his high school, one of the top ones in northern Shanxi province.

He said that the situation in China has improved since he has graduated from high school, and it’s now easier to get into China’s top universities.

However, Yan said, there is a growing appetite for foreign universities because more public high schools in China now have international divisions, which teach students the curriculum in English and incorporate aspects of the American education system.

“This prepares the students to study abroad eventually,” he said.

Nearly a third of the 1 million foreign students studying in U.S. colleges come from China.

“In 2016, Chinese students studying at U.S. universities and colleges contributed $12.55 billion to the economy, effectively subsidizing the costs for domestic students in some cases,” according to a commercial guide on trade with China, run by the U.S. Department of Commerce.

U.S. degrees are lucrative because they are prestigious when seeking a job in China.

Teng Feixue who received her visa to study a master’s degree in chemical engineering at Columbia University within a week, but said she’s heard of classmates who had to undergo additional checks at the U.S. embassies in China.

“There are too many Chinese students with graduate degrees from top universities in China, so I want a degree from a famous American college so I can stand out in the job market,” said 22-year-old college student Teng Feixue.

Recently, she received a five-year visa to study for a graduate degree in chemical engineering at Columbia University.

She estimates that she will be spending $79,000 each year for tuition and living expenses, which is a considerable amount of money even for her parents, who are both chemical engineers in China. Teng said in order to save for her tuition, her mother had found ways to pare expenses for the last few years.

“The cost is high but (Columbia) University is a good school and I can make new friends and broaden my horizon. This is all very attractive to me so I believe the cost is worth it,” Teng said.

Meanwhile, Dong Huaihao has heard from the U.S. embassy in Beijing that he got a study visa, but only for one year.

He will have to go through the visa application process again for his second year in order to finish his graduate degree at USC.