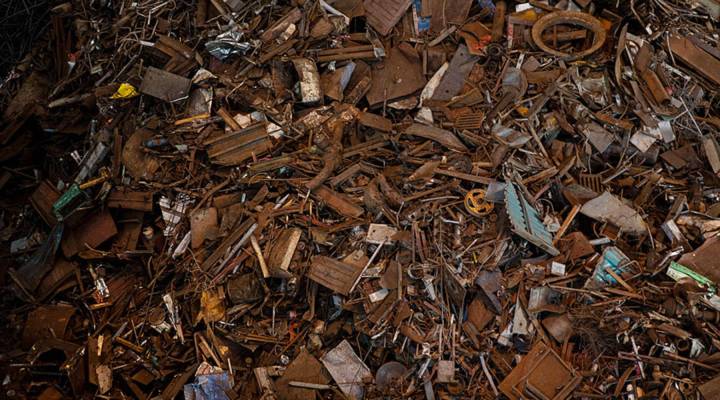 COPY
Scrap metal to be used in steel production is piled at the Zhong Tian (Zenith) Steel Group Corp. in 2016 in Changzhou, Jiangsu. Kevin Frayer/Getty Images

Over the weekend, Treasury Secretary Steven Mnuchin said the prospect of a U.S.-China trade war was “on hold” for now. There’s been a lot of trade headlines lately, but one slice of the Sino-American trading relationship that hasn’t gotten a lot of attention is the multibillion-dollar U.S.-China scrap trade. Earlier this month, the Chinese government suspended the North American branch of the China Certification and Inspection Group North America, which inspects all the shredded steel, corrugated cardboard, beverage containers and other scrap that the U.S. exports to China, from approving U.S. scrap for import. That’s a big problem for Randy Goodman, an executive vice president at Greenland America Inc., which buys and sells scrap metal. Marketplace host Kai Ryssdal talked with Goodman about what the suspension means for scrap brokers like him. The following is an edited transcript of their conversation.

Kai Ryssdal: So when you got this news about China putting a moratorium, I guess, on scrap imports, what was your logistical position?

Randy Goodman: Well, to begin with, we probably had over 100 containers on the water moving towards China. About 60 or 70 of them are actually impacted.

Ryssdal: Give me a dollar amount.

Ryssdal: What happens if this does not get worked out and the Chinese instead of lifting the moratorium on the fourth of June, as they are supposed to do, say, you know, “We’re going to keep on going for a long while.”

Goodman: Well, at that point, decisions are going to have to be made. We have, there’s basically stuff stuck in a couple different patterns. We’re going to have to potentially relocate some or all of those containers to other countries, other buyers who do not necessarily have the same supply and demand as China. So you’re looking at a marketplace that’s already full and then at lower prices.

Ryssdal: Well, right. That’s kind of the point. China is the biggest importer of our scrap, and whoever is not going to be able to take as much of it as you and we, I guess, have been accustomed to.

Goodman: Definitely not. And even if you combine all the world’s capacity for a lot of different items, they still can’t take the enormous amount of scrap that China was taking and utilizing.

Ryssdal: So, what are you going to do?

Goodman: Well, juggle. It’s a lot of juggling to figure out where you’re going to go with the scrap, and then the whole marketplace has some adjusting to do as to what the real value of those scrap items are because the value’s changing because a different economy is taking it into their mix and now has to evaluate at what price levels they want to buy that material at.

Ryssdal: Do me a favor and complete the circle, if you would. This scrap goes to China, they turn it into products that at least in part wind up coming back here that American consumers want to buy at not really high prices. If this scrap doesn’t wind up in that supply chain, what happens to American consumers and the stuff they want to buy?

Goodman: I think the obvious answer is they get more expensive. That will happen. It already has happened, in some cases almost immediately, because certain items were not available for the manufacturers here in the United States to buy the normal material that they would normally buy as parts, whether it be part of their manufacturing process or pieces of their equipment.

Ryssdal: Given the news of the weekend that there is apparently some kind of detente here with the U.S. and Chinese about global trade, are you confident that on the fourth of June the Chinese will say, “Come on in”?

Goodman: No. I’m not confident at all, because this issue with CCIC North America is not just specifically related to the scrap metal recycling industry, but a large part of it is centered around the scrap industry, and yet that never really made a lot of the major media. So I’m not sure where that is on the spectrum of who’s paying attention to that right now.

Ryssdal: And now you’re on the major media, Randy. I’m just going to point that out there.

Goodman: Of course I am, and that — but you know what, but we’re almost a month into this now.

Goodman: And the question is, who’s jumping up and down for us as an industry to say, “Hey, wait a second, yes they’re generating scrap, and scrap is a manufacturing part. It’s pieces and stuff that’s going back into the recycling chain to become raw materials.”