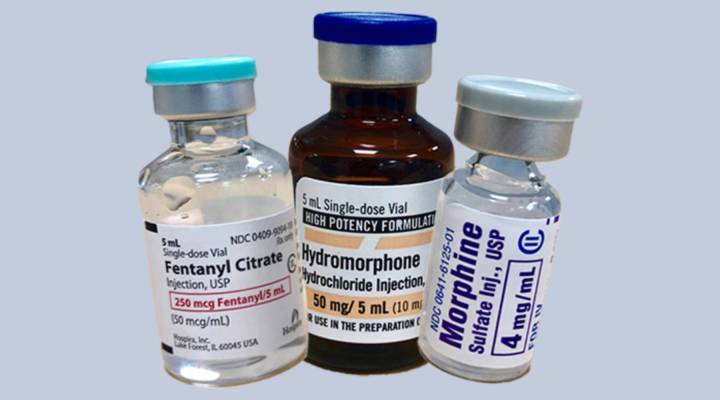 Every weekday afternoon, about 30 members of the Opioid Shortage Working Group at Mass General Hospital crowd into a nondescript conference room. They come from every department — from the hospital’s head office, to nursing, to surgery, to anesthesiology — and every day they’re ready to hear bad news. But, at a recent meeting, pharmacy director John Marshall also had a little good news to share.

“Our purchasing team, they were able to order both morphine and some fentanyl, and I’ll have those exact numbers as they’re able to get them today,” Marshall said, noting that they would still run out of hydromorphone infusions that night.

But, Marshall added that the overall outlook continues to be very bleak. It may be a year before injectable opioid supplies get back to normal.

Drug shortages are nothing new in U.S. hospitals. The American Society of Health System Pharmacists, or ASHP, has been monitoring shortages since 2000. The group’s 45,000 members routinely report that some 130 or 140 drugs, including sodium chloride  solution, dextrose  solution and amoxicillin, are in short supply at some point every year. But Joseph Hill, director of government relations for ASHP, said the shortages this year of injectable hydromorphone, fentanyl and morphine is actually kind of frightening.

“These injectable drugs are critical drugs for surgeries, for cancer care, for oncology clinics, for alleviating patient pain,” Hill said. “So, I think when you look at the potential for patients to delay surgeries or delay procedures because there aren’t injectable pain medications, [it’s] pretty severe. This is a national issue.”

This particular shortage is caused by a perfect storm of problems. For starters, only four major companies make injectable opioids because the profit margins are so slim. And last summer, the pharmaceutical giant Pfizer, which controls at least 60 percent of the market nationwide, began reducing production at a facility in Kansas that produces syringes prefilled with injectable opioids. Several months earlier, the FDA had issued a warning letter to the company after inspections raised questions about the sterility of its drugs.

In a statement, Pfizer said the problem was caused by reduced capacity due to equipment performance issues, which was further exacerbated by quality issues with third party suppliers.

Another problem hospitals and drug makers point to is the U.S. Drug Enforcement Agency’s quota system. As the nation grapples with an opioid overdose epidemic largely related to prescription pills, the DEA has limited the amount of raw materials available for companies to produce the drugs.

But DEA spokesman Rusty Payne objected to the suggestion that his agency is responsible for the current crisis. Payne said if companies wanted to end the shortage faster, they could allocate more of the approved raw material to injectables instead of pills, which are more lucrative for the drug manufacturers.

“What DEA does is we allocate quota for active ingredients,” he said. “We do not have the ability to dictate what product and in what form or what strength a manufacturer will produce. Shortages are due to manufacturing issues and business decisions, not the result of imposed quotas or actions taken by the DEA.”

In the past couple of months, the DEA has increased quotas for the two smaller companies that make injectable opioids, including West-Ward Pharmaceuticals. But Dan Motto, executive vice president of the company’s U.S. Injectables Division, said ramping up production is not as easy as flipping a switch.

“To pick up the extra demand, we have to change our production schedule and actually stop producing other products,” Motto said. “So we’re trying to be smart about that and make sure those products are not going to go in a shortage situation where our competitors can go and pick up that supply while we focus on injectable opioids.”

West-Ward, which is based in New Jersey, has shifted its production schedule, adding shifts for employees and paying overtime to help meet the needs of hospitals, he added. But Motto said the company will run out of raw materials for injectable opioids in the next two months, unless the DEA increases its quota.

“If we run out of medications to treat our critically ill patients, it will be a massive issue,” he said. “The amount of potential suffering that could occur will be significant.”

Doctors at Mass General perform more than 42,000 surgeries a year. So far the hospital hasn’t had to cancel a single one, according to Britton. But many of the problems happen after surgery. Because of the shortage, especially of the painkiller Dilaudid (hydromorphone), thousands of medical personnel are being asked to administer workarounds — drugs they don’t necessarily use every day.

“When you’re asking people to switch to new medicines, even though they may work similar or even though they may have the same effect, quite frankly it does take time for the memory dictionary to be developed,” he said. “That does present risk. And we implore everyone involved to get together and work through how we’re going to fix this.”

The problem is, at this point, the different parties still haven’t figured out a way to fix it.

This article originally ran on WGBH.

Correction (May 15, 2018): This version of the article revises Pfizer’s characterization of its response to the opioid shortage. The article has also been changed to reflect that Pfizer reduced production at its Kansas plant.