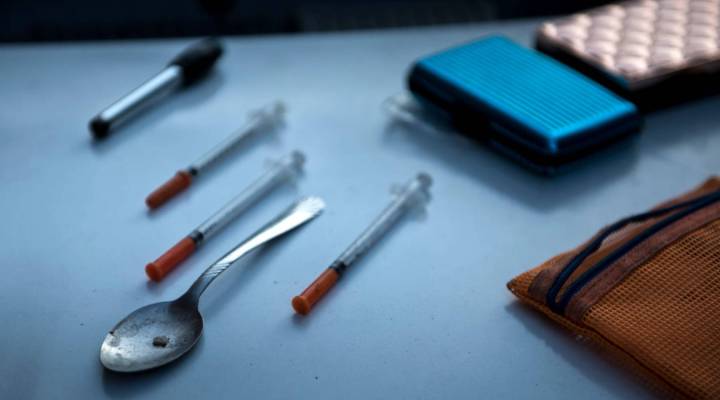 COPY
As of 2015, overdose became the number one cause of injury-related death, according to the most recent data from the Centers for Disease Control. BRENDAN SMIALOWSKI/AFP/Getty Images

As of 2015, overdose became the number one cause of injury-related death, according to the most recent data from the Centers for Disease Control. BRENDAN SMIALOWSKI/AFP/Getty Images
Listen Now

It was the spring of 2013 when David Madfes and his wife, Tania, were walking home after enjoying a late dinner in San Francisco. They were crossing the street about one block from their house when a truck making a left turn hit them.

“I fell on my shoulder, and my wife fell and hit her head on the street and suffered severe brain trauma,” Madfes said.

Tania Madfes died a week later, but it would take six months more before David would receive a death certificate listing cause of death. The reason for the delay was a deep backlog of toxicology tests, ostensibly from the rapidly increasing number of overdose cases.

During that time, Madfes was unable to receive pension benefits from his wife’s four retirement accounts.

“We were both teachers, plus I had a pension from the Navy,” he said. “With those retirement programs, we had a survivor benefit option, and they would not accept a death certificate that said ‘pending.’”

Stories like Madfes’ have become increasingly common as morgues across the country struggle to process the soaring number of overdose deaths from deadly new strains of synthetic opioids.

As a result, toxicology tests that used to take a month or two are now regularly taking half a year, tying up funerals, insurance payouts and criminal cases.

Centers for Disease Control and Prevention

The reason for the increase is the growing addiction to opioid-based painkillers, as well as increased use of deadly new synthetic opioids.

A big part of that increase, Rudd said, is directly attributable to opioids.

When overdoses are measured in nanograms

Opioids is a catch-all term for a suite of drugs including morphine, oxycodone and heroin. While heroin is generally about four times the potency of morphine, newer synthetic opioids, such as fentanyl or carfentanil, are much stronger.

These new designer drugs, cooked up by clandestine chemists, often in China, are being added to heroin to give it an extra boost.

“These are two cases in progress, and basically just little tiny packets of white and tan powder,” he said.

In front of Jones, heroin confiscated by police has tested positive for furanyl-fentanyl, an opioid synthetic 100 times more potent than heroin.

“Even a small amount, like less than a milligram, can just kill somebody straight outright,” Jones said. “When they do a bust on these drugs, it’s a full hazmat suit scenario.”

Because fatal doses occur in such smaller amounts, Jones said detecting them in toxicology tests is much more difficult, particularly as chemists keep altering the molecules to be slightly different.

As states try to work through a backlog of overdose-related autopsies, the opioid epidemic has pushed another problem to the forefront — the fact that there just aren’t enough forensic pathologists and medical examiners to keep up with demand.

Dr. Brian Peterson, the president of the National Association of Medical Examiners, said many doctors are already working at the upper limit of 250 autopsies they’re allowed per year under NAME caseload standards. And the pipeline has yet to ramp up.

“While there are maybe 500 to 600 forensic pathologists working in the country these days, we could use at least twice that many,” Peterson said.

In addition to a shortage of doctors, Peterson said the increased number of overdoses also leads to more time spent testifying in criminal cases.

“That means more time in court, and if you’re in court, you can’t be doing autopsies, so eventually its more work being extracted from the same small pool of people,” he said.

The state of Maryland recently added $400,000 to increase salaries for examiners forced into working longer hours. One county in Ohio recently borrowed an air-conditioned mass-casualty trailer to relieve the space shortage at the morgue.