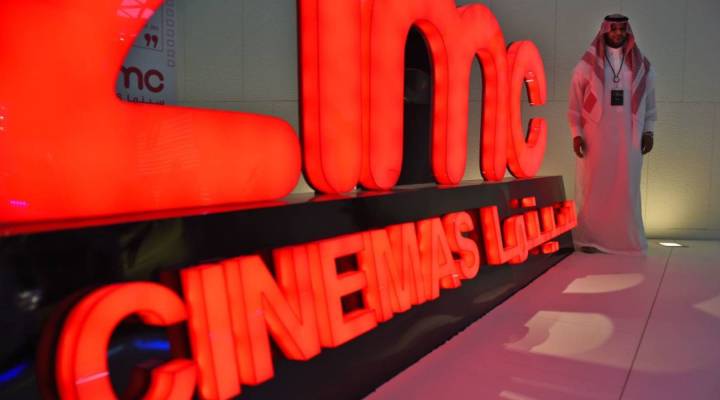 COPY
A Saudi man poses for a photograph during a cinema test screening in Riyadh, Saudi Arabia.  FAYEZ NURELDINE/AFP/Getty Images

In 2012, filmmaker Hajar al-Naim, 28, set foot in her first movie theater in Los Angeles more than 8,000 miles from her home in Saudi Arabia.

“I watched ‘Argo,’ it was … amazing. I didn’t know it would be such an experience. But I loved it because of the reaction of the people around me. The laughter, the crying, the silence in the room. It was just an incredible experience. I can’t forget that day,” she recalled in December when Saudi Arabia announced it was lifting a 35-year ban on cinemas.

Her generation had to travel hours by car or by plane to Bahrain, Qatar or Dubai just to sit together in a darkened theater to watch a film.

But today in Riyadh, as the world’s biggest theater chain, AMC, opens the country’s first cinema, 500 Saudis will enjoy an experience most of us take for granted. Al-Naim, who made the film “Detained”  about Syrian refugees, doesn’t have tickets to tonight’s grand opening and viewing of “Black Panther,” but said she is also excited.

“Finally we have a theater where we can watch movies with family and friends without leaving the country. Maybe just driving five minutes away from my home, which is great and exciting,” al-Naim said. “I’m getting a lot of calls right now asking, ‘Did you get a ticket?’ A lot of people are fighting to get tickets. I’m waiting for a miracle to happen for me to go.”

Naim and her friends shouldn’t have to wait long. AMC plans to open 40 theaters in 15 Saudi cities by 2023. London based Vue International also plans to build 30 multiplexes in the next three years. Eventually, the Saudi government hopes to have 350 cinemas nationwide, with the film industry expected to add $1 billion to the economy annually. It’s also hoped movie theaters will create an estimated 30,000 jobs, helping to diversify the kingdom’s economy away from oil.

And it’s a blockbuster opportunity for cinema companies too.

“This is the 20th largest economy in the world. It has 32 million people. They don’t have a single open movie theater in this country as we speak. This is a staggering opportunity really,” said Adam Aron, CEO of AMC Entertainment, speaking from Riyadh ahead of opening night.

“I think opening movie theaters will inspire a lot of people around the country to be filmmakers. They’ll see movies and want to join. It will be a more competitive industry and we will fund more movies,” al-Naim said. She also sees the debut of “Black Panther,” a top grossing film cast with majority black actors as a dual cultural milestone.

“This is a great message Saudi Arabia will send to the whole world. We have a rich culture; we have white, black, all types of people, we don’t have that kind of (racial) discrimination among people, so this is a great movie to screen at the beginning I think.”

To what extent movie theaters will change Saudi society is unknown. But like many other conservatives cultures that have let Hollywood in, Saudi Arabia will definitely change movies. In China, a huge market for Hollywood, filmmakers already cater to local sensibilities by avoiding conflict on the issue of Tibet. In India, every film must have a certificate from the government censor board, which can demand cuts.

Tonight’s screening of “Black Panther” in Riyadh will have cuts, though AMC’s Adam Aron would not be drawn on the details.

But who will decide what films AMC shows in Saudi Arabia?

“AMC is going to decide,” Aron said, “And we will take each one to the government and make sure that we’ve gone through the appropriate editing process for the region.”

Saudi Arabia enforces strict Islamic law. While Crown Prince Mohammed bin Salman has been loosening some restrictions: women will be allowed to drive as of June, and will not need the permission of a male family member to go to university or have surgery, other discrimination persists. Women are forbidden from being in public uncovered, cannot use public swimming pools and many buildings have separate entrances for men and women to limit the sexes mixing.

The one aspect Saudi moviegoers will share unaltered with their western counterparts is the ubiquitous crunch of warm popcorn, at the direct request of Saudi Arabia’s minister of culture and information.

“We transported popcorn poppers in from abroad and we were busy all night making regular popcorn and caramel popcorn,” Aron said. Yes there will be a lot of popcorn.”