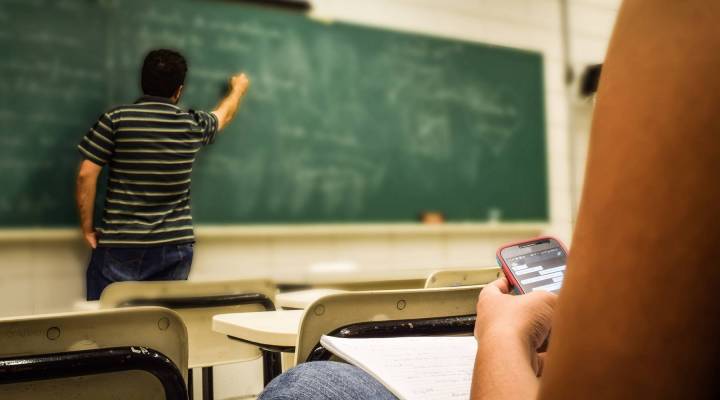 More than half of middle schools in the United States allow students to carry their phones, which filmmaker and Stanford-trained physician Delaney Ruston finds concerning.

A few years ago, she directed the documentary “Screenagers,” which looks at how parents should handle the amount of screen time their children are exposed to. Now there’s a campaign called “Away for the Day” to get middle schoolers off their cellphones, which Ruston says could help with students’ academic success and well-being.

Ruston joined us to discuss the negative consequences of our tech-obsessed world and why parents’ own reliance on cellphones may play a role in their kids’ addiction. Below is an edited transcript of the interview.

Delaney Ruston: My daughter was begging for a smartphone. And I was really concerned, as a mother and physician, what the impact would be of a cellphone in her life. And that’s what prompted me to make “Screenagers” several years ago.

David Brancaccio: Which brings us here to 2018. There is this campaign. Tell me about it … to what, make middle schools into cellphone-free zones?

Ruston: Yes, “Away for the Day” is a movement to get cellphones out of the middle schools across the country, to have them put in places like lockers. And it’s all about giving tools to parents and teachers to help them change middle schools to become “Away for the Day” schools. And this is really based on science. When we look at middle schoolers, they actually can have a negative experience, a negative impact of academics and emotional well-being when they’re allowed to have their phones all day because frankly they’re using them in the halls, at lunch and sneaking them a lot in classrooms.

Brancaccio: Yeah, they think they’re all so clever. They have it in their lap and nobody’s noticing except everybody notices they’re staring at the screen in class.

Ruston: Yes, and you know, it’s interesting because I saw this exponential rise in cellphone use in middle schools and I couldn’t find any data. And I ended up doing a national survey and found that while 82 percent of parents don’t want their kids using cellphones in middle schools, over 55 percent of middle schools are allowing students to carry their phones all day. That’s really concerning.

Brancaccio: I know, it’s not just the kids lobbying for their screens. A lot of parents have learned that’s how they’re going to keep tabs on their kids is to be sure they have a phone.

Ruston: We do hear about parents who are texting their kids a lot at school. It can be convenient, but it comes at a cost. And the good news is that parents, the majority of them, support what the science shows, that for academic success and emotional well-being, having cellphones put away for the day in middle school is really the way to go.

Brancaccio: “Away for the Day,” this campaign … how are you trying to roll it out in schools? I mean, where does the discussion begin? Is it often the PTA , or do you bring into the school board?

Ruston: “Away for the Day,” it’s interesting because to me the strongest advocacy group we have out in this country are parents who care so deeply about their kids and yet we don’t see a lot of chances for them to have their voice heard. And so we’ve created all sorts of tools on the website that allows parents to take examples of policies to the schools, to see videos about successful changes that schools are making, to have phones put away for the day. And that’s what I feel so passionate about. That getting parents out there and making changes is something that anybody can do, and that’s why we’ve created the tools at the website.

Brancaccio: Are you getting much uptake for this? I mean, you’re passionate about it, but what about the schools?

Ruston: Well, absolutely. You know, in 24 hours we got a thousand people right away pledging on the website, showing they were interested in taking the tools to their schools. And we keep hearing daily now from parents who are indeed going to their schools and engaging with the principals and the teachers. You know, I talked to one middle school principal who was struggling at her school with cellphones, and she went to a conference and she learned of other schools that were saying no, cellphones should be put away in the lockers for the day. She hadn’t even thought about that as a possibility, and their school now is thriving. She is so happy that they made the change. So, you know, this has happened so quickly in our country that schools are just kind of, you know, are being reactive, not proactive. So by having parents and teachers take the data to the schools and say, “Hey, this is a possible change,” it’s really, luckily, making a difference.

Brancaccio: And you’re focusing, at least for now, on middle schools, seventh and eighth grade? Some of those also have sixth grade.

Ruston: Yes. I mean, really the data shows that the highest rates of emotional problems related to social media are among middle school-age kids. And as I mentioned, academic success can be hindered by these phones, particularly at this age when we know developmentally impulse control is a big issue. And frankly, they are so craving social acceptance that the pull for social media as well as the desire to be on video games is incredibly high at this age group, and the ability to resist that urge, frankly, can be incredibly hard for many of them. And, you know, the interesting thing is that there are kids who are able to resist. But when they see the other middle schoolers on their phones, it can be really then distracting for them.

Brancaccio: Before we go, let me ask you something probably under the heading of leading by example. Let me tell you this story: A while back, I led a public discussion about your documentary film where I live. A bunch of concerned parents [were] there, lots of school-age kids. This striking thing happened. There were these, I think they were middle schoolers who turned that auditorium around. They argued, why should they spend less time glued to their phones if their own parents were always glued to their phones? And the parents sat there in stunned silence realizing the kids had a point. I mean, the parents are part of this problem.

Ruston: Oh absolutely. But the key thing is that we have ongoing short discussions with our kids about how all of us use devices in a responsible and balanced way, and that we’re going to have different needs for technology at different times. You know, as a physician, I always say to parents, if we just say we’re going to model better or, you know, be perfect examples. Behavior change doesn’t work that way. As a parent, if we pick something that we want to change about our device use, maybe we are using it at the table when we shouldn’t or don’t want to be, and we share that with our kids, that helps them to see we’re all in this together. It’s not us versus them. The goal is to create mindful kids about tech in their lives just as we are trying to be mindful and make the right choices as parents as well.