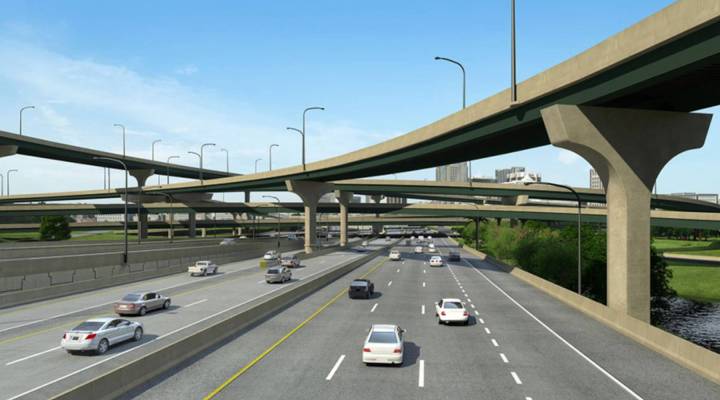 COPY
The original project to build Interstate 4 in Orlando began in 1958; its latest makeover is expected to finish in 2021. Courtesy of Florida Department of Transportation

The original project to build Interstate 4 in Orlando began in 1958; its latest makeover is expected to finish in 2021. Courtesy of Florida Department of Transportation
Listen Now

On any given day, cars zip on and off Interstate 4, the regional highway that carries an estimated 20 million commuters and tourists in and out of Orlando. For many drivers, the interstate on- and off- ramps at Lee Road, in particular, are the way into Winter Park, a bedroom community near Orlando known for historic homes and  shopping opportunities. For others, it’s the path to an easily-accessible plate of pancakes.

Less than a mile away, however, and also a short drive from the highway, the town of Eatonville sees less action. Eatonville is one of the nation’s first incorporated black municipalities, established in 1887.

“I love the cluster of Eatonville being just a small community,” said Mayor Eddie Cole, who considers the quiet town of 2,200 residents an African-American Mayberry.

At its height, Eatonville was a booming hub for black business in the segregated south. But a chunk of the town was bulldozed to make way for Interstate 4, in the 1950s, hitting the town hard. Eatonville draws thousands of visitors for the ZORA! Festival, an annual event honoring its most famous resident, the late writer Zora Neale Hurston. But the pace otherwise, is slow. That’s why news of an interstate makeover in 2011 gave town residents and officials hope.

The state and its partner, a private firm called I-4 Mobility Partners announced it would be sharing $2.3 billion in costs to renovate the interstate. As part of the project, the Florida Department of Transportation put down the funding it had—$1.7 billion—toward widening interstate lanes, redesigning interchanges, and adding new signage and express lanes with tolls. The private partner agreed to take on the rest of the costs, overseeing construction and maintenance, being paid back interest over time on its initial investment in the project.

“A public-private partnership (P3) allows FDOT to bring this project to the public now to meet current needs. An analysis was done showing if we built the project as funding became available, it would take 27 years to complete,” reads the website for the project. “By using the P3 procurement method, we are designing and constructing in less than seven years.”

President Donald Trump has talked about improving the nation’s infrastructure, using public-private partnerships to help pay for things like roads and bridges. In central Florida, authorities say the project is slated to reach completion faster as a public-private partnership. But its concrete impact on the local communities it affects and their involvement in planning is not etched in stone.

When the I-4 renovation project was announced in 2011, Mayor Cole remembered thinking that maybe Eatonville would get an interchange that could attract visitors and boost the town’s struggling economy. The state turned down the proposal, and the private firm, in this instance, is only responsible for construction and maintenance.

According to Loreen Bobo, the project’s construction manager for the Florida Department of Transportation, Eatonville is better off without an interchange.

“They would not have the property—as much property—as they do today if we put an interchange there, as well,” she said.

The private partner will, instead, place signs at nearby interchanges to direct visitors to the Eatonville historic district. Meanwhile, residents wait to see whether the upgraded interstate will bring a boost to their area.