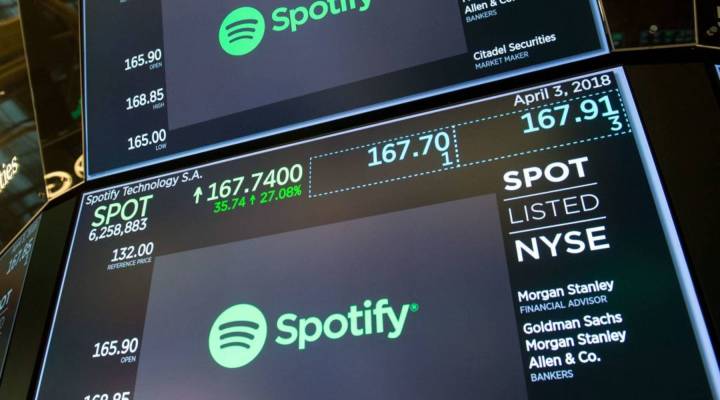 COPY
The opening numbers are displayed on the floor during the Spotify IPO at the Dow Industrial Average at the New York Stock Exchange on April 3, 2018 in New York. BRYAN R. SMITH/AFP/Getty Images

The opening numbers are displayed on the floor during the Spotify IPO at the Dow Industrial Average at the New York Stock Exchange on April 3, 2018 in New York. BRYAN R. SMITH/AFP/Getty Images
Listen Now

What do you need to know about IPOs if you think that you want to invest in the stock of a newly listed company?

Bill Mann, director of Small Cap Research at the financial services company The Motley Fool, shares the five things you need to know before you invest.

1. Don’t get swept away by the hullabaloo and pay too much for your investment.

“The excitement around an IPO is, generally speaking, going to be pretty expensive for investors. These companies have never been public before, and it really takes time for a lot of management teams to get into the pattern of how they want to talk to investors — outside investors, funds, the big institutional investors who come in. So it’s generally our advice that you wait at least six months before you buy a newly public company.”

2. Companies IPO for their benefit, not yours.

“It’s an exclusive club but it’s not an exclusive club for the buyers, it’s an exclusive club for the sellers. And so a lot of times when you have market volatility or you have the market that’s dropped a lot, you’ll hear companies saying, ‘Hey, we were thinking about going public but we’re not going to do so because market conditions are bad.’ And what they’re basically saying is that they feel like they’re going to be able to raise less money for the sellers. So, the thing to keep in mind is that an IPO is not for your benefit, it is for the company’s benefit at best, and then more usually it’s for selling shareholders.”

3. Consider the option of waiting until “locked-up” shares are available — for a better price.

“One thing that you have to know about in the mechanics of an IPO is something called a lock-up, which is this: when a company goes public they have selling shareholders, and every other share that’s held by the insiders is locked up for a period of 90 to 180 days. Ninety days after the IPO, shares that weren’t offered during the actual initial public offering go onto the market and are eligible to be sold. And what you see a lot of times is, that day plus one is a whole lot of volatility, and sometimes you get really good pricing.”

4. Make sure you read all the fine print.

“Companies will generally put out a document called an S-1, which if you are going to participate in an IPO, you absolutely, positively should read. An S-1 is a document that’s filed with the SEC that basically the company says: we intend to go public and these are the things that you need to know about how the company has performed to date, here’s what the risks are, so on and so forth. But the thing that you have to know, even with companies that provide the best level of information, is that they have not had to provide the type of information that they’re expected to as a public company to their private investors. And so the amount of information that you have on different segments within the business, levels of profitability, is somewhat limited. And to me that’s a real risk.”

5. There’s no rush. You can always get in on the action even just one year later.

“If you feel like you missed an IPO, it is almost guaranteed that you’re going to see a better price — not even down the road, way down the road — in the next year. Since 1980 there have been over 8,000 — 8,200 — IPOs in the U.S. market. Over 70 percent of these have traded at some point in the next year below their IPO price. So if you’re feeling impatient about jumping on an IPO, just recognize that in the long term you’re probably not missing out on much. And the great thing about the public markets is that they tend to be open almost every day, so once a company is public, it tends to stay public.”