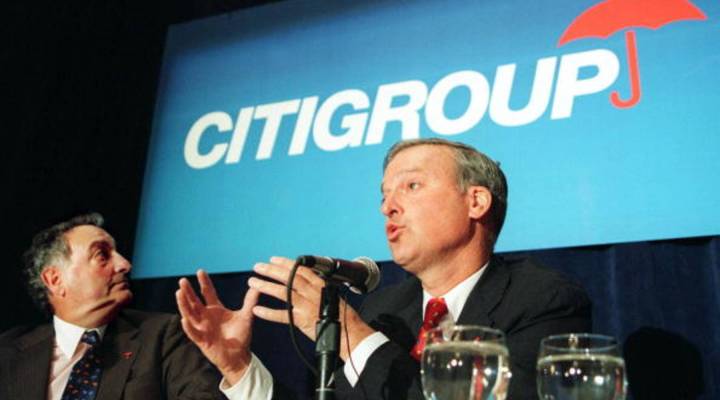 Twenty years ago this week, Citicorp — a commercial bank, and Travelers Group — a financial services company, merged to create Citigroup Inc. It became the largest bank in the world, and according to Mike Mayo, one of Wall Street’s best-known bank analysts, it also set the stage for the financial crisis that happened 10 years later.

“Citigroup typifies so many abuses in the banking industry over the last half century,” he said. He covered the merger and the events following it in his 2011 memoir. He shared a few lessons learned from the deal and its aftermath.

You didn’t even have legal authority to go through with [the deal]! This is the deal that got rid of Glass-Steagall… [it] dates back to 1933, which as you point out was passed in the aftermath of the Great Depression. And that said that traditional commercial banking, with insured deposits, needed to be kept separate from the investment banking, when you’re dealing with the securities markets. So this deal between Citigroup and at the time Travelers could only go completely through by getting rid of that law. So Congress hadn’t even passed the new law yet, and Sandy Weill, CEO of Travelers, and John Reed, CEO of Citicorp, announced the deal. Wow, that’s crazy! I mean the market value of these companies went up $30 billion on day one. The Citicorp stock went up 25 percent. But the fact that you announced a deal that couldn’t get fully consummated without Congress passing a law? That’s either courage, hubris, or just chutzpah!

In 1998, two decades ago, when this deal was announced, that was also the year that the movie “Titanic” won the Academy Award. What was the big line from the movie? “I’m king of the world!” So you felt as though the CEO, especially Sandy Weill, was king of the world. But then you see how it played out. Twenty years since the merger was announced, Citigroup’s stock is down almost 80 percent, and that’s at a time when the stock market as a whole has doubled … you know certainly the poster child for the financial crisis is Citigroup, and the amount of assistance they need from the government was staggering.

One of the lessons from Citigroup and the financial crisis is you can’t rely too much on human behavior. Because if there’s an incentive to take an action that’s going to make a lot of money in the short term but cause damage in the long term, chances are it’s going to happen. And so you need to hard-wire safety in the banking industry and the regulators have done that. So I say, bravo regulators! The regulators have taken the banking industry, sometimes you know crying and screaming, but made the foundation stronger than it’s been in a generation.

To listen to the full interview, click on the audio player above.

And for more coverage of the ten-year anniversary of the financial crisis, go to Marketplace’s Divided Decade.