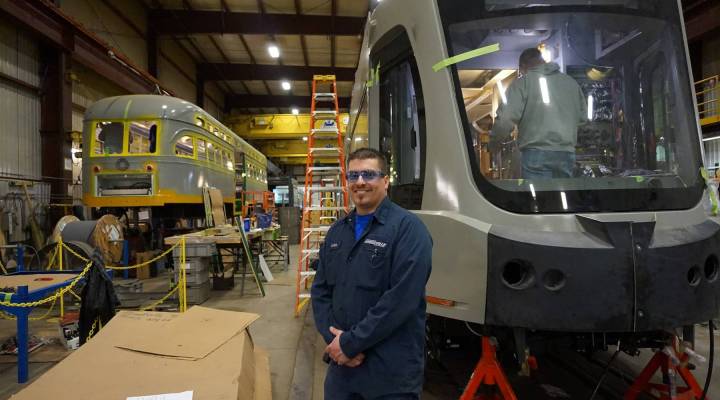 From the outside, Brookville Equipment Corporation in Western Pennsylvania looks like any other office building. But inside, the past meets the future. There are stripped down streetcars from the 1930s next to gleaming new ones. Workers assemble coal cars and locomotives. If it runs on a rail, Brookville probably makes it. And that takes steel. Tons of it. Ben Crana oversees those purchases.

“There’s been some pricing increases that have taken place in fourth quarter of 2017 and now that pricing has threatened to be perhaps even higher with the new steel tariffs,” he said.

And Brookville doesn’t use cheaper imported steel. It gets a lot of its business from cities that are given federal dollars. Dollars that need to be spent on products made in the U.S. with domestic materials — like steel. Crana says most of its manufacturing contracts are set years in advance.

Brookville can’t transfer the higher raw material costs on to their end customers, Crana explained. “Those have to be absorbed at Brookville to keep manufacturing,” he said.

Emily Blanchard, a business professor at Dartmouth University, says that will become the new normal for manufacturers.

“All firms that use steel and don’t get a break from foreign competition in what they’re making — they’ll be worse off,” she said.

Blanchard says manufacturers will be clamoring for domestic steel to avoid paying the tariff, so sellers have the upper hand now.

Joel McNeil, vice president of Business Development for Brookville, says the company, with its 300 employees, has positioned itself to weather changes.

“We’re trying to be kind of spread out across different markets to compensate for an impact that we cannot manage ourselves,” he said.

Brookville has been around for a century. It started off making locomotives, then equipment for the coal industry. As those markets tanked, it moved into streetcars. It also makes rail cars for the steel industry — so if tariffs help that industry grow, Brookville benefits, too.

Michael Moore, an economics professor at George Washington University knows all about that. During college, he worked at a steel mill in Texas. And he was on the Council of Economic Advisers in 2002 — when the Bush administration enacted steel tariffs. He’s seen this scenario before.

“You’ll help some people but you are likely to hurt a lot more in the process,” he said.

He says companies like Brookville, which will have to pay more for steel, but can’t raise prices on their products, will have to cut costs somewhere, perhaps by reducing marketing costs, reducing labor costs through less overtime or reducing investment in future technological improvements.

The markets may even out eventually — supply may meet the demand — after years.

“It will be a real stressful time in the short term,” Moore said.

The short term isn’t a big preoccupation for Chris Lasher, an electrician who has worked at Brookville for 23 years.

Lasher says he’s not too worried about the effect the tariffs will have on Brookville’s future.

“If we worried about that we would probably not be in business today because we’ve seen the ups and downs,” he said. And, he adds — they’re still here.