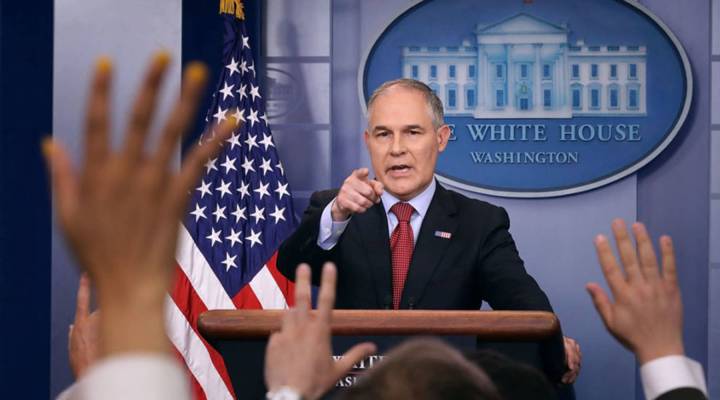 The Environmental Protection Agency has said it will soon make a big change to the way it vets science, something powerful industries have been seeking for a generation. Critics suspect a trick to undermine legitimate studies that are the basis for current regulations on air, water, toxic chemicals, pesticides and climate.

EPA Administrator Scott Pruitt in a recent interview stated that academic studies the agency relies on will have to be more transparent and show their work.

“I’m issuing a memo here pretty soon that says, ‘Look, as we do rule-making, if we use science outside the agency with a third party, the methodology and data needs to be transparent and objective for the American people to consume,’” Pruitt said in a March 22 radio interview with Oregon-based host Lars Larson.

Under the new policy, academic study authors will have to share their raw data, to be picked apart and chewed over. Washington, D.C., veteran lobbyist Jim Tozzi, who has worked in the past for chemical and tobacco interests, has pushed for this change for years.

“If you want to get into this hot game, you got to take the heat,” Tozzi said. “And if you can’t, put your laboratory coat on and stay with the rats.”

But raw data can get twisted and distorted, said retired epidemiologist Colin Soskolne. There’s an old saying in this field: Data are like captured spies. Torture them long enough, and they’ll tell you whatever you want.

“Anyone with malevolent intent can take your data and tease out of data anything that you want it to say,” Soskolne said.

It happened to him, he said. In the 1970s, Soskolne found a link between oil refinery workers and throat cancer. The refinery belonged to Exxon.

“The corporation employed the services of a private consulting firm of epidemiologists and at the time paid them handsomely, as I understand it, to, so to speak, kill the finding,” Soskolne alleged.

In the end, Soskolne had his study peer reviewed and published. But to critics of the current EPA, what’s really going on here is that the regulators don’t want to regulate.

Epidemiologist David Michaels at George Washington University is a former worker safety regulator. His book on industry influence on science is called “Doubt Is Their Product.”

“This is an attempt to handcuff the EPA,” Michaels said, “and to stop them from using new science to protect the public. People will die. Exposure to pollution kills thousands of people a year.”

He dates this tactic to tobacco industry strategy memos that were made public in the 1990s.

The EPA’s new rules on science could be used to undercut several rules, including one regulating a pollutant known as “particulate matter 2.5,” which is linked to heart disease and asthma.

“The benefits of the Clean Air Act depend on the notion that PM 2.5 kills people,” said former coal executive Steve Milloy, who served on the transition team for the current EPA. “Now I personally think the science is lousy.”

Milloy attended a recent meeting with EPA head Pruitt and said many more science changes are coming to the agency.