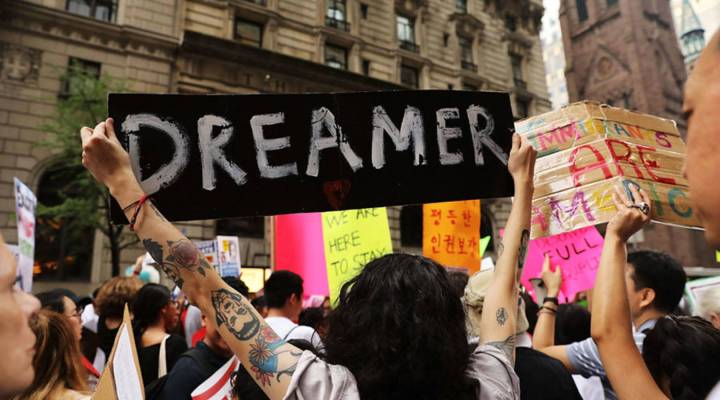 COPY
Dozens of immigration advocates and supporters attend a rally outside of Trump Tower along Fifth Avenue in August in New York City. Spencer Platt/Getty Images

But he wasn’t happy with what was left out of the bill, and neither were hundreds of thousands of people protected — for now, anyway — under DACA, the Deferred Action for Childhood Arrivals program. They were hoping for a permanent solution that would allow them to stay in the country.

Since Trump ordered an end to the DACA program last September, lawmakers have tried and failed to strike a deal to save the program, which protects immigrants brought into the country illegally as children.

While federal judges have stepped in and temporarily blocked Trump’s decision, a permanent legislative solution does not seem likely anytime soon, leaving hundreds of thousands of DACA recipients in a continued state of limbo.

For Carlos Rodriguez, a DACA recipient and a freshman at Yale University, the initial winding down of the program last September was painful.

“That was heartbreaking because it was like the one thing we had,” Rodriguez said. “Even though we knew it wasn’t enough, it was still something.”

Just hours after the announcement, Rodriguez joined hundreds of his classmates in a campus protest. Rodriguez had his pick of top colleges. He said he chose Yale because “the students seemed happy there,” the food was good and he felt like he’d be safe. The university’s president has been outspoken about how the school will protect DACA recipients.

But with no real legislative fix for DACA in sight, Rodriguez said he and his older brother, also a Yale student, feel anxious about the future.

“If we have a Yale degree, that’s great,” Rodriguez said. “But if I’m not given the legal right to work, then what is a Yale degree going to do? No one is going to want to employ me.”

The possibility of not being able to work legally in the United States has rattled a lot of DACA recipients, especially younger ones.

Jackie, a soft-spoken 20-year-old who didn’t want her last name used, said she has ambitions of becoming a nurse, but doesn’t know if she’ll ultimately get there now that DACA has been thrown into doubt.

“Even though it’s just a piece of paper, or something you carry around, it’s something that helps you work — being somebody here,” said Jackie, who was brought to Southern California from El Salvador as a child.

A couple months ago, she says she got a letter from Immigration and Customs Enforcement, or ICE, calling her status here into question. She immediately saw a lawyer.

Jackie said she asked her lawyer to go with her to the appointment.

When she showed up for her appointment, Jackie said a deportation officer told her she could be sent back to El Salvador.

“The moment was just so surreal,” she said. “I was like, ‘But why are you guys taking me if I have DACA?’ And he was like ‘No, your DACA has been expired.’ And I was like, ‘My DACA is not expired. My DACA is still running.’”

She was right. But her situation is complicated because of her mom’s status, and Jackie will have to check in with ICE again in a few months.

“I feel like it [DACA] should protect me — that’s what I thought,” she says.

Lately, she said, it’s been hard to sleep not knowing what could happen. But, she said, sadly, that fear of being torn apart has brought her family closer together. These days, they’re sitting around the dinner table more often — just in case.