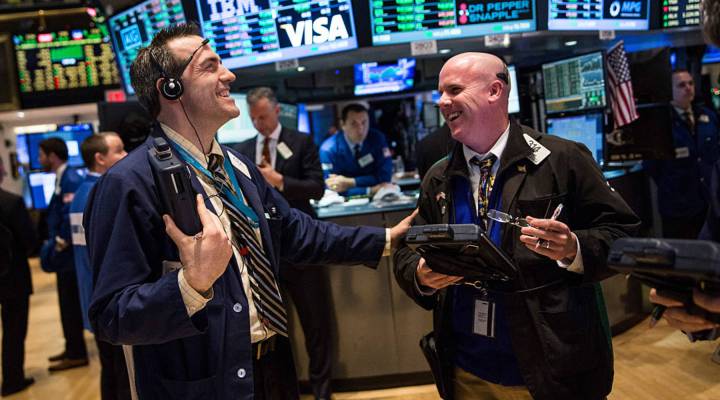 COPY
Having a coworker to share jokes with can go a long way towards making you happier at work.  Andrew Burton/Getty Images

Having a coworker to share jokes with can go a long way towards making you happier at work.  Andrew Burton/Getty Images
Listen Now

In their quest for more engaged workers, companies spent years innovating the way we work. They have tried office improvements like standing desks and open-plan offices, free lunch once a week or bagel Fridays. Some companies even bring in puppies. And while those things might work for some people, what really seems to make people care about their job is having a friend at work — specifically, one who is a work spouse.

A work spouse is a platonic friend, who the employee made at work and who they feel they can trust, respect and rely on. The term has grown in popularity in the last decade. Last year, 70 percent of workers said they had a work spouse, up from 65 percent in 2010 and 32 percent in 2006, according to a survey from research and analysis company Office Pulse. Two-thirds of those who have a work spouse said that that relationship contributes to their happiness at the office. Other surveys have revealed similar results. For example, when asked by Gallup whether they were engaged at work, 63 percent of women who have a best friend at work said yes compared to just 29 percent of women without a best friend.

For Brandi Jordan and Hannah Halliwell, co-founders of the The Baby Playgroup in Los Angeles, being each other’s work wife means they are more than each other’s colleague. It’s also made their work easier and more enjoyable.

“We also support each other in every realm of our lives,” added Halliwell. “We have in common that we’re both workaholics. We love what we do. So we do that all the time. But beyond that, we both have families. We both have the same dream that everyone has, which is this work-life balance situation and in working together we’re able to support each other in finding that.”

Many people think of work spouses as a straight man and a straight woman or a woman and woman, like the relationships that Halliwell and Jordan share. However, when Karla Bergen and Chad McBride, two communications professors who have researched interpersonal communications, interviewed 269 people about their workplace relationships, they found that these deep workplace friendships came in different forms. Some friendships were between a gay man and a straight woman, others between two straight men.

“This isn’t about a sexual tension relationship,” McBride explained in an interview with CNBC. “This is about maximizing productivity at work. It’s about making work better. It’s about having a good relationship with someone valuable that you trust.”

That means being able to roll eyes with someone at daily workplace annoyances and discuss problematic workplace issues, which helps workers manage stress, burnout and toxicity, he said.

Work spouses discuss things like work (81 percent), co-workers (75 percent), as well as their real spouses (44 percent), according to Office Pulse. The majority of workers go to lunch with their work spouse (73 percent) and spend time with each other outside the office (59 percent).

Halliwell’s husband is all too familiar with the work lunches she takes with her work wife.

“A lot of our days include really, really long work lunches, which has become — in my household, at least — a point of contention,” confessed Halliwell. “My husband would go like: ‘Oh you’ve got work? You’re going to a work lunch again?’ Yes, I am.”

“And actually, we do get work done,” pointed out Jordan. “It doesn’t look like it from the outside because we’re laughing and having a lot of fun. But we work really well together so if we can get two or three compact hours with each other, we can get more done than we would do by ourselves.”