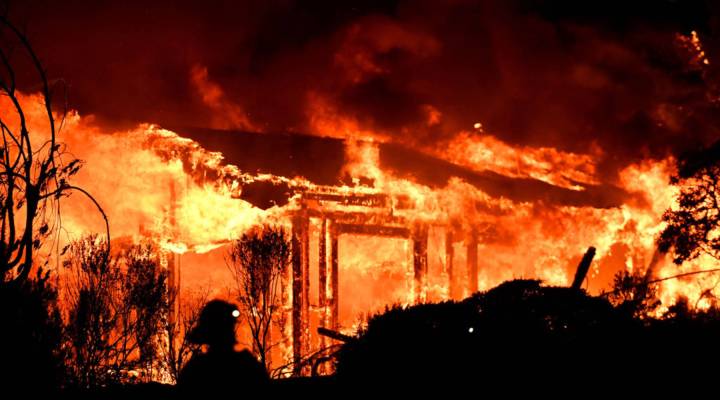 COPY
Firefighters assess the scene as a house burns in the Napa wine region of California on Oct. 9, 2017. JOSH EDELSON/ Getty Images

Firefighters assess the scene as a house burns in the Napa wine region of California on Oct. 9, 2017. JOSH EDELSON/ Getty Images
Listen Now

California has been hit hard by wildfires this year. It’s too early to know how many billions of dollars there will be in damages, but there is already a legal battle brewing over who will pay for it all.

Dennis Hunter’s business took a big hit from the fires in Northern California this October. His cannabis farm is on the outskirts of Santa Rosa, and the fires ripped through his rows of greenhouse. Hunter estimates $500,000 to $600,000 in damages. That’s just a small part of the roughly $9 billion of damage claims so far from the wine country fires.

Like many of his neighbors, Hunter has been approached by lawyers who want him to sue the local utility, Pacific Gas and Electric. Some law firms have taken out ads on Google to solicit clients. “One group dropped off a whole brochure,” Hunter said. Several firms have already filed lawsuits alleging that PG&E did not properly maintain its infrastructure.

The state has not determined the cause of the fire that burned up Hunter’s business. Jim Bushnell is a professor of economics at the University of California at Davis. He said if PG&E is found liable for things like failing to maintain power lines or adequately trim trees, it will have to cover the damages.

PG&E is investor-owned, which means shareholders would end up taking the hit. It’s illegal in California to charge customers if the utility is found liable, but Bushnell said utilities are now pushing regulators to change that. He said they would like the costs of wildfires and lawsuits to be considered part of delivering electricity in California.

Here’s the question utilities are posing said Bushnell: “Is getting sued for fires just an ordinary aspect of being in the electricity delivery service? Or is this something that reflects a negligent or irresponsible act by the utility?”

Marc Levine, a state assemblyman from the Bay Area, said the burden should not fall on customers if the utility failed to meet safety standards. “In no way should people who have had their houses burned down or who have had neighbors lose lives pay increased rates because of the negligence of utilities,” Levine said.

Levine is one of several lawmakers introducing a bill to make it even harder for state utilities to have customers cover the cost of fire damage. This cause just had a big victory —administrative law judges ruled that a utility in San Diego couldn’t pass on $379 million in damages from a fire in 2007.

“We’ve seen in multiple fires and tragedies that utilities are looking to compensate by increasing rates,” Levine said.

A spate of fires has ripped through the drought-ridden West Coast in recent years, which has cost utilities billions. In a written statement, PG&E said that “wildfires pose real risks to our entire state’s economy and infrastructure. Given these devastating effects of climate change, this is a vital statewide safety issue that impacts every person and community in the state.”

Those suing PG&E said the utility should be doing more when it comes to safety. Gregory Wilson is one of over 300 plaintiffs suing the utility. At a press conference Wilson told reporters how he and his wife survived the Santa Rosa fires this fall by hiding in their pool. He said they had to keep diving underwater to escape the heat, while their house and property burned all around them. Wilson told his story in a whisper. He said the smoke had damaged his vocal chords and that now he could only talk in hushed tones.

Lawsuits from plaintiffs like Wilson continue to pile up, but they may be in limbo for quite a while. According to the state, it will be at least a few months before it concludes its investigation into what caused the fires.