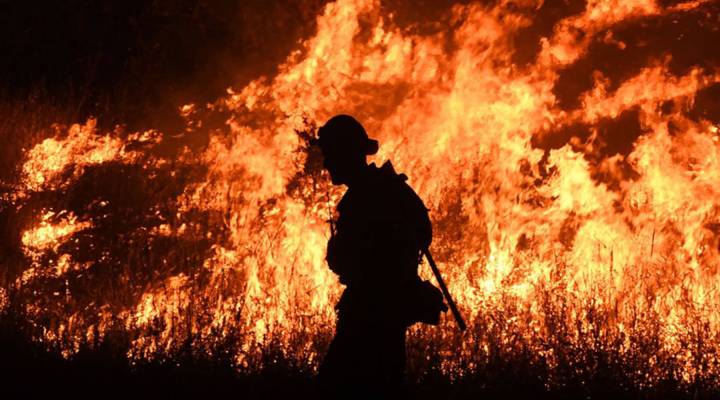 COPY
Firefighters conduct a controlled burn to defend houses from the Ranch Fire, part of the Mendocino Complex Fire, as it continues to spread toward the town of Upper Lake, California, on Aug. 2. MARK RALSTON/AFP/Getty Images

Firefighters conduct a controlled burn to defend houses from the Ranch Fire, part of the Mendocino Complex Fire, as it continues to spread toward the town of Upper Lake, California, on Aug. 2. MARK RALSTON/AFP/Getty Images
Listen Now

The Mendocino Complex Fire continues to burn in California. It’s the largest in California history and one of many burning in the state. Scientists tell us that climate change is likely to make wildfires more frequent, more extreme and more expensive.

Before the Mendocino Complex, last year’s Thomas Fire north of Los Angeles was California’s biggest. It started next door to Thomas Aquinas College.

Sarah Abood was with her fellow students in the chapel of the Catholic college on the night that the Thomas Fire broke out.

“And benediction’s happening, so Father Buckley is up at the altar and blessed sacrament is out,” Abood said.

Suddenly, bells began ringing nonstop and school officials announced there was a fire. The students rushed out to be evacuated.

“And we looked straight to our right, and right behind the hill right there was just glow of orange from the fire,” Abood said.

On a recent afternoon, she pointed out how close the flames got.

“This tree, I guess about a third of the way up, has been charred, and then that one, too,” she said.

Sarah Abood, a junior at Thomas Aquinas College, stands in front of trees that burned in December 2017 during the Thomas Fire.

Aside from some burned trees and a scorched dormitory door, there was barely any damage to 130-acre campus.

Still, even miracles have aftermaths, and an official said the school had to spend money to make the campus whole again in the months after the fire.

“There was quite an expensive kind of a smoke abatement crew that came through and cleaned all the buildings, because everything smelled like smoke,” said John Goyette, dean of the college.

A dormitory door was charred by the Thomas Fire in a close call for Thomas Aquinas College.

Goyette said insurance and donors covered their costs. Others weren’t so lucky. All told, the Thomas Fire destroyed more than a thousand structures and caused nearly $2 billion in damages.

Several victims have filed lawsuits against the region’s power company, Southern California Edison, claiming it’s to blame for the fire. An official cause hasn’t yet been determined, but the utility has reason to be concerned because California has strict laws when it comes to utilities and wildfire liability.

Edison and other investor-owned utilities would like to change things so their shareholders aren’t necessarily on the hook when their equipment starts a fire. Downed power lines have been the cause of other recent fires in the state, including last year’s deadly wine country fires, estimated damages from which exceed $10 billion.

Some utilities have warned they’re in danger of going bankrupt if shareholders have to pick up the cost. In the aftermath of the Thomas and other fires, politicians have proposed bills requiring utilities to do more.

California lawmakers are now considering changes like allowing utilities to sell bonds to help cover damage costs. A potential major change would require the power companies to submit plans to reduce fire risk. Then the utilities would be judged according to whether they stuck to their plans. Critics worry because that opens the door for the companies to pass on wildfire costs in the form of higher power bills.

Bill Dodd, a Democratic state senator from Napa, said that could be kept fair by giving more authority to the California Public Utilities Commission.

“You know, they can protect ratepayers while they’re hardening the grid, but make no mistake about it, there is no free lunch,” Dodd said. “Those costs are going to be shared by shareholders and ratepayers alike.”

Critics say that power companies are in the best position to make sure fires never start in the first place. Mark Toney, executive director of The Utility Reform Network, said any break granted to utilities threatens a strong incentive for them to be vigilant.

“The only way to do that is to make sure when they’re responsible for starting fires that their shareholders pay and not the customers,” Toney said.