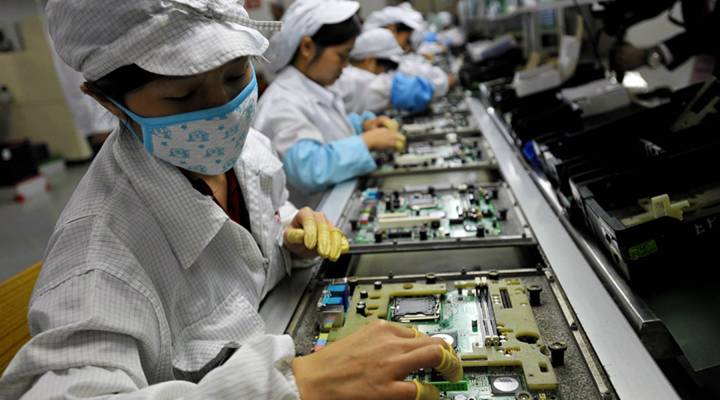 Andrew Ng thinks a lot about getting machines … to think for us.

He was the founder of the artificial intelligence research project Google Brain. And his latest company is called Landing.AI. The startup has partnered with the electronics manufacturing giant Foxconn, as well as other companies in Japan, Taiwan, and mainland China to bring more AI into the manufacturing space.

Ng says that AI has the potential to revitalize the factory floor. But he warns there’s also potential for job loss — and points people towards another company he founded, Coursera, where he says people can learn new skills to help them stay employed in an AI-filled world. He spoke about all this with Marketplace Tech host Molly Wood. The following is an edited transcript of their conversation.

Andrew Ng: Our focus for the last few months has been manufacturing. And whereas the IT world has done a great job shaping your digital environment, it’s really the manufacturing world that shapes a lot of your physical environment. So we set about implementing a digital transformation on your physical world. So I think we can make that much better and the revitalization of the manufacturing industry both in the U.S. and globally, I think, will be through AI.

Wood: Can you give me an example of the role that AI could play in factories?

Ng: Here’s one example. Today in some factories there are maybe thousands of people squinting to spot flaws, spot defects in very small parts. It turns out that an AI can do this very reliably, often even better than people can. But look at the great AI companies, AI doesn’t do just one thing in these companies; they do a ton of things in these companies and it will be the same in manufacturing.

Wood: Foxconn is a name of course that’s familiar to a lot of people in conjunction with working conditions. Do you hope that some of this technology can improve conditions for workers in factories?

Ng: These new jobs will be different than the previous wave of manufacturing jobs, and they will require new skills. one of the challenges is to create great jobs, good conditions, high-paying jobs — many people will need training or retraining.

Wood: How much is retraining going to be a part of Landing.AI?

Ng: I think that solving the job impact of AI will require significant private and public efforts. And I think that many people actually underestimate the impact of AI on jobs. Having said that I think that if we work on it and provide the skill training needed, then there will be many new jobs created. And people often think about AI replacing people, and sometimes that happens. The way AI complements people’s work, it actually creates a lot of new jobs, a lot of demand. For example, if a automatic visual inspection technology helps spot flaws in manufacturing parts, I think that in some cases, this does create a lot more demand for people to come in to rework or to fix some of the parts that an AI has found to be flawed. So the job story is complex. But even in cases where AI complements people and actually creates more demand for people work, there will often be new skills needed, which is why I think governments and private companies should think and work seriously on retraining solutions.

Wood: It sounds like you’re saying it’s expensive, though. Whenever someone talks about a public private partnership, that sort of suggests you can’t do it all yourself.

Ng: I think that some of these things really need the support of government. Over the last few years, the rise of digital content, things like Coursera, Lynda.com, really the rise of massive open online courses, the rise of digital content. I think we now know much better and much more efficient ways to train people than ever before. None of us have the full solution. But at Landing.AI, we actually have people who are dedicated to thinking about this right now.