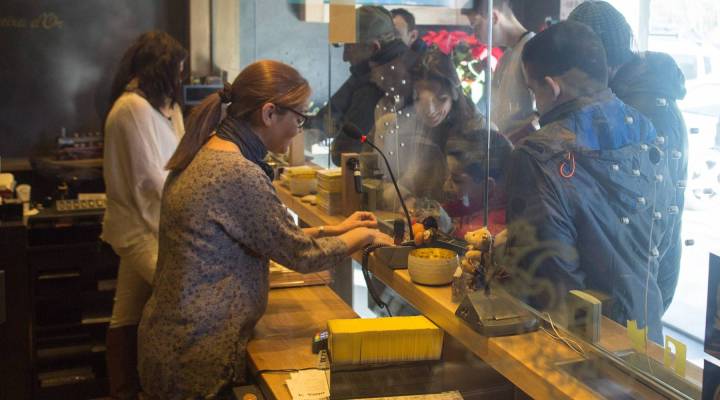 COPY
People line up for hours to purchase their Christmas lottery tickets in Spain. About 75 percent of adults in the country participate in the lottery draw each year.  Zach Campbell/ for Marketplace

People line up for hours to purchase their Christmas lottery tickets in Spain. About 75 percent of adults in the country participate in the lottery draw each year.  Zach Campbell/ for Marketplace
Listen Now

The Spanish Christmas Lottery is one of the world’s largest lottery draws. It’s celebrated every Dec. 22, with a payout of more than 2 billion euros. There are scores of grand prizes – thousands of people cash in on some kind of winning ticket each year. The lottery – commonly referred to as El Gordo for its large sum – dates back to the 18th century, when King Carlos III brought the idea from Naples, and it has been celebrated every year since 1812 – even through the country’s civil war.

El Gordo is more than just a moneymaking opportunity: it’s a community event. In a small mountain town called Sort – which means luck in the regional language of Catalan, dozens of people from all over Spain line up to purchase their lottery tickets in hopes that the place will live up to its name.

Anabel Garcia and Maite Esturi talk over each other as they explain that participating in the Christmas lottery is a tradition. But it’s also about hope. Xavier Gabriel knows that. He’s the owner of the lottery office in Sort – known as Bruixa d’Or, or the Golden Witch – a popular spot for buying lottery tickets. It’s issued 35 winning tickets since he took over.

“People want to have the experience, it’s mystical, passing by the witch, taking a photo,” Gabriel said. “But I’m a businessman, I don’t consider myself a magician.”

Gabriel has built a lottery empire. Lottery offices are government sponsored, but individual owners make 4 percent commission on each ticket sold. And his office sells almost 19 percent of all lottery tickets sold in Spain. Gabriel built a coffee shop next door, which sells merchandise and books he’s written, and installed a statue of a golden witch that people rub their tickets on for good luck.

And the long lines outside his office? That’s nothing, he said. Eighty-seven percent of his sales are online.

“The secret is in there,” Gabriel said. “It’s in ensuring the maximum amount of sales to have the highest probability of wins.”

Sociologist Roberto Garvía at Madrid’s Universidad Carlos III has researched the lottery. He said tickets for El Gordo are subdivided so that people can opt to buy a share of a ticket, which makes it more affordable for many. So people can buy a one-tenth stake for 20 euros, and if they win a prize, they get 10 percent of the total. Friends, family and co-workers get big groups together to split the cost of a 200 euro ticket, with the idea of also splitting the prize.

“They are not exactly playing the lottery, they are showing that they are members of a group and they don’t want to be left behind,” Garvía said.

He said that around 75 percent of Spaniards participate in the Christmas lottery. And year-round, they spend almost 2 percent of the country’s GDP on lottery tickets.