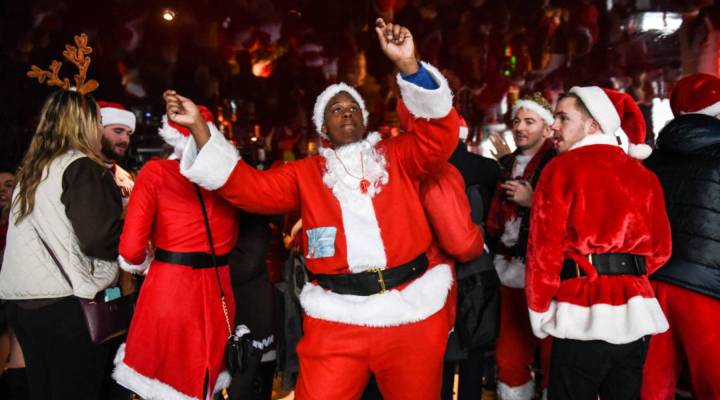 December means lovely celebrations with your family — and also, sometimes, at work. When you factor in gift-giving and holiday parties, you start to realize that there’s whole universe of etiquette this time of year.

Thankfully, our regular guest Alison Green, who writes the blog “Ask a Manager,” is here to help guide us through any holiday faux pas. Marketplace host Lizzie O’Leary went to Green for some holiday-related work advice. The following is an edited transcript of their conversation.

Lizzie O’Leary: All right, our first question comes to us from listener Laurin Arnold in Glenwood Springs, Colorado. “Is it OK to give my manager and her manager a present for the holidays? What about a holiday card?” I guess we call this “gifting up.” I hate the word “gift” as a verb. But anyway, Alison what’s the etiquette here?

Alison Green: So etiquette says no on the gift. The etiquette rule is supposed to be that, at work, gifts should flow downward, not upward, meaning that your manager can give a gift to you, but you should not give a gift upward. And the reason is the power dynamics in the relationship. Because otherwise people may feel pressured to buy things for the person who signs their paychecks, and it’s not OK for managers to benefit from their positions in that way. That said, a lot of people do ignore this rule. And if you’re in an office where everyone else is giving gifts to the boss, that can feel kind of awkward to be the only one who doesn’t. So it’s not a cardinal sin to do it, in that case, if you want to. But if you don’t see others doing it, I would resist the urge since your boss might feel awkward about it, too. But a card is great. You can stick to a card or maybe bring in some baked goods. Food is always pretty safe to bring in, especially if you’re bringing it for your whole team to share.

O’Leary: I want to stick with the card thing actually because we got a question about greeting card etiquette, and I want to read that one to you. Megan Feth wrote us saying, “I’m a person that sends over 250 holiday cards a year. Our family is constantly moving, with my spouse’s job (a military family), and this is a way that my present and past co-workers, as well as friends and family, can keep in touch. Should I ask my office manager for a list of home addresses for my co-workers for the cards to be mailed? Should I personally ask the co-worker for the address? Or should I just leave the cards on their desk? Our office is made up of 25 employees. I’ll let you know that when it comes to mailing things, I’m a bit of an old soul, so correct mailing etiquette is huge for me.” OK, so clearly Megan is someone who really cares about holiday cards, and it’s very important to her. How would you handle this?

Green: I would stick to leaving the cards on people’s desks, because not everyone will feel comfortable giving out their home addresses, let alone, I think, having the office manager give it out on their behalf. And really, this is more of a work thing than a social thing, even though it feels kind of social. So it’s OK to stick to passing them out at work rather than sending them in the mail. That said, since Megan moves around a lot, and she mentioned she likes to send them to former co-workers to stay in touch, certainly when she leaves that job, she can ask people one on one if they would be up for sharing an address as she can stay in touch. And then they have the choice to opt out.

O’Leary: Yeah, I mean, we did get a comment from someone who, I think, heard a teaser trailer for this segment, and said, “Oh, my God, I would be so weirded out if my office manager gave out my home address.” So, you know, people think of their offices in so many different ways. And clearly, I could see that being something that kind of freaked somebody out a bit.

Green: Yeah. And you got this really easy way right there to distribute cards at work by doing it in person or leaving them on people’s chairs. And that’s really the way to go.

O’Leary: I want to go back to gifts for a moment. We got a bunch of different questions about what to do if somebody unexpectedly gives you a present. You have that moment of like, uh, thank you. And maybe it’s someone you don’t even know very well. How do you deal with this?

Green: Yeah, that can feel really awkward. I don’t think it needs to. It really is OK to just give a sincere thank you. I think at work there is a divide between the gift-givers and the non-gift-givers, and this is a context where most people aren’t terribly upset if their gift isn’t reciprocated, especially since gifts at work tend to be small ones. It’s usually the person receiving it who feels weird about it. If it will make you feel more comfortable, it’s pretty easy to follow up with something small, like a card, or a gift card for the local coffee shop, or cookies. You don’t have to do that. But if it’s going to bug you, that’s a good way to go. And again, there’s an exception here. If the gift came from your boss, you can accept a gift from your boss with no guilt about not reciprocating.

O’Leary: Let’s move on to holiday parties, which is an incredibly fraught topic for so many reasons. But I want to handle some of those sort of banal ones first. Let’s say you are not that into holiday parties. You know, work is work; it is separate from celebrating for you, but you work in an office where people are really into it. How do you handle this? How do you survive it?

Green: I hear from so many people at this time of year who really don’t want to attend their office holiday parties. I think this one is really common. Attending is often a good career move. The thing that can help, if you’re really dreading it, is to realize that you can just stay for a short while. You know, go, be seen by your boss and any other key players, and then duck out early. You’ll get the points for showing up, but you can be home and in your pajamas before the event is even over, if you want to. Which is what I would want to do. And you know, it’s a couple of hours one night a year, and sometimes people end up enjoying themselves more than they think they will. I know that I’ve gone to office holiday parties telling myself, “I’m going to leave after an hour,” and then ended up staying longer because it did turn out to be kind of fun. So you never know.

O’Leary: What about the flip side? You recently wrote about this. You know, someone who is really into parties, but the office party is really awful.

Green: Yes. Some offices just aren’t into holiday parties. You can always suggest something low key. You know, a potluck during the workday. And maybe people will be into that. But I think if you are a socializer who finds yourself in an office of people who aren’t, in some ways you’re getting to experience being in the minority that introverts themselves are usually in in most offices. And that can be an interesting shift in perspective.

O’Leary: We are obviously in this massive moment of re-evaluating work, particularly for women, but for everyone really. And holiday parties are kind of right in the middle of that. There have been these high-profile examples of companies saying, you know, you could have a two-drink ticket, or there won’t be any alcohol, or the guidelines will be, you know, very strict. This is a real thicket. What do you think are maybe some sort of mental guidelines for people to keep in mind when they are going to one of these parties, or, if you’re the boss, you know, for planning and throwing one.

Green: Yeah. I would stick to one drink, two at the most. You know, alcohol lowers your inhibitions, and you don’t want to lower your inhibitions at a work event. We have inhibitions around our co-workers for good reason. And I think, too, if you brought a date, make sure that they know that this is a work event, not a social one, and that neither of you should be drinking very much. You don’t want to have to deal with a drunk date or have to apologize for their behavior at work the next day. On the boss side of it, I think, make sure that you’re not making the event really focus around alcohol. Traditionally a lot of companies have thrown these very alcohol-soaked events, and then, surprise, there’s problems. So I think, you know, make it focus around food, or socializing, or games, or something where drinking isn’t the main attraction.

O’Leary: Is it necessary to have sort of a conversation about this stuff beforehand or send the email out to the company? Or is that treating your colleagues like children?

Green: I think it depends on what you know about the people who work for you. You know, if there have never been any problems, and you know that the people who work there are conscientious and responsible, it’s a risk, I think, but it’s probably a pretty educated risk to figure that you’re going to trust people to behave like adults and to keep an eye on what’s going on at the party. And if you see problems, to be forthright about intervening and dealing with them. On the other hand, if you know that you work with people who overdo it at happy hours, and if there’s been problems in the past, it’s worth addressing it up front.

How to survive (even thrive) at the company holiday party