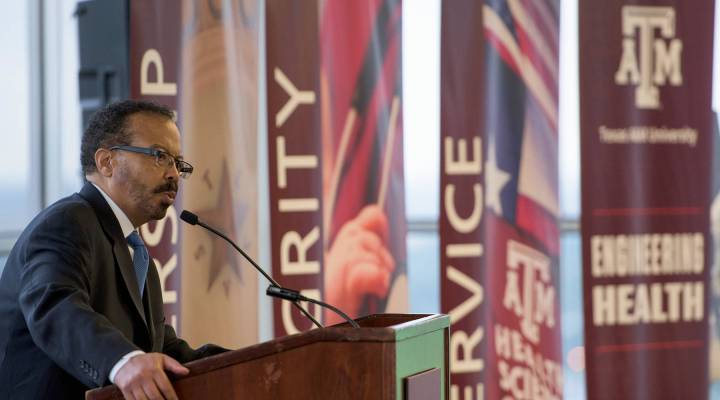 Medical school students today are trained to diagnose complicated diseases, but they are rarely trained to engineer the solutions themselves. To change that, soon Texas A&M University will start training doctors and nurses to also be engineers.

Half a century ago, a few physicians in Canada wanted to see if they could use electrical pulses to regulate a human heartbeat. They had the medical knowledge, but they needed an engineer. Only problem was, engineers and doctors didn’t exactly hang out, according to the man who helped invent the pacemaker half a century ago.

“In those days there wasn’t much rapport between engineering and medicine, and I think that was one of the real problems in our research,” electrical engineer Jack Hopps recalled in a 1984 interview with the Canadian Broadcasting Corporation. “The medical people didn’t know the potential of engineering to a system and we knew nothing at all about the medical problems.”

In the decades since, the silos separating engineering from medicine have started to break down. You can see the collaboration at startups like Dallas-based MedNoxa. Engineer Eric Frey shows off his product — which wouldn’t exist without cross-discipline partnerships.

“Our technology [is] is a bandage that generates oxygen from the chemical decomposition of hydrogen peroxide,” Frey said. A chemical reaction between the layers of the bandage creates a concentrated oxygen gas which Frey said helps a wound heal. MedNoxa is seeking FDA clearance to sell the bandages by prescription and over the counter.

That’s the idea behind a new program at Texas A&M called EnHealth.

“EnHealth is a new initiative, the first in the country in fact, that will integrate engineering into all colleges that are part of the health care enterprise,” Roderic Pettrigrew said. Pettigrew, a doctor and engineer, is leading the effort. Texas A&M recruited him from the National Institutes of Health in Maryland where he served as the founding director of the National Institute of Biomedical Imaging and Bioengineering.

Pettigrew said the EnHealth program is different from existing university based collaborations because it integrates the curriculum into all health-related degree programs — from medicine and nursing to dentistry and public health. He believes it will help students think about better ways to diagnose, treat and prevent disease while they’re in school.

“And from this sort of engineering-based mindset — a mindset that we call ‘physicianeers’ — should emerge a group of students who are better equipped and more effective and efficient in problem solving,” he said.

That also means that students in the school of medicine would graduate with both an MD and a masters in engineering in four years. Giving doctors the tools to think like engineers would be valuable, Frey said.

“I think the more cross-training you have, the better it enables all that collaboration you need,” Frey said.

Just a handful of students are part of the pilot program at Texas A&M now, with plans for several dozen to be part of the first class in July 2019.