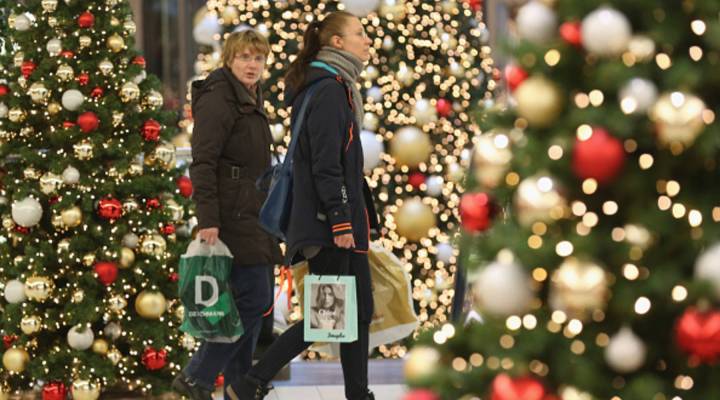 COPY
Flanders says it's what we consume around Christmas that's changed over the years. Sean Gallup/Getty Images
Brought to You By

Flanders says it's what we consume around Christmas that's changed over the years. Sean Gallup/Getty Images
Listen Now

In “Christmas: A Biography,” author Judith Flanders explores the origin of Christmas and how certain traditions came to be. Here she explains how people have been concerned about excess consumption at Christmas since its inception.

We tend to believe that Christmas today is a horrible, terrible commercial corruption of what was a warm, loving family holiday that before that was a purely religious day. In actual fact, Christmas has always been about consumption.

For most of Christmas’ history, it was about food and drink. Then what happened was in the 19th century with the growth of the middle classes, with lower prices for consumer objects, we began to see the shift into it being a time when people give children presents, you began to buy things for Christmas, and it changed to a different kind of consumption.

I think the core of Christmas is the idea that something magical happens, and let’s face it, most of life isn’t magic. So we like to believe that there was a better time, whether it’s our own childhoods when things were simpler. It’s like those Norman Rockwell illustrations of the perfect family dinner on Sunday after church. Most people, including, I’m sure, Norman Rockwell himself, did not have childhoods like that.

But the most important thing that we have bought about Christmas is the idea that it was better before. The earliest reference I found was 1616, when the playwright Ben Johnson wrote in one of his plays, he has one of the characters saying, “Oh, Christmas today is an awful, horrible thing. It used to be so much better.” We have been saying this for half a millennium.