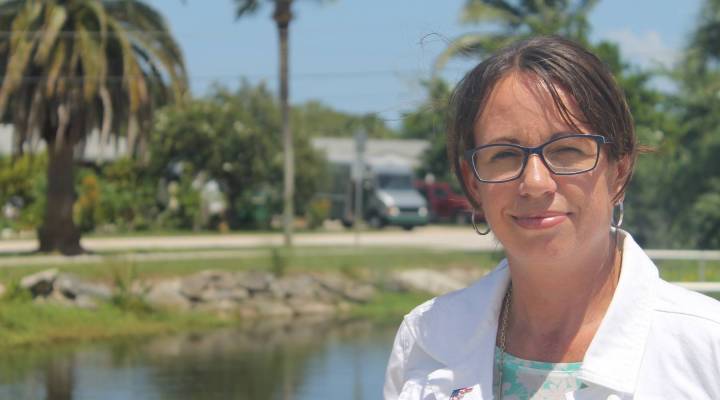 Some 13 million coastal Americans are projected to be displaced by sea level rise by the century’s end. As a peninsula, Florida is particularly vulnerable, but one city, Satellite Beach, is taking steps to plan ahead.

Satellite Beach is a quiet community of some 10,000 residents, established by rocket scientists 50 years ago near the Kennedy Space Center. It is situated on a barrier island between the Atlantic Ocean and the 156-mile Indian River Lagoon, a popular spot for surfers to paddle beyond the break hoping to catch a wave.

The waves are both a draw and threat. Just up the beach, homes perch near the edge of a 10-foot sand dune, left exposed after a series of storms and hurricanes washed away a sea wall. John Fergus, a local resident, said the beach is disappearing.

“Right now we don’t have problems other than eroding ocean shoreline. We’re blessed we’re not like south Florida where they get King Tides that flood streets and all kinds of stuff like that. But it’s coming,” he said.

Fergus has lived here since 1978, when he was assigned to nearby Patrick Air Force Base. Now retired, he is part of a community effort to plan for sea level rise that is projected to threaten homes and important buildings like city hall by mid-century, a little more than a mortgage’s lifetime away.

“We believe that in about 40 or 50 years there will be areas of the city with standing water, and so those areas we’ll either engineer our way out of it, like what you see in Miami Beach, raising roads, or we will retreat,” explained Courtney Barker, Satellite Beach’s city manager, while watching a retention pond in front of city hall.  A fountain springs from the pond’s center. The pond drains to the Indian River Lagoon and is prone to flooding when the lagoon is high. The problem is getting worse.

The community was among the first in Florida to commission a study on its vulnerability to rising sea levels. Barker said leaders are now considering how to make changes through building and zoning regulations. For instance, should different height restrictions apply to property owners who want to construct homes on stilts? She said there would be economic consequences if, for example, residents were to limit development on oceanfront property.

“When we take a property off the tax rolls along the ocean, which is the highest taxable valued property in the city, that pushes that tax burden onto the rest of the community.  So people would need to understand that. The more we prevent people from building the more people will pay for services,” she said.

Satellite Beach is an outlier in a state where leaders have offered little guidance on the problem of sea level rise. Ken Lindeman is a resident and climate change expert at the Florida Institute of Technology. “Many places are going to move forward and adapt as they can from the bottom up, whether they get support from the top down or not. Whether they get federal support. Whether they get state support,” he said.

“Eventually people in vulnerable properties are going to be in trouble. And you could just say, ‘too bad. Bad luck. You’re done,'” Fergus said. But he said that would be wrong. “If you have 40 years that’s probably not the right answer.”

The effort is difficult in part because at its heart is not only Satellite Beach’s future but also, its character. Residents like their community the way it is. Fergus said it can stay that way, with the right planning.