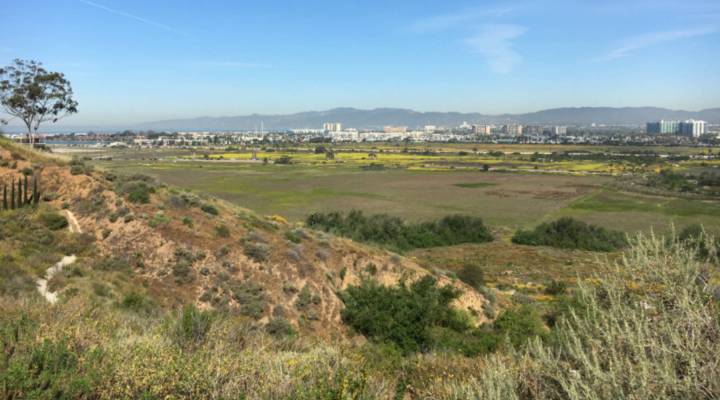 COPY
The view north from a bluff in Westchester down to the Ballona Wetlands, which is surrounded by dense residential and commercial development, crucial roadways, and a drainage channel to the Pacific Ocean several miles to the west. Los Angeles International Airport is nearby, as are active oil fields and the largest yacht marina on the West Coast. Mitchell Hartman/Marketplace
Secretary of the Future

The view north from a bluff in Westchester down to the Ballona Wetlands, which is surrounded by dense residential and commercial development, crucial roadways, and a drainage channel to the Pacific Ocean several miles to the west. Los Angeles International Airport is nearby, as are active oil fields and the largest yacht marina on the West Coast. Mitchell Hartman/Marketplace
Listen Now

On a bluff in the Westchester neighborhood overlooking the L.A. Basin just inland from the beach, one can see the Ballona Wetlands below. It’s 600 acres of low-lying marshland, an urban refuge for plants and wildlife, and also a major corridor for traffic flowing west to Marina del Rey, with its yacht slips, upscale shopping and housing. It’s also where the concrete channel of Ballona Creek flows to the ocean.

Tom Ford is executive director of The Bay Foundation, which works on coastal preservation and restoration in the region.

“We’ve got folks that are living absolutely right on the coast, and a lot of challenges—76 miles of dense urban establishment,” said Ford, pointing down the cliffs to the wetlands and the billions of dollars’ worth of public and private infrastructure that surrounds it, including one of the nation’s biggest airports.

“Seventy-plus million people flying through LAX, all those related economies, and the values of these properties and investments. Looking down at this Ballona Wetlands Ecological Reserve, I can tell all these folks living on the perimeter, this is going to protect your home against waves washing in,” Ford said. “And we’re going to protect the bluffs and they won’t erode, and we’ll make sure that the roads are safe and you can egress in a tsunami, or just maintain your daily commute.”

Ford cites current scientific predictions that global sea level could rise from 6 inches to 1 foot by 2050, and 2 to 6 feet by 2100, depending on the level of carbon-emission reduction (if any) the world achieves over the next century. He said many parts of L.A.—with its multiple mountain ranges and hilly topography—might appear to be more insulated, and defensible, from sea-level rise than other coastal cities with less altitude variation. But he said no one in the L.A. region can afford to be complacent.

“The folks living up on the bluff in Santa Monica—they’re not going to be underwater,” he said. “But everything between there and here will be. So Santa Monica is now a peninsula or an island, with a brimming embayment here? I think it’s a little cavalier to say ‘No big deal, it’s not my problem.’”

The Bay Foundation is working with state and local agencies to restore the wetlands, and it supports efforts to build up sand dunes along the coast to make the region more resistant and resilient to anticipated increases in flooding and high tides.

And Ford said regional planners are starting to figure out how to mitigate the risk to low-lying “unseen infrastructure” as sea levels rise. That includes active oil wells and former oil wells that are now used for natural gas storage, hazardous chemicals and underground utilities.

One example is the coastal intercept sewer. “It takes the sewage just to the east of Malibu, and it’s carrying 35 million gallons a day. The pipe is currently in the beach—under the beach—and that beach isn’t going to be the beach there,” Ford said. “The last thing we need is a 5-foot pressurized sewer main getting undermined by waves, cracking in half and having a septic volcano.”

There are engineering plans in development to re-route the sewer line out of harm’s way.

Nationwide, there is little coordinated planning or funding to deal with the threat posed to public infrastructure and private real estate by climate change and rising sea levels.

“There are thousands of hazardous waste sites, chemical facilities that are on low-lying industrial land around the country,” said Ben Strauss at Climate Central. “And that is a huge concern.”

Strauss is vice president for sea level and climate impacts at Climate Central, which has developed online mapping tools to show the potential effects of temperature and sea-level rise over the next century.

Based on a projection of 2 feet in sea-level rise by 2100, Strauss said, “it is reasonable to imagine defending most coastal places with a couple of exceptions: some barrier islands, South Florida, parts of Louisiana. But with 6 feet, it becomes pretty much impossible to imagine—we see severe challenges to places like New York City or Boston.”

“The three basic options are defense, accommodation and retreat,” Strauss said. He added that estimates vary widely—and are speculative at best—as to what each of those options might ultimately cost to implement on a citywide, statewide or nationwide scale.