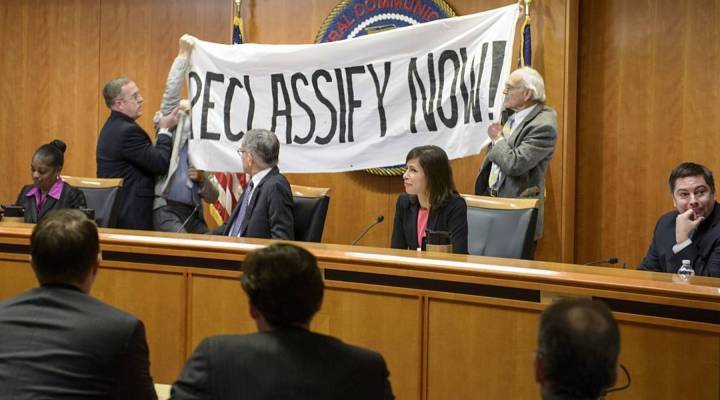 Commissioner Mignon Clyburn, Chairman Tom Wheeler, Commissioner Jessica Rosenworcel and Commissioner Michael O'Rielly watch as protesters are removed from the dais during a hearing at the Federal Communication Commission on Dec. 11, 2014. in Washington, D.C. BRENDAN SMIALOWSKI/AFP/Getty Images
The Uncertain Hour

When you write a letter to the federal government, you never know who’s going to read it.

If you visit the National Archives, you can read pages and pages of letters from concerned citizens about, say, the peanut content in peanut butter. It’s all there.

These days, you don’t have to be that organized to speak up about regulations. You don’t even need a stamp. Most government agencies make rules in a “notice-and-comment” system. It’s a process that usually only gets mainstream attention in the most extreme cases, but it’s one of the easiest ways for citizens to make their voices heard on issues that affect their lives every day. But do the rule-makers listen? That’s another matter.

The notice-and-comment system was established in 1946 through the Administrative Procedure Act. Congress began requiring agencies to offer online rule dockets and commenting in 2002. It’s an important facet to our democracy because while we elect lawmakers and the president to pass laws, the nitty-gritty implementation and enforcement of those laws falls on hundreds of government agencies. It’d be a bit uncharitable, but not inaccurate, to call them unelected bureaucrats. The APA was meant to ensure those bureaucrats are listening to the public.

Here’s how the process works: An agency, like, say, the Federal Communications Commission, posts the draft of a proposed rule online for the public to examine. Citizens then have a set time period, usually between 30 to 60 days, to submit comments. It’s flexible, but the Office of Management and Budget said last year the average comment period lasted 49 days.

Those comment periods come fast and they overlap: in 2015 alone there were 2,576 proposed rules, according to the Organisation for Economic Co-operation and Development. To help the public keep track of all the proposals and comment periods, the government created Regulations.gov. It’s a portal that lets users search proposed rules from hundreds of agencies, sort proposed rules by when the comment period expires and file comments.

From there, it’s really in your hands. Your comment can say whatever you want, but Regulations.gov has some best practices. The main thing to keep in mind: This isn’t a vote. Merely stating your opinion won’t have as much impact as making a reasoned argument or offering an alternative. Advocacy groups will offer pre-populated comments or talking points that make it even easier to make yourself heard but, the site warns, “A single, well-supported comment may carry more weight than a thousand form letters.”

After the comment period ends, agencies take stock of studies, expert opinions, public comments and other findings before issuing a final ruling. We saw that this week when the FCC issued its final plan to roll back virtually all the net neutrality rules it established a couple years ago. The preceding comment period, by the way, netted a staggering 22 million comments, forcing the FCC to upgrade its online filing system.

It was a historic showing, but did it matter? That’s where things get complicated and controversial. It’s really up to the agencies how much they account for public comments, and the FCC has made it clear it’s unmoved by the sheer heft of those 22 million responses. Comments that “did not introduce new facts to the record but just stated an opinion … do not have much bearing on decisions,” a senior official told reporters this week.

In another wrinkle, New York state Attorney General Eric Schneiderman said this week that many of those comments were fake, form letters submitted by bots under real Americans’ names. Schneiderman said he’s been investigating the matter for months, but the FCC hasn’t been much help.

That’s kind of the rub with rule-making these days: It’s easier than ever to make your voice heard, but there’s no good way to know for sure where it will end up.