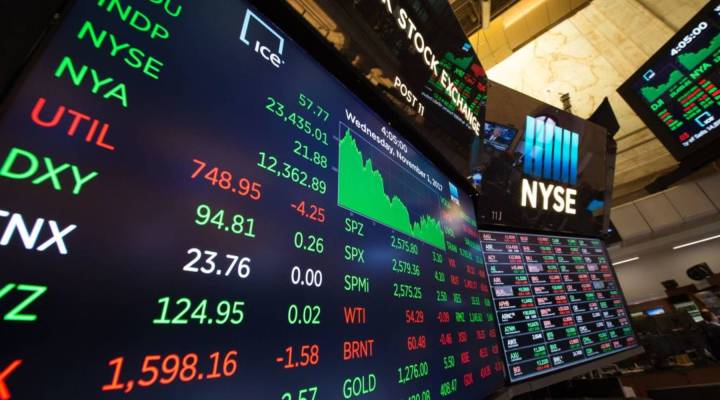 COPY
A video board with the closing numbers on the floor at the closing bell of the Dow Industrial Average at the New York Stock Exchange on Nov. 1 in New York. BRYAN R. SMITH/AFP/Getty Images

A video board with the closing numbers on the floor at the closing bell of the Dow Industrial Average at the New York Stock Exchange on Nov. 1 in New York. BRYAN R. SMITH/AFP/Getty Images
Listen Now

As more and more sexual harassment claims come to light against powerful men, it’s been a wake-up call across our culture. Especially for for corporations and investors, according to a recent article from Barron’s magazine:

Whether or not snowballing accusations of sexual misconduct, and the backlash they have sparked in the U.S. and abroad, are a watershed moment for the culture, as many hope, they are a piercing wake-up call for corporations and investors. Companies that tolerate or cover up sexual harassment, perpetuate a culture that fosters it, or fail to provide proper avenues for employees to report concerns and offenses, could pay in multiple ways, from difficulties in attracting, retaining, and motivating talented workers to customer defections, ruined business deals, and lost revenue and profit.

Katherine Bell, Barron’s editor-in-chief, joins Marketplace Weekend host Lizzie O’Leary to discuss how sexual harassment is playing out for the stock market, and why investors are now paying more attention to workplace culture. An edited version of their conversation follows.

Lizzie O’Leary: This has obviously been a year where we’re talking a lot about harassment of all different kinds. Before we get into this piece, I’d like to get just a little historical perspective about how investors have viewed harassment in the past. Have they cared as an investment risk?

We actually looked at tens of thousands of annual reports and looked for how often the words “gender,” “harassment,” “discrimination” came up. And it’s been pretty flat over time.

O’Leary: You were diving into company documents?

O’Leary: How has this changed? Is it just these high profile cases or is this something investors are becoming organically concerned about?

Bell: I think it’s both. I think the high-profile cases have meant that it’s on a lot of people’s minds much more so than usual. Obviously it’s all over the media. But I think investors really are starting to see it as part of a larger set of corporate culture risks.

Bell: That’s not even taking into account turnover, and lots of people leave after they’ve encountered a situation like this. The latest figures I’ve seen on the percentage of women who say they’ve been sexually harassed was The Wall Street Journal/NBC News poll really recently. That was 48 percent.  I’ve seen other research that goes a lot higher. And, you know, in my own life, talking to my own friends, that gets much higher.

If you average that out over that percentage of the workforce, that is a lot of money.

O’Leary: So how does this play out? What did you find when you looked at how investment advisers, pension funds, etc. handle this? What are they doing with their money?

Bell: There are two things we saw when we talked to portfolio managers. The first one was that they were specifically avoiding investing in companies that had any sort of controversy about this. So, you know, somebody from Morgan Stanley told us that she’s not investing in companies that have outstanding litigation. That’s sort of an obvious example. But other people told us as well (that for) companies in general that are having problems with this, they’re avoiding.

O’Leary: Well you mentioned the documents earlier — and litigation makes sense, you can see that, you can quantify it, it’s often public — but this is also a difficult thing to measure. If you are a socially conscious investor how do you get the information anyway?

Bell: It is really hard to measure. And you know I think that’s a problem with all of this. But Morgan Stanley actually also did a really interesting study last year where they looked, in general, about how cultures that support women, where they looked at a bunch of different factors. They weren’t looking at harassment specifically, but they were looking at pay equity and representation all the way through the company, especially at the top. They were looking at discrimination policies. That sort of thing.

They found a real impact on return on investment and return on equity. They saw that companies that handled these things well and just generally had cultures that supported women and that had more women in the company, that they were actually doing better financially. And it’s not just the returns, but there was also lower volatility, which is important. There’s less probability that there’s going to be a big drop in the stock.

O’Leary: When we think about investors priorities, at the end of the day, they are there to make money. Whether for themselves, for someone who’s getting a pension, someone who’s in a 401k etc. Whoever is doing that, wants to make money. And so where does this fall, do you think, in the way a money manager and a portfolio manager assesses a company? You know, are they willing to say, “Maybe they’re not so great for women but wow, their sales are way up this year!” You know, how did they puzzle through that equation?

Bell: Well, I think what’s interesting about this — I mean, you’re right, of course, the money is the bottom line — but investors are starting to realize that there is the possibility that something could come, seemingly, out of nowhere from the outside. And really, really affect the company’s reputation. Affect the company’s workforce. And they’re really saying that alongside all the other risks — cybersecurity risk, all of these sorts of risks — this is another one that could could have a huge effect. Either slowly over time, in ways that are hard to measure but measurable, or in one fell swoop, which we’ve seen with Harvey Weinstein and we’ve seen a lot in the past year.

O’Leary: Are companies aware of all this? You know, are they responding? Do you think they connect “someone might not buy my stock because of the toxic culture here?”

Bell: Well, one of the problems up until this point — and the big question is are we at a tipping point? Is this going to change? But corporate boards and both private and public companies have not seen the culture in the company as something that is their job to talk about. There’s one survey said that 77 percent of boards hadn’t talked about sexual harassment.

Bell: That’s what I think could be changing right now. I think it’s so much part of the conversation that boards are going to be starting to talk about it. That’s what could really change things.