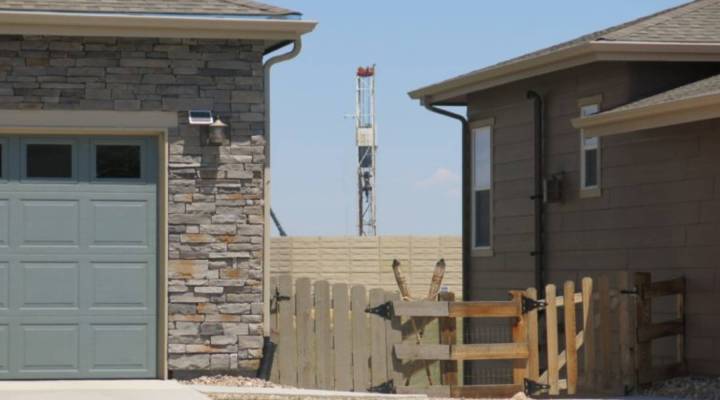 COPY
A drilling rig near homes in Erie, Colorado.  Leigh Paterson/ for Marketplace

The oil and gas industry is pouring hundreds of thousands of dollars into local politics in a Denver suburb, fighting a measure that could give the city more control over drilling. This ballot question is part of a much larger fight over health, safety, policy, and state law that is playing out in towns across northern Colorado as oil and gas development moves in.

“That’s my new house. That’s the back of it,” said Mackenzie Carignan, pointing to new construction in Broomfield, Colorado, a city north of Denver. When her family moves into their new home, they’ll be much closer to a new oil and gas project that calls for drilling 84 wells in the city. Population is booming in Broomfield, but so is oil and gas.

“It’s only common sense that there’s gonna be this conflict between housing developments and oil and gas developments,” Carignan said. Many residents feel that state regulations just aren’t good enough to protect neighborhoods near drilling. “There’s a reason why people in Broomfield are making our own laws. That’s because nobody else is doing it for us,” Carignan said.

She’s talking about Ballot Question 301, which she supports. The measure would require the city council to take the health and safety of residents into account when considering new oil and gas development. It doesn’t sound like a big deal. But pro-drilling groups are fighting it hard, raising around $345,000 worth of cash and in-kind support. These groups are spending on things like TV ads featuring former Colorado Gov. Bill Owens. In the ad, Owens tells residents,”301 doesn’t protect people, it’s a cynical power play focused on blocking energy development. Period.”

Opposition groups are also spending on Facebook ads, robo calls, mailers, and canvassing. “Of course, gas and oil will spend by and large what it takes. I think their feeling is that if they lose one city, they will lose many cities,” said Floyd Ciruli, an independent political pollster based in Denver.

So far, the fight against 301 has been funded by two main groups: The Colorado Petroleum Council and a pro-drilling nonprofit called  Vital for Colorado. In a written statement, Vital for Colorado said that the group opposes all efforts to “cripple” one of the state’s most important economic sectors through campaigns at the state and local level.

What happens with oil and gas issues here in Colorado matters elsewhere, Ciruli said. “It could affect other state politicians. It could actually create a dialogue nationally and so their goal is to try to win as much as possible,” Ciruli said.

The conflict here is getting more and more intense thanks to a powerful mixture of factors: Colorado’s history of local control, its strong environmental values, and growth in population and drilling in the same place, at the same time. But here’s the thing about Ballot Question 301: it’s tricky. That’s because any limitations the city puts on drilling could conflict with state regulations and state regulations preempt local rules when it comes to oil and gas.