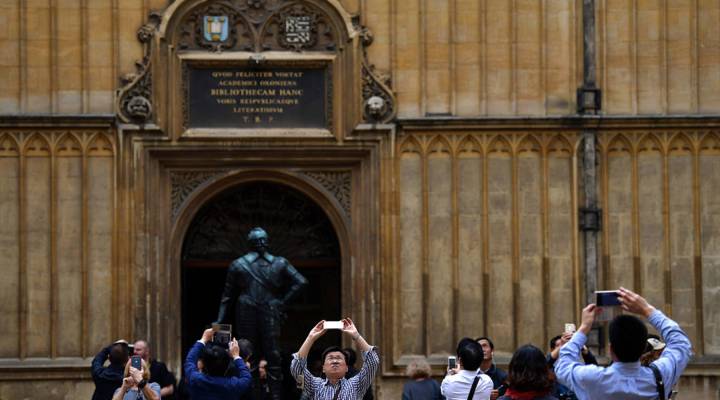 This summer, there have been clear signs of a backlash against mass tourism in some of Europe’s most popular tourist destinations. The residents of  Venice, Majorca and Barcelona have been protesting against the impact of ever-increasing visitor numbers. Now we can add the U.K. city of Oxford to the list.

City councilor and former Lord Mayor of Oxford, Mary Clarkson has described the ancient university town as a “tourist hell.”

“The problem is that  Oxford is a medieval city, it’s got narrow pavements and there are certain parts of the city which are absolutely full of tourists. It’s quite intimidating,” Clarkson said. “Some of them block the sidewalks and the bicycle lanes. Groups of 30 or more block your path and the noise and fumes from the waiting tourist coaches are terrible,” she said.

Clarkson insisted that she is not opposed to tourism in principle or tourists in general but she and many other residents are unhappy about the lack of  tourist bus parking facilities in the city and the way that the flow of visitors is handled.

The manager of one of Oxford’s biggest tour operators sympathizes with Clarkson’s complaint.

“As an Oxford resident myself, and being born in this city,  I do understand that Oxford can be quite difficult in the peak of the summer,” said Jane Marshall, who runs the City Sightseeing Oxford bus tour service.

But she would not describe the city as a “tourist hell,” conceding that may not be good for her business.

The tourism business is booming in Oxford: 7 million visitors spend more than a billion dollars a year in and around the city and support one in every nine local jobs.

“Tourism is immensely important to us and it’s very successful,” claimed Martin Walker of the tourism body Experience Oxfordshire.  “I agree there are problems but these are the problems caused by success. I think a lot of towns and cities across the U.K. would want these problems too.”

Everyone accepts, however, that there is a problem, even the tourists themselves.

“So many buses in the street, you can’t even cross the street without getting almost killed,” said Patricia Stuhr, who was visiting from Germany.  And Michael Weber, also from Germany admitted that the congestion was off-putting. “Oxford is a lovely place, but it’s much too crowded with tourists,” he said. And that’s a tourist speaking.

Clarkson has come up with a novel proposal to help alleviate the crush. “I think the tourists should be encouraged to walk single file along the sidewalk, or no more than two abreast,” she said.

The city is casting about for a more comprehensive remedy and has turned for help to its other great asset: brainpower. One of Oxford’s world renowned academic institutions is now studying the problem of  how to get 7 million tourists and 150,000 residents to rub along in a small, medieval city, in the 21st century.