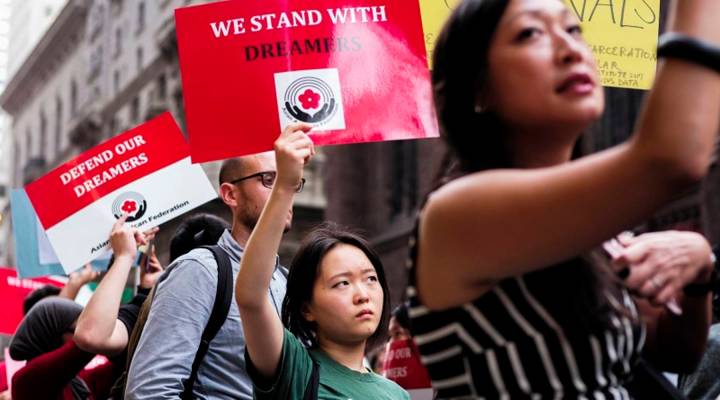 This week President Donald Trump sent Congress a sweeping list of immigration demands, including the building of a border wall in exchange for an extension of the Deferred Action for Childhood Arrivals program. DACA, as it is known, was created to shield immigrants brought to the U.S. illegally as children from deportation. And it gives them work permits. But to be one of the 800,000 current DACA recipients, you’ve got to pay up, $495 to be exact. Marketplace Weekend spoke to Doris Meissner, senior fellow and director of the U.S. Immigration Policy Program at the Migration Policy Institute, to find out more about DACA fees. An edited transcript of their conversation follows.

Lizzie O’Leary: So DACA recipients pay fees. Where does the money from those fees go?

Doris Meissner: Well, the money from the fees goes to an agency called United States Citizenship and Immigration Services. That processes their applications and the cost of doing the fingerprints, the cost of producing the card, the work authorization card, those are all costs that figure in the calculation. Different kinds of applications are set at different price levels.

O’Leary: You know, one of the things that struck us when we went out and started talking to DACA recipients, we learned about the cost — runs about 500 bucks to apply for DACA. How do they figure out that that was what they were going to charge?

Meissner: Well, there is a government regulation that determines, that guides agencies in determining how much they will charge for services, like deciding this application. And that regulation requires that they’d set the fee with what their actual costs are as an agency for handling the application. But the idea is that this is to be a process and this has to be an agency that operates as close to how a business would as any kind of a government entity could. So they are to charge what their cost of business is.

O’Leary: Well, USCIS, you know, it wasn’t always funded by fees. How did this happen?

Meissner: Well, this happened in the 1980s. It was, earlier than that, funded through the federal budget and typically, because immigration didn’t have a large constituency and for these kinds of things actually still doesn’t, because these are not people who vote, it was always shortchanged. So it tried to gain the status to be a fee-based agency and that was granted by Congress sometime in the 1980s. But when it became a fee-based agency — that tends to be the terminology that’s used — that is something that agencies like USCIS want, because it meant that they had an assured revenue source, and they did not have to compete in the same way against other agencies. So it actually has been a real improvement in the immigration system, because it does mean that the agency is able to support itself.

O’Leary: You know, when I think about something like, say, DACA that both brings in money, and I would imagine if, you know, we moved toward the end of DACA, that’s going to take money away. But how do you get a program off its feet then, say, suddenly DACA’s put in by executive order. And yet you got to make everything happen. How do you make everything happen if you haven’t gotten the fees yet?

Meissner: That’s, of course, one of the problems is that, you know, where does an agency get the upfront money in order to invest in the processes that are required for a new program? That was particularly difficult with DACA, because Congress can, if it’s supportive of a particular program, allow for upfront funding. But it did not do that with DACA, because it didn’t approve of DACA, and that meant that the agency had to shift its personnel around in ways that made them available. That meant that almost by definition, there became delays in some other parts of the immigration system where people didn’t get their applications decided as quickly. So there’s a real juggling act that comes along with this kind of a fee-based system.

O’Leary: Well, if DACA goes away, what happens to the money that those fees have been bringing in?

Meissner: Well, that money, of course, won’t be there, but they will have facilities most likely that they have been paying for and the contractors that are generating the identification documents, the work authorization documents. So all of that will have to be adjusted, but for a while, that will be a problem for the agency to adjust.

O’Leary: You know, we have so many conversations on this show about budgets and federal budgets and Congress holding the purse strings for different things. You know, since this is a completely different model, I’m just curious, do you think it’s a good one?

O’Leary: How do you think that serves immigrants? You know, some people will have the money to pay these fees, some people won’t.

Meissner: There is a bigger argument that you’re suggesting, I think, and that is whether in fact this is a public good as compared to an individual good. I mean, the philosophy, of course, has been that this is a service that gives that private individual a good, therefore the individual should pay for whatever it costs. You know, the counter argument is that it’s in the public interest. That argument is still out there but it is not one that has a strong following at all, and it certainly isn’t one that budgeteers have accepted or taken seriously for a very long time.