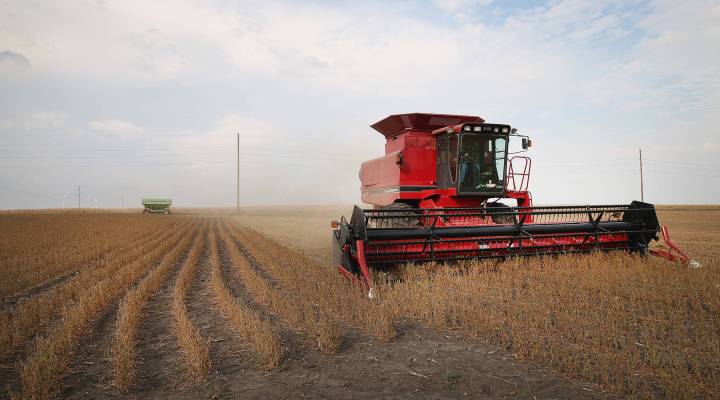 A massive dead zone in the Gulf of Mexico grew to the largest size on record this year, expanding to an area as big as the state of New Jersey.

Rivers and streams across a huge swath of middle America drain into the Mississippi River and then down into the Gulf, and the nutrients nitrogen and phosphorus accumulate in that water as it washes down, too. Chemicals that start as nutrients for crops become runoff that gets into waterways from farm fields, and then turn into pollutants for sea life at the end of their journey.

“These nutrients are coming from 12 main states, Minnesota being one of them,” said Dave Wall, a research scientist in the watershed division of the Minnesota Pollution Control Agency.

The Mississippi River starts in Minnesota, a major producer of corn and soybeans. Wall said when nutrient pollution eventually reaches the Gulf of Mexico, it feeds the growth of algae. The algae’s decomposition uses up oxygen in the water.

“In these areas, the oxygen is reduced to a point where often the aquatic life dies or has to swim away to an area where there is oxygen,” Wall said.

Minnesota is trying to limit nutrient runoff from farms. There are some new regulations, but a lot of the efforts are voluntary, relying on the initiative of farmers like Sam Peterson in southern Minnesota.

Peterson’s family is using less fertilizer than it used to. They test the soils to see where it’s really needed instead of doing blanket applications.

“It works out really well, because you apply it where you need it, and definitely reduces the total amount of nitrogen you’re putting down on the farm,” Peterson said. He’s also got a grant to study different methods of limiting nitrogen use. He’s hoping to show other farmers how they can save money on fertilizer.

But Peterson said he’s also thinking about shrimpers in the Gulf who farm the sea.

“I kind of feel for those types of people,” he said. “I know the Gulf creates a lot of jobs, and it’s going to hurt our economy if that’s not there.”

But switching farming methods takes upfront investment for producers. The Petersons have to pay to get their soils sampled, for example.

Don Scavia, a natural resources and environment expert at the University of Michigan, said the problem does not simply come down to farmers’ unwillingness to change.

“I think if they could do it and still be profitable, they would,” he said.

He said the U.S. could use the Farm Bill to incentivize farmers to help reduce the phosphorous and nitrogen flowing into the Mississippi. He said we could let farmers choose how they want to tackle the problem — using less fertilizer, planting cover crops or other methods.

“So actually pay for the environmental outcome,” he said.