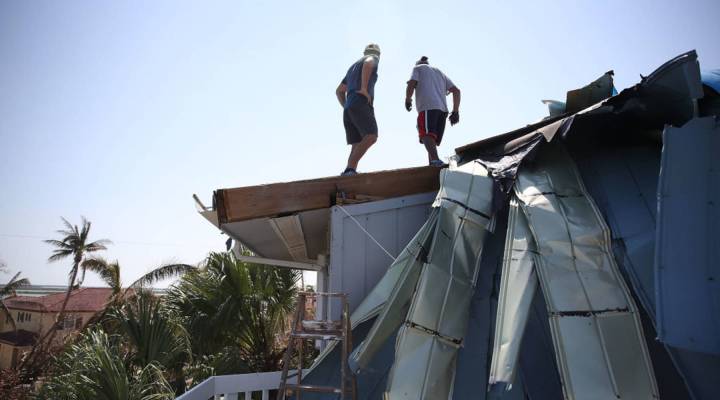 Just over a year ago, Lillie Gumm, 63, woke up to find her Baton Rouge, Louisiana home filling with water.

“Within a matter of about maybe 30, 40 minutes, the water was just above my knees,” Gumm said. “There was a very strong current in the water.”

Gumm flagged down a passing school bus and, along with her grandson, caught a ride to higher ground, then a shelter.

She was shocked at the disaster because as with Hurricane Harvey, most of the people who flooded in Louisiana in August 2016 did not have flood insurance. That was often because they didn’t think they needed it; their homes weren’t in the floodplain. One year after her home took on water, Gumm’s story is an indication to people in Texas and Florida of what recovery might look like for those without flood coverage.

After being evacuated, Gumm’s first step was finding a place to stay. She moved in with a relative, then a church friend, then another one, and another. She ended up staying with seven different people before landing in a FEMA trailer park. It was weeks before she managed to check on her home and start salvaging what she could.

“A few times I just was too exhausted to even walk to the bus stop,” Gumm said, “so I put on a mask and slept there in the house, and I ended up getting sick from the mold. I had no idea mold was so poisonous.”

Gumm also wound up demoralized, depressed, and exhausted. Without flood coverage, she turned to government assistance. After seeing FEMA assistance advertised on television, she applied. But the financial help wasn’t immediate.

“I had to wait in line like everyone else,” Gumm said.

Three months after the flood, Gumm says FEMA gave her $25,100 to start rebuilding her home. She gave the money straight to a contractor, whom she said did a terrible job. “My floors started buckling like a roller coaster, the base molding was coming apart. He basically just took the money and didn’t do everything he said.”

The money gone, Gumm moved on by cobbling together help — from free meals to construction advice—  from at least five nonprofits. A retired truck driver on a fixed income, Gumm didn’t qualify for a low-interest federal loan from the Small Business Administration. State and federal leaders had promised to help people like her, with no flood coverage. But there was no program in place to do it.

Creating that program was Pat Forbes’ job. Forbes is executive director of the Louisiana Office of Community Development, which directs all of Louisiana’s federal disaster aid. More than four months after the flood, Congress approved $1.2 billion, most of which was targeted for direct grants to homeowners. Forbes began setting up the program, called RESTORE Louisiana.

“It’s not cash,” Forbes said. “What they’re getting is reconstruction assistance. We actually either send a contractor to their house, to get it back to a decent place to live, or we can provide funding to them and their contractor who they choose.”

The first step was to fill out a survey of your damage. Gumm was on top of it.

“The day the survey hit I believe I was up maybe one, two o’clock in the morning,” Gumm said. “I wanted to get in there as soon as I possibly could.”

That was in January, but Forbes said the first payments didn’t go out until June — 10 months after the flood. The delay was largely due to how long it takes the state and the feds to approve rules for spending recovery money. Gumm was one of the first to receive a check. A state-provided contractor finished the repairs this summer, and she moved back into her house last month. But her life’s not back to how it was.

“I still have an air mattress that I’m sleeping on in my house,” Gumm said. “I have to wait patiently until things come back to almost normal. It’s not gonna happen overnight.”

Forbes said the government is getting more efficient at disaster recovery. “We started getting funds out faster in Louisiana than it’s been done before, but I hope that Texas and Florida beat our record.”

His advice to flood victims without flood insurance: do as much as you can, now, with help from family, friends or charity. Because while Congress will likely come through with a big recovery package, it won’t happen fast.