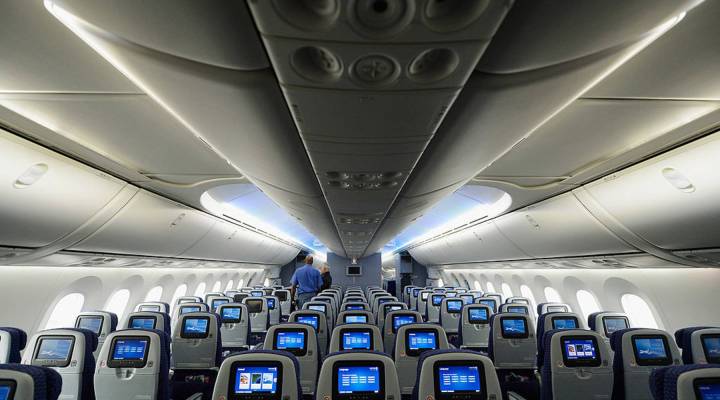 COPY
The screens offered on many flights are one way to keep you content in a tiny space for several hours. Kevork Djansezian / Getty Images

The screens offered on many flights are one way to keep you content in a tiny space for several hours. Kevork Djansezian / Getty Images
Listen Now

If you’ve taken a plane recently, you might have noticed your seat felt a little tighter. Well, it isn’t just you. Airlines are making them skinnier and leaving less room between rows in order to pack in more paying customers. But airlines have also researched what will make seats and the passengers in them more comfortable, even as things get more squished. The screens and Wi-Fi now offered on many flights? That’s one way to keep you content in a tiny space for several hours. But there are safety concerns, too; a federal appeals court recently ruled that airlines need to prove that passengers can evacuate those tight spaces in case of an emergency. Justin Bachman wrote about “The Incredible Shrinking Airline Seat” for Bloomberg. Marketplace host Kai Ryssdal called him up to talk about it. Below is an edited transcript of their conversation.

Kai Ryssdal: Tell me about this lab they have at Rockwell Collins, the seat manufacturer.

Justin Bachman: Well, it’s a research and design center. And what they do there is try to figure out what can be done to make the seat comfortable in the face of airlines trying to squeeze as many of these things as possible onto their airplanes.

Ryssdal: Quantify this for me — how much smaller are seats getting?

Ryssdal: Obviously that gets you more front to back, but they’re also making them skinnier, right, so that they can get more side to side.

Bachman: They are. The seats have gotten narrower. Like a Triple 7 (Boeing 777) used to have nine across, now you have 10 across on many airlines, and it’s getting pretty tight.

Bachman: Yeah, we’ve seen a lot more premium economy. So that’s the seat that’s not quite business, but it’s a little bit more spacious than what you find in the back. And that’s coming to a lot more airlines. For example, American started selling that earlier this year. It’s rolling out across the industry so that they have more, different types of product on the plane.

Ryssdal: Also from American, though, from your piece not only are passengers pushing back, but flight attendants are as well. The American Airlines flight attendants went to management and said: “Hey, man, we’re the ones who have to deal with all these really irate passengers whose knees are up under their chins.”

Bachman: That’s right. Yeah. American’s getting a new generation of the 737 this fall. And what they wanted to do was put three rows of 29 inches as opposed to 30 inches, which the rest of the plane will have. And the flight attendants had some real issues with that, because they’re the ones that are going to probably face this more than any American Airlines executives would. So after several weeks of back and forth, the airline relented and said, “We’ll just make the whole plane 30 inches.”

Ryssdal: There is also a court case pending, right, on the safety of this? And minimum pitch requirements so that people can get out of those planes if they have to in a hurry.

Bachman:  Right. The FAA says you have to get everybody off a plane that’s fully loaded at 90 seconds in an emergency. And there was a court case earlier this year with a consumer group that said that’s not feasible. And the court agreed because the FAA had not demonstrated that their testing had showed that. So it’s not a case where the government is going to suddenly start telling airlines to put more space, but it is a case where the FAA is going to have to demonstrate they have studies that show that even with these tight seat pitches, they can still evacuate these airplanes.