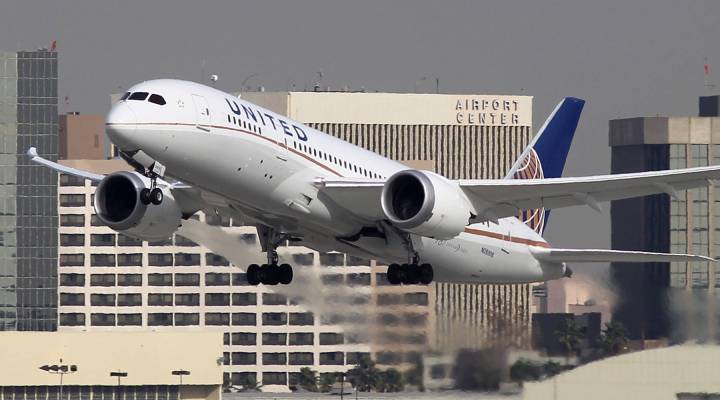 It’s been a busy day for United Airlines.

The airline has been doing some serious lifting in an effort to repair its reputation after a passenger was dragged off one of its flights. Dr. David Dao’s removal, which was captured on a widely shared video, sparked outrage and led the airline to reevaluate and overhaul its procedures for overbooked flights.

Early this afternoon, United also announced that it has reached a settlement with Dao.

“We are pleased to report that United and Dr. Dao have reached an amicable resolution of the unfortunate incident that occurred aboard Flight 3411,” according to a statement provided to Marketplace. “We look forward to implementing the improvements we have announced, which will put our customers at the center of everything we do.”

“The process of overbooking is a complicated one,” United CEO Oscar Munoz told Marketplace this morning. “It’s actually minimal. We, on certain flights, overbook by one or two people. Last year we had, I think, one in 23,000 [customers] that were involuntarily denied boarding. So it’s a very small occurrence.” He added that the $10,000 is an added incentive to avoid denying ticketed passengers the right to board.

The amount of the United settlement is to remain confidential, according to Dao’s lawyers.

“Mr. Munoz said he was going to do the right thing, and he has,” Thomas Demetrio, who represented Dao after the incident, said in a statement. ”In addition, United has taken full responsibility for what happened on Flight 3411, without attempting to blame others, including the City of Chicago. For this acceptance of corporate accountability, United is to be applauded,” he said.

Munoz seems to have come a long way in just two weeks. Shortly after the incident, he had also come under fire when his initial response was perceived as insensitive.

“It was an awful choice of words, it didn’t adequately respond to the gravity of the situation,” Munoz said. “I watched that video. My gut instinct told me to do something different, but I messed up, and I’ve taken full accountability for that.”

United is not the only airline to take a closer look at its overbooking strategy after the incident. Earlier this month, Delta was the first airline to announce that it was raising compensation for those involuntarily bumped from their flights to nearly $10,000 — up from $1,350. United said that in 2016, it involuntarily bumped about one in every 23,000 passengers. Delta’s number are slightly better, with about three passengers in every 100,000 being put on a different flight in 2014, according to PBS NewsHour.

Additionally, Southwest Airlines announced today that as of May 8, it would stop overbooking flights.

The airline had reviewed its overbooking policies in the past, but the United incident added urgency to coming up with a better solution, Southwest CEO Gary Kelly explained on an earnings call, according to Bloomberg.

“It puts the question under a bright light. Why not do it now?” he said.