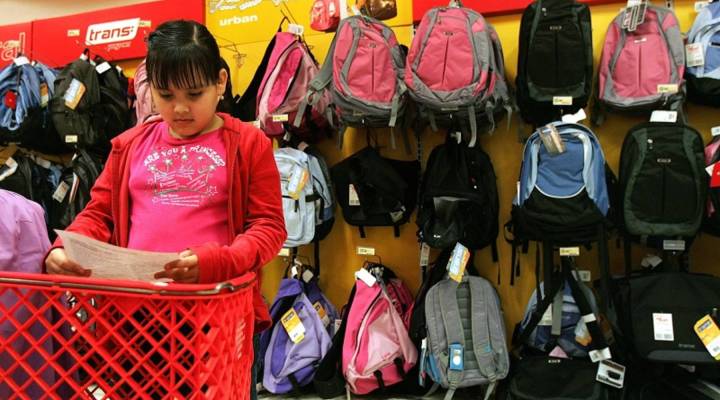 COPY
A child checks her back-to-school shopping list at a Target in Rosemont, Illinois.  Photo by Tim Boyle/Getty Images

A child checks her back-to-school shopping list at a Target in Rosemont, Illinois.  Photo by Tim Boyle/Getty Images
Listen Now

Last week on the show, we talked a lot about the costs associated with school: the cost of sending kids back to school, the cost of teacher supplies and the cost of a poor education.

This week, we’re going to talk a little about saving. Sixteen states offer tax holidays during the year, a tax-free day or two of purchasing certain items, like hunting gear and weather-preparedness products. Several of those states have specific back-to-school sales tax holidays targeting school supplies. It’s a popular but controversial tool meant to help people save a few dollars as they stock up on pencils and notebooks for the year and give local businesses a bump.

But Meg Wiehe isn’t buying it. She’s the deputy director at the Institute on Taxation and Economic Policy, a nonprofit, nonpartisan think tank that studies the effects of tax policy. She said there are very few winners in this game, and some significant losers, too.

“Ultimately, I really think that it benefits lawmakers more than anyone,” Wiehe said. “If you’re a lawmaker … you get all this free advertising. Retailers are doing all the work for you, and it looks like you’re doing something great for your constituents.”

And, she said, research has found that there’s no real benefit to retailers, who expect to see increased traffic in their stores. But consumers are simply shifting the timing of school purchases that they would make anyway.

“The taxpayers themselves, those getting the break, not really the winners either for a number of reasons,” Wiehe said.

Consumer savings is nominal, she pointed out. Take Alabama, for example, where the state sales tax is 4 percent.

“I looked at a list of back-to-school supplies that a family would have to purchase for a student at a school in Alabama: four boxes of crayons, a roll of paper towels, a box of storage bags” to name a few. The total was about $35. And the tax holiday break? “A whopping savings of a $1.36.”

The real issue, she said, is why are families and teachers being asked to buy supplies in the first place?

“[In] reality that family would save $34 if state lawmakers instead provided adequate revenues and funding for K through 12 education, including classroom supplies.”

“In most of the states on the list of the 16 that have sales tax holidays have a very high reliance on sales taxes the other 362 or 363 days of the year,” Wiehe said. “But it also leads to inadequate revenues over the long term.”

The Institute estimates that back-to-school tax holidays will cost those states a total of 231.2 million in lost revenue this year.