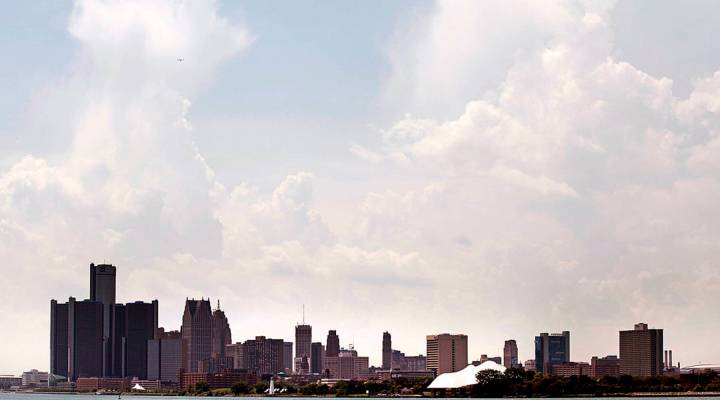 It’s one of the first things Jamarria Hall said about his education at Osborn Evergreen Academy of Design and Alternative Energy, a Detroit public school. Hall is 17 years old, tall and gangly. He spent grades nine through 12 at Osborn, one of the five lowest performing schools in Detroit named in a federal suit against the state of Michigan. The class action lawsuit filed in September 2016 alleges that the public school system in Detroit denies children their constitutional right to literacy under the Fourteenth Amendment.

Detroit’s complicated public school system has, since 1999, been in some form of state control. It’s a hard network to navigate, a constantly changing mix of public schools and charter schools that has been managed by a dozen authorizers from all over the state of Michigan who determine where and when to open public and charter schools.

This fall, the city’s independent school board will take over running the schools for the first time in over 15 years. The city has some of the worst test scores for reading and math in the country — only 7 percent of 8th grade students are proficient in reading.  There were 263 teacher vacancies as of this spring.

And then there’s the state of the school buildings themselves. “There are teachers who walk out of the classes, saying they can’t deal with it because it’s hot in the classes,” Hall said. “Boiler pipes are broken so there might be steam coming out of the heat. Then when it’s cold outside, it’s super cold in the building so people might have coats on … then there might be rodents.”

Hall is not the only one to complain about the condition of the schools in Detroit. Those indictments have echoed in testimony and reports from students and teachers all over the city. Public Counsel, the pro bono firm representing the plaintiffs along with local firm Sidley Austin (working pro bono on this case), said that these problems — the teacher vacancies, the poor conditions, lack of textbooks and materials — contribute to the issue of illiteracy in Detroit schools and violate the constitutional rights of the students who attend public school in the city.

The state argues that it can’t be held responsible for illiteracy. The state motion to dismiss reads: “While pointing the finger at Defendants, Plaintiffs ignore many other factors that contribute to illiteracy, such as poverty, parental involvement (or lack thereof), medical problems, intellectual limitations, domestic violence, trauma, and other numerous influences.” Citing ongoing litigation, the state has declined to comment on this story.

Griffith says other districts don’t struggle in the same ways Detroit does. “There are districts around the country that have high poverty rates, that have low education achievement rates in their area, yet still are able able to graduate their students, to get them up to state standards,” he said. Literacy is a much lower benchmark than many state standards, Griffith said. He compares Detroit to other school districts with high poverty rates — Chicago, Cleveland and Philadelphia — all with better test scores than Detroit.

The state of Michigan’s assertion that it’s too hard to trace illiteracy to a failing on the part of the state-run public school system doesn’t sit well with some teachers who work in Detroit public schools. They said parents and students are engaged, and with the right resources, anyone can learn.

Shalon Miller, a teacher at Cody Medicine and Community Health Academy, another of the plaintiff schools, is offended by what she perceives to be a double standard when it comes to the state. “They’re saying they can’t educate people because of a poverty issue,” she said, “but for me they’re saying you must negate poverty and educate anyway.”

Miller wears a lot of hats at Cody. She teaches special education classes, and she’s also the testing coordinator, the union rep and the prom adviser, among other things. She’s busy out of necessity — there are open positions at Cody.

Finding teachers to take positions in Detroit has been a struggle, even after the 2016 passage of a $617 million state aid package for Detroit Public Schools. Part of the legislation gives officials the option to allow non-certified educators to teach only in the city of Detroit.  The certification disparity is another source of concern for Miller, who has been teaching for 18 years.

Miller worries about the kids who go to Cody, and their futures. She said many aren’t prepared for the workforce, let alone college.

The question of workforce preparedness is one that hangs heavy over the city and the businesses operating in Detroit. The city has a high rate of adult illiteracy, an issue that was raised in an amicus brief written on behalf of the mayor’s office by Eli Savit, senior adviser to Detroit mayor Mike Duggan.

“Full economic revitalization is not going to be achieved when the illiteracy rates are so high,” said Savit.  “Literacy is foundational.”

Detroit’s once-vibrant economy has struggled for decades. The unemployment rate is just under 8 percent, nearly twice the national average. Even as new businesses come to the city — bringing with them new construction projects and jobs — Detroiters are often disqualified from open positions, most frequently because of lack of literacy and numeracy skills, failed drug tests and lack of transportation.

Nonprofit groups and private industry in Detroit are working to combat all of these issues alongside the city. DTE Energy, a Detroit utility company, runs summer internship programs for high school students and special classes to prepare potential new workers.

“We’re assessing the young people while they’re here,” said Diane Antishin, vice president of human resources operations at DTE. “We put them through a diagnostic test … to understand their literacy and numeracy skills because we want them to be able to continue on to the program that we’ve developed with a college, and we want them to be ready for success when they land there.”

While there are businesses taking extra steps to make their jobs accessible to Detroiters, it’s not always enough. Contractors working on the new Red Wings arena have paid hefty fines after failing to hire a minimum of 51 percent Detroit residents — a requirement for large new construction projects — even after hosting jobs fairs and training programs.

A little extra help — whether it’s internships and classes offered by private businesses or free community college offered by the state — can go a long way. But Savit said that the real key to making Detroit’s economy inclusive is education. “We need to have a school system that’s training Detroiters to get those jobs without the bridge programs we’re providing, to be college ready.”

Jamarria Hall may feel cheated, but he does also feel college ready, in spite of what he thinks of as a considerable skills gap. He said that literacy remains an issue for many of his former classmates — and himself.

“To be honest, probably most of them can’t sit there and read a real 12th grade novel,” Hall said. “I probably can’t…because my last couple years I don’t think that my reading skills have advanced that much. It’s not that they’re dumb, it’s just that they haven’t been taught the 9th through 12th grade necessities … and it probably goes back farther than that, too.”

Hall is spending the summer working for Wayne State University, boarding up abandoned houses and helping people install smoke detectors, before he heads to Florida to start community college in the fall. Hall wants to be an accountant. He said that getting through Detroit public school taught him to rely on himself.