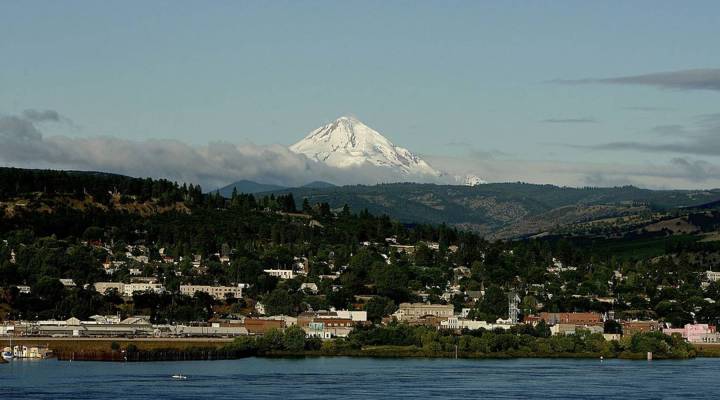 Mt. Hood rises in the background as the town of The Dalles is seen on the Columbia River June 15, 2006 in Oregon. Craig Mitchelldyer/Getty Images
Make Me Smart With Kai and Molly

Mt. Hood rises in the background as the town of The Dalles is seen on the Columbia River June 15, 2006 in Oregon. Craig Mitchelldyer/Getty Images

Kai and Molly interviewed former Columbia River Bar pilot Deborah Dempsey on Make Me Smart. Dempsey uses a lot of nautical lingo, so we created a quick glossary of terms.

Columbia River Bar: A system of bars and shoals where the Pacific Ocean meets the Columbia River, between Oregon and Washington. The bar is about 3 miles wide and 6 miles long. If you want to learn more, Columbia River Bar pilot Dan Jordan wrote a PowerPoint presentation on how to navigate the bar .

Wait, what’s a bar? Not the kind that serves drinks. It’s an elevated area of sediment deposited by a river’s flow.

And a shoal? A sandbank or sandbar that makes the water shallow.

Pilot: A sailor who maneuvers ships through dangerous or congested waters, such as harbors or river mouths. The Columbia River Bar Pilot organization was formed in 1846 to “ensure the safety of ships, crews and cargoes crossing the treacherous Columbia River Bar.”

Master mariner: The professional qualification required to serve as the captain of a commercial vessel of any size and any type, operating anywhere in the world.

“In the drink”: You’ve fallen in the water. This is not good. Each ship has specific procedures to follow when a crew member falls overboard. Here are U.S. Coast Guard procedures from the Boat Crew Seamanship Manual.

Pilot ladder: A highly specialized (and regulated) rope ladder that pilots use to get on and off ships. A pilot’s ladder is made of hardwood steps and manila rope. Every eight steps or so, a pilot ladder has a spreader, a longer step that keeps the ladder from twisting in the wind.

Freeboard: The distance from the waterline to the deck level.

Davit: A small crane or mechanical arm used to lower a lifeboat into the water, often used in rescue operations.

Breakers: Waves break when they become unstable and topple forward. You most often see this on a shoreline, but waves also break at the point where Pacific Ocean water meets Columbia River water. There are lots of different kinds of breakers. If you want to know more, ask a surfer.

Knot: A unit of speed equal to one nautical mile (1.852 km) per hour, approximately 1.151 mph. If you really want to get your nautical nerd on, check out the origin of the word knot.

Spring freshet: A sudden rise in the level of a stream, or a flood, caused by heavy rains or the rapid melting of snow and ice in the spring. This can change conditions for bar pilots.

Strong ebb: This a term that has to do with the rise and fall of tidal currents. When a tidal current moves the sea away from land, it ebbs. A strong ebb tide means the water moves quickly way from shore, so be careful.